Over at the Wi-Fi Alliance, an unusual Samsung device just received the certification required for commercial use. The device carries model code SM-G888No, which fits with information we received about a foldable device carrying a model number in the same range.

The certification document itself does not reveal any interesting details about the SM-G888N0, except for the curious fact it runs on Android 6.0.1 Marshmallow. Even by Samsung’s standards, it is late to release a device running on this older Android version, except, of course, when the device in question is a prototype anyway.

Almost a year ago, another device in this same series, the SM-G880, popped up, and we have since learned that that phone was codenamed Haechi. Haechi is a mythical beast in Chinese and Korean folklore: a unicorn with a lion’s head. The name does fit nicely for a device that can have multiple appearances, such as a smartphone that folds out and becomes a tablet.

Though we are not one hundred percent sure, we do assume the SM-G888 is a further-developed variant of the same device, and its visit to the Wi-Fi Alliance comes right at the time when multiple rumors suggest Samsung’s first foldable device is indeed being tested, possibly even seeing a very limited release later this year, even if broader commercialization won’t happen anytime soon. 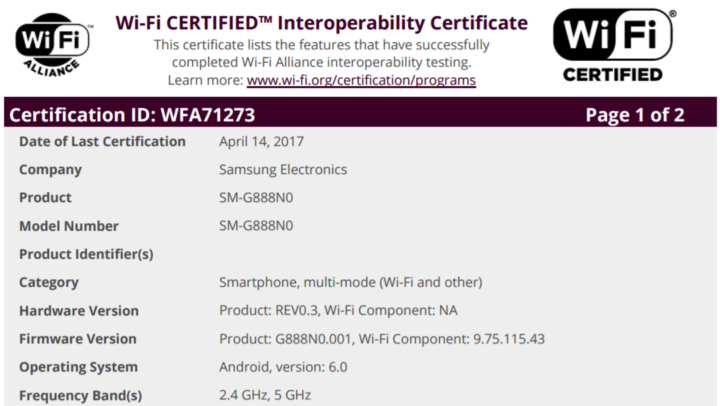