The Gear 360 is Samsung’s 360-degree camera announced last February that lets you capture both “circular” and still photos and virtual reality videos. We brought you an Amazon deal on the Gear 360 two weeks ago that would take 27% off the retail price, but a new deal today gives you the VR camera of your dreams for its lowest price yet.

Verizon is offering the Gear 360 for 71% off, down from $349.99 to $99.99 — $250 off from the original retail price. There are no strings attached here, except to say that you can either pay for the device upfront or have Verizon bill your account (Verizon has billed my account for the Gear 360, so account billing is an option for Verizon customers). 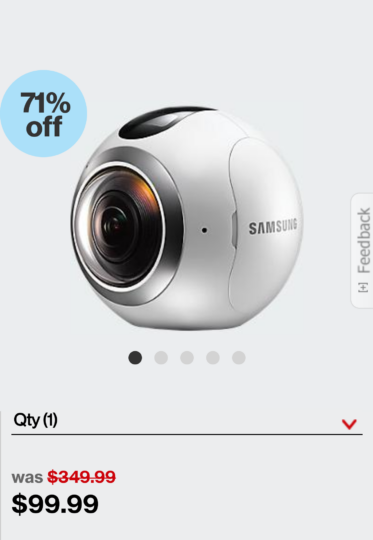 The Gear 360 camera features a 0.5-inch PMOLED (passive matrix organic light-emitting diode) display with a screen resolution of 72 x 32p, runs on a 1Ghz, dual-core processor with 1GB of RAM, 8GB of onboard storage with a microSD card slot for expandable storage, contains dual 15MP Sony IMX147 cameras with f/2.0 aperture, IP68 water and dust resistance (with housing; IP53 without), along with BT 4.0, 802.11a/b/g/n/ac WiFi, NFC, and a 1,350mAh battery. Check out our Gear 360 review before going all in.

This is a good deal, but you can either buy now or wait for the Gear 360 Pro set to arrive with the Galaxy S8 that has been cited on a renown import/export tracking website. Even if Verizon is doing this sale to clear out inventory to make room for the upcoming Gear 360 model, it’s still a good opportunity for buyers. Get your Samsung Gear 360 camera at the link below.

Have you picked up a Gear 360? Did you take advantage of this deal? Are you thinking about it? Come back and let us know if you did.

Update: The Gear 360 camera has sold out at Verizon, as it seems there was limited stock. We’ll let you know if this deal returns.

Thanks, Salvatore, for the tip!