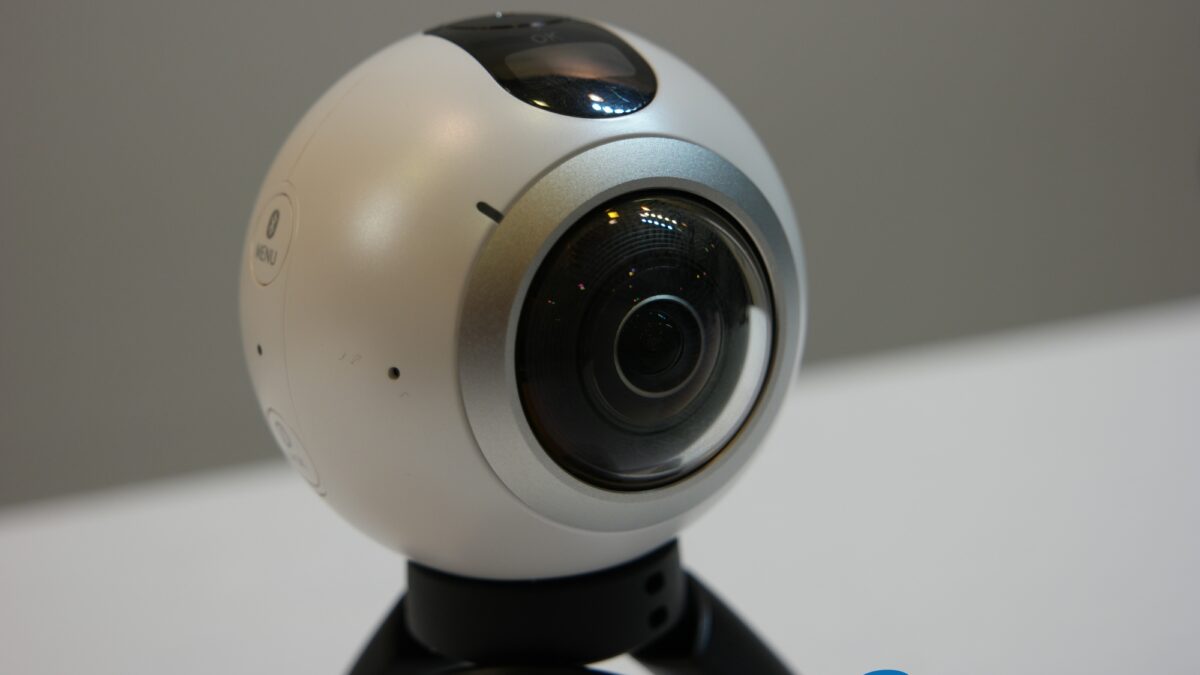 Along with the Galaxy S7 and the Galaxy S7 edge, Samsung has also announced its first 360-degree camera at its Unpacked 2016 event today. Dubbed Gear 360, the camera lets anyone create 360-degree images and videos easily. The company claims that the content created using its 360-degree camera is perfect to capture any moment, be it a party or a trip. Later, the captured media can be enjoyed in virtual reality using the Gear VR headset and a compatible smartphone.

The Gear 360 is equipped with dual 15-megapixel CMOS camera sensors, each with its own wide-angle fish eye lens. Both the sensors are accompanied by bright ƒ/2.0 lenses, so low-light conditions shouldn’t be a problem. Combined, these camera sensors help users in capturing 360-degree videos with a resolution of 3,840 x 1,920 pixels (30fps) or 30-megapixel (7,776 x 3,888) still images. There’s also an option to use one camera sensor to click 180-degree wide-angle images with a resolution of 15 megapixels.

The device sports a 0.5-inch PMOLED display that is used to show bits of information such as the number of images clicked, video recording duration, and other things. Samsung is using a DRIMe5s image processor that helps the device in saving videos in MP4 format (H.265). There’s a microSD card slot, and the device is compatible with upto 128GB cards. Connectivity wise, the Gear 360 features dual-band Wi-Fi ac/b/g/n, Wi-Fi Direct, Bluetooth v4.1, NFC, and a microUSB v2.0 port.

Another great aspect of this device is its portability, and it’s water- and dust-resistant upto a certain extent (IP53 certification). Samsung made this spherical-shaped camera small and light, so portability shouldn’t be a problem. Accelerometer and gyroscope are present as well. The removable battery in the Gear 360 has a capacity of 1,350 mAh, but the company hasn’t mentioned anything about its battery life yet.

Samsung has provided some basic options like sharpness, white balance, EV, and ISO limit. The ‘Wind Cut’ options cuts out wind noise from videos. The Gear 360 connects to smartphones using the Samsung Gear 360 app. The Gear 360 ActionDirector app for the PC comes in handy for editing images and videos. Not only this, when synced with a Galaxy device, users can preview the images and videos in real-time.

Users can also capture HDR images, time lapse videos, and looping videos. There will also be an option to either save the content on the connected smartphone or share it directly over social media services like Facebook, YouTube and Google Street View. It is compatible with the Galaxy S6, the Galaxy S6 edge, the Galaxy S6 edge+, the Galaxy Note 5 as well as the Galaxy S7 and the Galaxy S7 edge (obviously). The Gear 360 will be available starting Q2, 2016 in select countries.

Samsung will sell a tripod accessory, but the camera will also be compatible with various camera accessories and mounts that are already available in the market. Samsung’s aim was to create a complete ecosystem to help Galaxy users in easily creating compelling content and enjoying self-created content using the company’s mobile products, Galaxy smartphones, the Gear 360 camera, and the Gear VR headset.