We’ve long been reading about Samsung’s upcoming flagship smartphone (codenamed Project Valley) with a foldable display, and we’ve reported about a number of related patents that have been filed by the company. However, a patent application that was published earlier today not only showcases the latest development by Samsung but also offers clearer renders of what the actual device might end up looking like.

These images showcase the smartphone’s hinge from various angles. The hinge looks very familiar to that of the Microsoft Surface Book, and the device might end up having a similar cavity when it is folded. However, it will still be a huge step forward in the smartphone industry. The curved screen design was first introduced with the Galaxy Note Edge, and the Galaxy X might be the first smartphone with a completely foldable display.

The Galaxy X was expected to be launched by the end of 2016, but Samsung has reportedly pushed the launch date to sometime next year. What do you think about the concept of foldable smartphones? Are they the future? 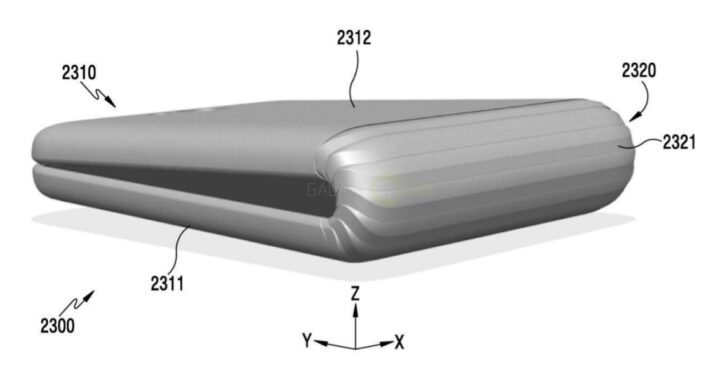 Samsung’s foldable smartphone is no longer a myth. The company has officially acknowledged its development on multiple occasions. Going one step further, Samsung’s mobile chief DJ Koh has said the much-awaited foldable smartphone, believed to be called the Galaxy F, will be revealed this year itself, probably at the Samsung Developer Conference (SDC) in November. […]

Enough has been written about Samsung’s foldable phone, but no one exactly knows how it looks or works. Relying on Samsung’s foldable screen patents, folks at Nieuwemobiel and concept phone designer Jonas Dähnert have fleshed out renders of what the foldable Galaxy smartphone might look like. Though the renders are based on Samsung patents, they […]

Samsung’s foldable phones to come as part of the Galaxy F series?

Wind back the clock to 2013. Rumors at the time had pegged Samsung as working on a new “super premium” Galaxy F series of smartphones in addition to the Galaxy S and Galaxy Note flagships that were launched each year. But nothing of the sort panned out. Samsung continues to release just two flagships each […]

We have long heard rumors that Samsung is working on a foldable smartphone. The company has dozens of patents related to the form factor. It has been consistently rumored over the past few months that the foldable smartphone, commonly referred to as the Galaxy X, will be released next year. A new report today by […]

Samsung’s rumored foldable smartphone, commonly referred to as the Galaxy X, has been the subject of many ‘leaks’ and reports in the recent months. From its display size to battery capacity to alleged pricing, a lot has been ‘leaked’ and speculated about the coveted Galaxy X. So far, most of the available information about its […]

If reports from the supply chain are believed, things are gradually falling into place for the mass production of Samsung’s much-awaited foldable smartphone that’s referred to as the Galaxy X. We recently heard that the company is going to start trial production of the foldable OLED panel in a couple of months before it begins […]