This is Samsung’s foldable display in action 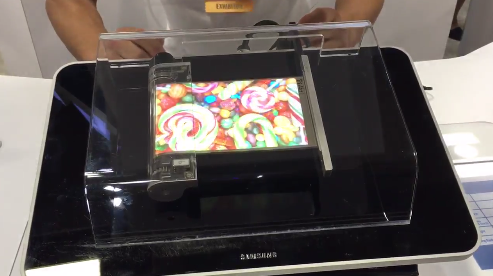 We reported a couple of days ago that Samsung is going to showcase its next-generation display technology at the SID Display Week 2016. The company is going to exhibit OLED displays for virtual reality devices, hologram technology as well as displays that can be rolled or folded. Samsung already has multiple patents that cover devices with foldable displays and it’s widely believed that the company will launch such a device at some point in the future.

A short video clip from one of the attendees at this annual conference shows us Samsung’s foldable display in action. It’s being exhibited in a controlled environment so the real capabilities of this display are not yet known, but it goes to show that this is something that Samsung is working on. It was reported a few weeks ago that Samsung has actually been working on a foldable smartphone since three years. We exclusively told you about Project Valley and it’s quite likely that Samsung Display will be tasked with making the foldable display for this unique smartphone. Development of a prototype is believed to have been finished already but it’s not clear as of now when the company intends to launch this smartphone.

Update: When fully opened out this 5.7-inch Full HD display provides a total pixel density of 386 ppi. The panel itself is just 0.3mm thin with a 10R rolling radius, allowing it to be rolled into a tube with a 10mm radius. Bear in mind that it measures in at 0.3mm without a touch layer which would not only add heft to the panel but will also impact its overall flexibility. This concept was powered externally which won’t be the case in a commercial device and adding a battery could further impact flexibility. Samsung was asked about the number of roll-ups and unrollings this OLED display can withstand before it eventually cracks or breaks, a representative of the company did not give any specific figures.

Samsung to choose from five hinge options for the foldable smartphone

Samsung to produce one million units of its foldable smartphone initia …