UPDATE: BlackBerry denies the report of Samsung offering a proposal for an acquisition. Check out the official statement by BlackBerry, below.

Samsung is apparently in talks with BlackBerry for a potential take over, reports Reuters. According to a “source familiar with the matter”, the South Korean company is interested in BlackBerry’s immeasurable patent portfolio, and executives from both companies met last week to discuss a potential deal.

Samsung offered Canada’s BlackBerry an initial price range of $13.35 to $15.49 per share, which would increase the value of the stock by 38-60%. The company’s enterprise worth will be around $6 to 7.5 billion. However, since the rumour hit the interwebz, BlackBerry’s stock has skyrocketed about 30% already, and currently stands at $15.02 per share. The Korean giant would have to give a better proposal now, if it really wants to acquire the company. 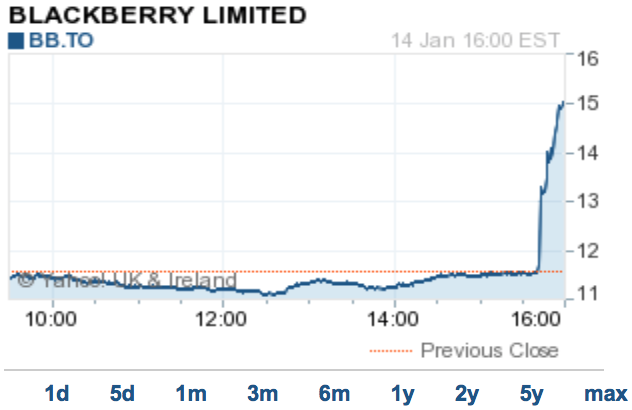 If this deal goes through, there will be two major outcomes. Samsung will own all of BlackBerry’s patents, which are alone estimated to be worth around $1 billion to $3 billion, and BlackBerry’s world-famous security platform.

Do you think the deal will go through? Let us know in the comments below.

US President Barack Obama has long been known to love BlackBerry handsets. When he first claimed the White House in 2009 he pushed to keep his BlackBerry but the agency that provides communications to the White House handed him a special BB 8830 with extra security features for unclassified email and calls. The world has come […]

Is BlackBerry testing Samsung’s Exynos 7420 chipset in its devices?

The Samsung-made Exynos 7420 is considered as one of the best SoCs of this year as it turned out to be more stable than the rival chipsets. The chipset was used exclusively in Samsung’s high-end devices and Meizu used it in the Pro 5 smartphone. Now, it seems that BlackBerry is testing its devices with Exynos 7420. We’ve stumbled […]

Samsung to partner with BlackBerry for a new smartphone?

Two years ago, Samsung started advertising BlackBerry Messenger on Galaxy devices, and since then, its partnership with BlackBerry has been flourishing. Samsung has been working on increasing its presence in the enterprise market – BlackBerry’s enterprise services, such as SecuSUITE and WorkLife, are already compatible with the Galaxy S6 and the S6 edge. Sometime late last […]