There have been innumerable rumours around the next Samsung flagship. Natural logic says it’ll be the Galaxy S6, unless Samsung decides to start an all new line of high-end phones, which we think isn’t very likely. Nonetheless, a device believed to be the Galaxy S6 (a European variant thereof — the SM-G925F) allegedly made an appearance on the database of popular benchmarking application, AnTuTu. That it’ll pack top-end specs was no doubt; the alleged AnTuTu listing only goes to reaffirm the belief.

If the screenshot below is authentic, the Galaxy S6 will come with a rather large 5.5-inch 2560 x 1440p display, a 64-bit, octa-core Exynos (the 7420) SoC, 3GB of RAM and a rather powerful set of cameras in a 20 mega-pixel rear and a 5 mega-pixel front (specs we’ve already exclusively revealed before.) Various storage variants are expected to be made available at launch, but from the screenshot it appears as though 32GB will be one among them. Lastly, the phone is also listed with Android v5.0 Lollipop, so Samsung has all you software junkies covered as well.

5.5-inch is a rather large screen size for a smartphone series; in fact, the second iteration of the Galaxy Note series had a screen that large. Therefore, we reckon you take this with a pinch of salt — or any other spice of your choice, for there’s not much that can be done to ascertain the authenticity of the claim. The phone is expected to launch early next year (despite the expected delays) along with an Edge variant, so there isn’t a lot of waiting you have to do anyway. 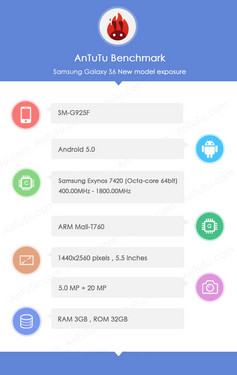