It has been a conflicting few weeks of reports about whether the Galaxy S III will be getting an update to Android 4.4 KitKat or not, but Samsung Arabia might just have given us some semblance of an official confirmation that the S III will be updated to KitKat. Responding to a user inquiry on Facebook, Samsung Arabia said that the “KitKat update will be available by end of this month” – a rumor back in January suggested the same time frame, lending a bit of credence to the possibility that the Galaxy S III won’t be spending its final days on Android 4.3 Jelly Bean.

SamMobile is unable to confirm if the KitKat update is indeed coming, as there are currently no development firmware based on KitKat for the Galaxy S III on Samsung’s servers – while that doesn’t mean there won’t be some in the future, it is a good indication that the update certainly won’t be out in March. The Galaxy S III has already received two major Android updates and is well past the standard 18-month support guarantee Android manufacturers provide, so it would be best to not be too hopeful for getting an official taste of the latest version of the OS on the device.

Update: Well, it looks someone at Samsung Arabia blurted out incorrect info without confirming with someone higher up, as they’ve now retracted and say that as of now there are no plans to update the Galaxy S III. This is in line with the fact that no KitKat firmware are yet available on Samsung’s test servers and rumors of Android 4.3 being its last update, so, again, don’t be too hopeful of seeing an update to KitKat. 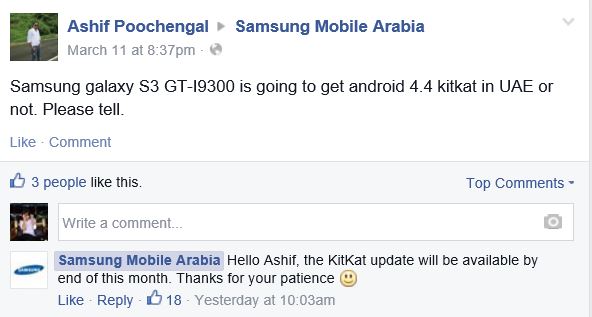 The Galaxy Note 10.1 has been one of those devices that Samsung chose to ignore for a long time before finally …