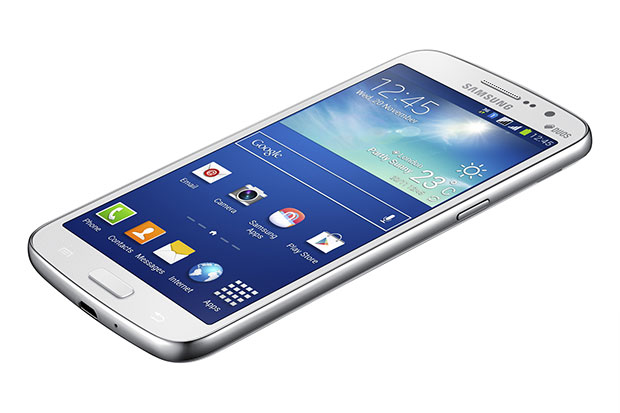 Remember the 5.25-inch device that was leaked a few days back? As it turns out, Samsung has announced the device and it is none other than the Galaxy Grand successor. Samsung rightly calls it the Galaxy Grand 2 and brings in better hardware and new design. Galaxy Note 3’s stitched faux leather back has also been adopted in this device as well and comes with a 5.25-inch 1280×720 HD TFT display.

The processor and RAM has also got an upgrade, which now comes with a 1.2GHz quad-core processor and 1.5GB RAM. Additionally, you’d find an 8 megapixel camera at the back, 1.9 megapixel HD camera on the front, 8GB of internal memory which is complemented with an external microSD card slot supporting up to 64GB. Other hardware features include Wi-Fi, Bluetooth 4.0, GPS, dual-SIM support and 2600mAh battery that promises up to 10 hours of playback and 17 hours of calls.

There’s no info on the price but the phone will be available in black, white and pink.

We’ve seen the Galaxy F in the past few days but this is the first time we’re seeing the device snapped alongside its elder sibling, Galaxy S5. While there’s not much to tell from the image, we do see the rumoured Galaxy F sporting a thinner bezel compared to Galaxy S5. According to the previous […]

T-Mobile users in United States will soon get a new device from Samsung, according to the latest leak. The device looks to be a mid-range one with 4G LTE support and slated for a launch sometime in July (going by the date on the lock screen). The phone will sell as Galaxy Avant (SM-G386) on […]

Samsung’s Galaxy S5 smartphone has been announced by NTT Docomo in Japan as part of its 2014 summer lineup. The carrier will sell the device from tomorrow along with Samsung Gear 2 and Gear Fit devices and will be available in white, black and pink. Japan is one of the first countries where a Pink […]

Samsung Mobile’s American subsidiary has uploaded new ads on their YouTube channel, showing off Galaxy S5’s important features. These ads don’t ridicule Apple’s offerings as we’ve seen in the past but are good enough and straight to the point explaining some Galaxy S5 features. The ads talk about Galaxy S5’s selective focus in the camera, […]

Samsung’s affordable Galaxy Grand successor with a large display and LTE-A support has been announced for the South Korean market. The Galaxy Grand 2 boasts a soft touch and stitch design at the back, 5.25-inch HD (720p) display that has an Optimal Wide View for better viewing experience and is powered by a 1.2GHz quad-core […]