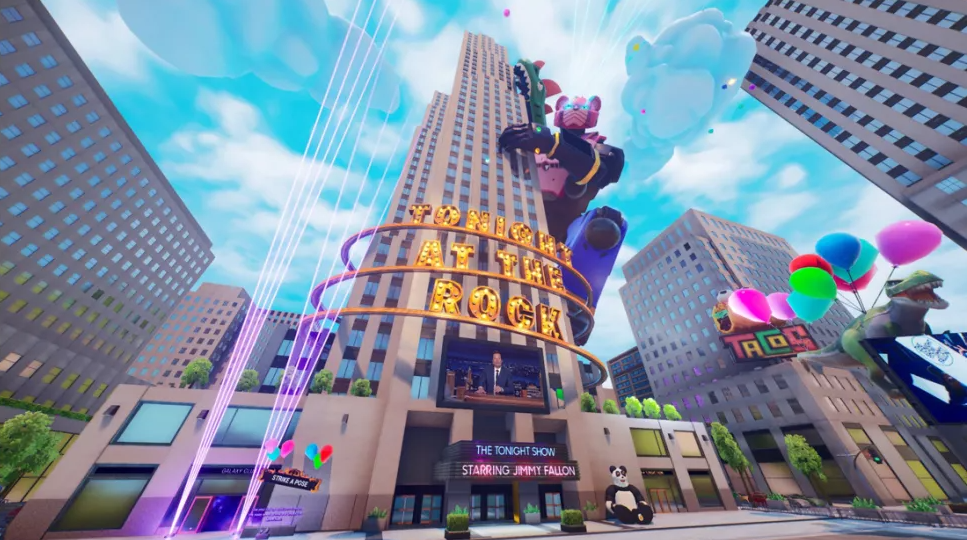 Fortnite players will soon have access to a new Party World themed after The Tonight Show Starring Jimmy Fallon. The late-night show is joining the metaverse in Fortnite as part of a Samsung sponsorship, and players will have the opportunity to play games, including pong on rooftops, and race up 30 Rockefeller Center.

The new Fortnite map will also feature iconic locations, such as the Tonight Show writers’ room and a virtual Samsung store. Furthermore, gamers can embark on a quest to help Jimmy Fallon get to Studio 6B. (via NextTV)

The “Tonight at the Rock” experience, which is enabled by Samsung’s Galaxy products and sponsorship, will be released on Tuesday and showcased in greater detail on Wednesday’s Tonight Show.

Senior VP of mobile experiences at Samsung Electronics America said “At Samsung, we’re always looking for opportunities to give users one-of-a-kind experiences with their Galaxy devices. Tonight at the Rock empowers fans with a unique social adventure right in the heart of 30 Rock, all enhanced through in-game Samsung power-ups made possible by the Galaxy ecosystem.”

Fortnite is available for numerous platforms, including PC, consoles, and Android OS.

In case you missed the news last month, this isn’t the first time Samsung has made an appearance in Fortnite. The company also released its “Smart City” in the Fortnite metaverse to promote the launch of the Galaxy Z Fold 4 and Galaxy Z Flip 4.

The entire virtual city is made up of structures that resemble Samsung’s products, from foldable phones to the Freestyle projector. Smart City went live in Fortnite on August 18.

As for the new “Tonight at the Rock” interactive map, NBCU said it isn’t sponsored or administered by Epic Games. More details should be unveiled later this week during The Tonight Show.