Samsung’s The Premiere series of projectors will be available for purchase in the UK starting today. Although The Premiere is not yet listed on Samsung UK’s online store as of this writing, it should hit the company’s virtual shelves before the end of the day and customers will also have the option of buying the product from partner retailer Harrods.

The Premiere lineup consists of two Ultra Short Throw (UST) laser projectors, namely the 120-inch LSP7T and the 130-inch LSP9T. The former is hitting the UK market for £3,999 whereas the latter will be paired with a £6,999 price tag.

Both the LSP7T and LSP9T are capable of 4K resolutions but only the LSP9T model supports both 4K and HDR10+. In fact, The Premiere LSP9T is the world’s first projector to offer this feature combo. Otherwise, both projectors boast smart TV features such as screen mirroring and access to Bixby and Alexa. The projectors ship with streaming service apps pre-installed, including Netflix, Disney+, Amazon Prime, YouTube Plus and more.

Samsung is not only bringing The Premiere to the UK but it has also prepared a promotion for prospective buyers. Those who purchase The Premiere before January 19, 2021, will be eligible to claim up to £700 cashback. Samsung’s wording suggests that some customers may receive under £700 cashback but the criteria are unclear.

The Premiere series boasts Filmmaker Mode which, according to Samsung, is a first-of-its-kind setting on a projector. Meanwhile, the more expensive LSP9T model includes a built-in 40 watts 4.2 channel audio system and takes advantage of Acoustic Beam technology, which Samsung claims to bring cinema-grade sound quality to the living room. 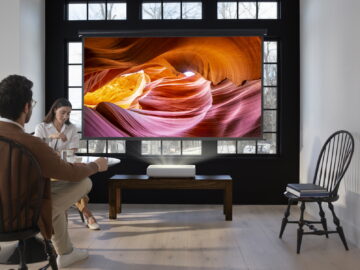