Samsung’s official Twitter account posting from an iPhone is nothing new. The company’s marketing team has made such blunders in the past, and it looks like Samsung is at it again. This time, the company has referenced Apple’s iPhone inside its own Members app.

A Samsung Community Manager in South Korea has reportedly posted a banner on the Members app to promote Samsung’s One UI Galaxy Themes. So far, so good. However, the banner shows a few Samsung themes on a stylized model of an iPhone rather than a Galaxy smartphone, which is very unusual. By the looks of it, the stylized model is a rough representation of an iPhone X, iPhone 11, or iPhone 12 — see the screenshot below.

It’s almost as if whoever created the promotional banner is unfamiliar with Samsung Galaxy devices. And although it’s easier to see how Samsung’s social media marketing department could make this kind of mistake, this banner was reportedly posted by a Samsung Community Manager, which makes matters worse. (via TizenHelp)

iPhones — especially models featuring the prominent display notch — have a distinct design that’s easy to recognize. It’s often why the generic iPhone design is used as a placeholder in third-party app ads, even on the Google Play Store. But again, this time, we’re looking at a Samsung Members banner that’s supposed to promote Galaxy Themes, so the use of the generic iPhone design is inappropriate and borderline controversial.

If anything, these types of occurrences only serve to give iPhone fans more ammo against Samsung customers. It leads to mockery and probably doesn’t help Samsung‘s image one bit. So it is somewhat perplexing that a Samsung Community Manager could’ve made such an error when pushing this ad to the Samsung-exclusive Members app. There’s no official explanation as to why this happened, and we’ll probably never know. 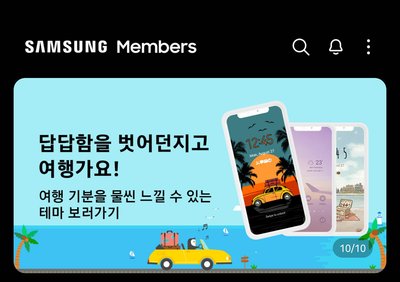