You would expect this from influencers or celebrities who take money to promote products that they don’t actually use but not from an official Samsung Twitter account. However, one has been caught tweeting from an iPhone yet again. The official Twitter account for Samsung Nigeria sent out a tweet promoting the Galaxy Note 9’s display. It did that from an iPhone.

You’d expect the people running the account to be mindful of the optics. They should be aware of how bad it would look if a tweet promoting the Galaxy Note 9 was posted from its chief rival. Perhaps that irony was lost on the social media team.

The gaffe was spotted by noted tech YouTuber Marques Brownlee or MKBHD. It didn’t take long for someone at Samsung to notice. The tweet was taken down and even the entire account was deactivated for some time. The account has since been restored and that tweet is nowhere to be found.

This isn’t exactly the first time that something like this has happened. An official Samsung Twitter account for Saudi Arabia made a similar mistake last month. It also sent out a tweet promoting the Galaxy Note 9 from the Twitter for iPhone app.

The accounts are likely being run by digital marketing firms hired by the company. They would certainly have got an earful from Samsung over this mistake. These things tend to happen but it certainly doesn’t reflect nicely on the company. It would be in Samsung’s own interests to ensure that the people running its social media accounts don’t make such mistakes in the future. 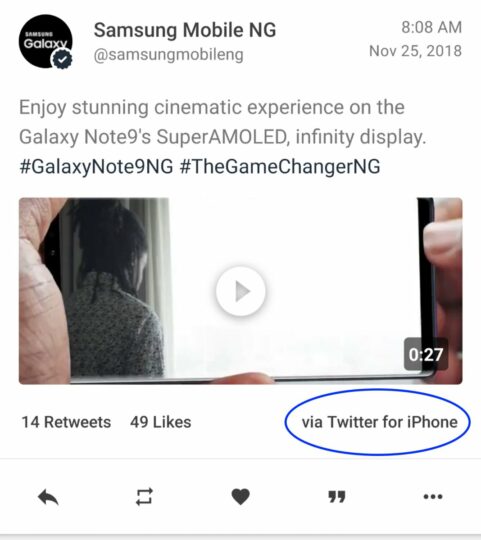