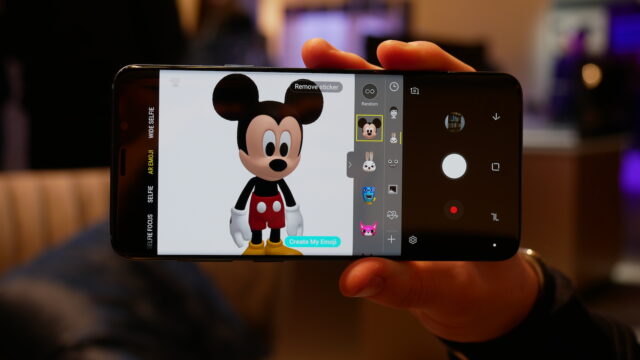 Apple and Disney have a long and close relationship. Apple co-founder Steve Jobs used to be on the company’s board while Disney’s CEO Bob Iger is a member of Apple’s board. Steve Jobs also owned 138 million Disney shares which were transferred to a trust run by his widow Laurene Powell Jobs after his death in 2011. Even though she cut the trust’s stake in Disney by half last year, he remains the beneficial owner of 64.3 million Disney shares which translates into a 4 percent stake in the company.

Apple’s product demonstrations often highlight Disney content so one wouldn’t imagine Samsung of all companies to somehow swoop in and get itself a sweet deal.

Samsung pulls a fast one on Apple

As we have already detailed in our detailed post on the Galaxy S9 AR Emoji feature, Samsung has teamed up with Disney to bring its characters to the AR Emoji feature. The Galaxy S9 and Galaxy S9+ will ship with Mickey Mouse so you can use the character instead of your own digital likeness to create AR Emojis based on your facial movements.

Samsung also confirmed during the event today that characters from other Disney properties like The Incredibles will be rolled out as well. Mickey Mouse may have hit close to home to Apple fans given that the iconic rodent has long been a watch face option for the Apple Watch. One can only imagine that this partnership will pave the way for other Disney characters to land on the Galaxy S9 and the Galaxy S9+ for your amusement.

It’s unclear if a similar deal would be offered to Apple that already launched its own animated emoji feature called Animoji with the iPhone X. Apple fans would really feel that they got the short end of the stick if it turns out that Disney plans on keeping this exclusive to Samsung.

One can only wonder how Samsung managed to pull this off.