After months of beta testing, Samsung has finally started rolling out the Android Oreo update to the Galaxy S8 series. As part of the update, Samsung Experience UI has also been updated to version 9.0. Along with a long list of new features and improvements, the UI update also brings new emoji design to Samsung devices.

Emoji design is not standardized and often varies based on the device, OS, and even apps. In the past, Samsung’s emoji design has been criticised by many users for its unorthodox design choices and inconsistencies. Samsung using a cracker to denote what is a cookie in other emoji libraries is a commonly cited example of its inconsistency. It looks like Samsung finally realized that its emoji needed a redesign and did precisely that with the new Android 8.0 Oreo update.

The new Samsung emoji library is not a radical redesign, but rather a refinement of the existing design language. From my initial impressions, the new emoji look better and more accurate in what they are trying to communicate. With the new redesign, Samsung emoji now look similar to the competition which should ensure a more consistent experience for the users. Samsung has also opted for the standard “Simpsons yellow” as the default skin tone for people and body part icons like most other emoji sets.

Emojipedia has done an in-depth analysis of the new Samsung emojis and it’s worth a read if you want to dwell deeply on all the changes. 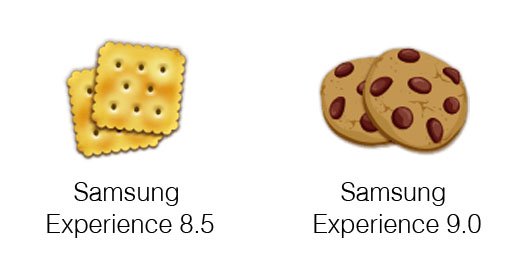 P.S. Along with the redesign, the update also brings new emoji icons.