Samsung appears to be developing a new pair of neckband earbuds, except they’re a bit unusual. The company is seemingly trying to combine the Galaxy Buds TWS (totally wireless) and neckband earbud form factors into a single product, the latter of which was showcased at WIPO (World Intellectual Property Organization) recently. Samsung applied to secure the patent with WIPO as early as March last year. However, the documents were published just a few days ago over the weekend and later found by LetsGoDigital.

The application contains a few sketches depicting Samsung’s idea of a hybrid earbud design. “Hybrid” in the sense that it consists of a standard pair of wireless Galaxy Buds complete with a charging case, as well as a separate neckband accessory that can attach one earbud to each of its two ends. And admittedly, the whole thing looks bizarre. 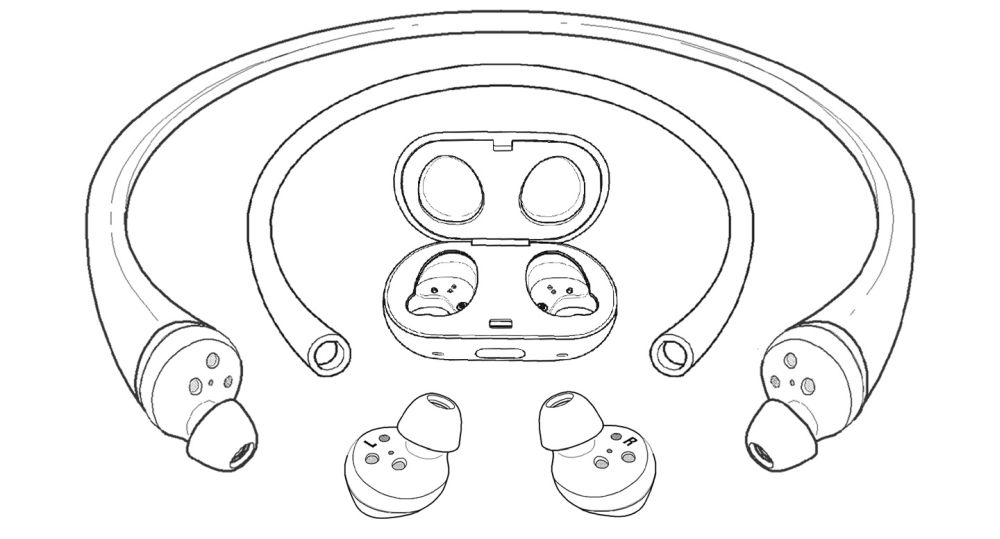 Neckbands aren’t usually “totally wireless.” They have short wires connecting the earbuds to the neckband itself, similar to the Samsung Level U2 and the U Flex. On the other hand, Samsung’s patent application depicts a neckband with two earbuds attached to its rigid ends without any wires, and it doesn’t look very ergonomic. Then again, we might be missing some key bits of information.

Neckband earbuds can be useful during heavier workouts or swimming sessions, so the idea of a hybrid design is intriguing. The simple neckband attachment shouldn’t require any expensive hardware of its own, though it does seem capable of sensing touch inputs, and it could, in theory, feature a battery capable of holding extra charges for the earbuds.

Now, unfortunately, there’s no guarantee that a design showcased at WIPO will become a real product. The earbuds depicted in the sketches resemble the Galaxy Buds Plus more than subsequent models, but then again, the idea is what matters most and it could very well be applied to future earbud designs.

It’s not a new idea, on account that it was filed more than a year ago, but who knows?! Perhaps Samsung will eventually release a pair of totally wireless Galaxy Buds that can convert to neckband earbuds through a simple attachment. Would you be interested in this sort of product? Leave a comment below.

Samsung unveiled the Galaxy Buds Pro alongside the Galaxy S21 today, and they are the company’s best-ever tr …