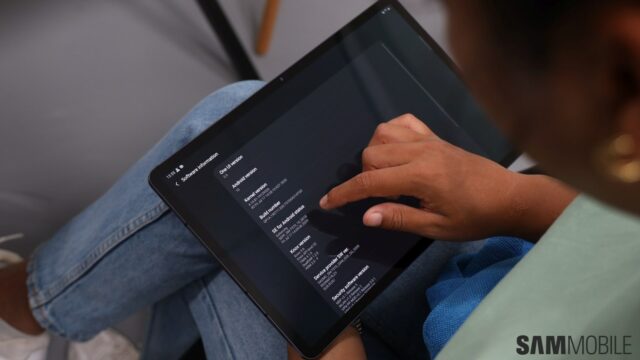 It has been known for a while now that Samsung has a new flagship tablet series in the pipeline. The new lineup has three models – the Galaxy Tab S8, Galaxy Tab S8+ and an all-new completely bonkers Galaxy Tab S8 Ultra.

These tablets will be packed to the brim with the latest tech and features. The Galaxy Tab S8 Ultra is going to be particularly noteworthy. Some renders of these tablets have leaked online previously. Now, we’re thrilled to see the new series in the flesh.

Here’s your first look at the Galaxy Tab S8 lineup

Samsung hasn’t confirmed as yet when it plans on unveiling the Galaxy Tab S8 series. Reports indicate that the launch may take place in the coming weeks. That does appear to be the case as Samsung is going through the process of completing all the regulatory filings it needs to in order to launch the series.

Samsung is using its new BRS technology for thinner bezels on the tablets. The Galaxy Tab S8 Ultra will be the only model in the lineup to have a notched display for the selfie camera. If you look closely enough, you can make out that notch in the tablet’s image.

The tablets will be powered by the latest flagship chipset from Qualcomm, the Snapdragon 8 Gen 1 with plenty of RAM and storage options. 5G and S Pen support will also be offered on select models.

No confirmation as yet from Samsung when these tablets will arrive. We can only hope that they hit shelves sooner rather than later.

Reserve your Galaxy S22 from Samsung to get a $50 discount and more!

Amazon has leaked virtually everything about the Galaxy Tab S8 series