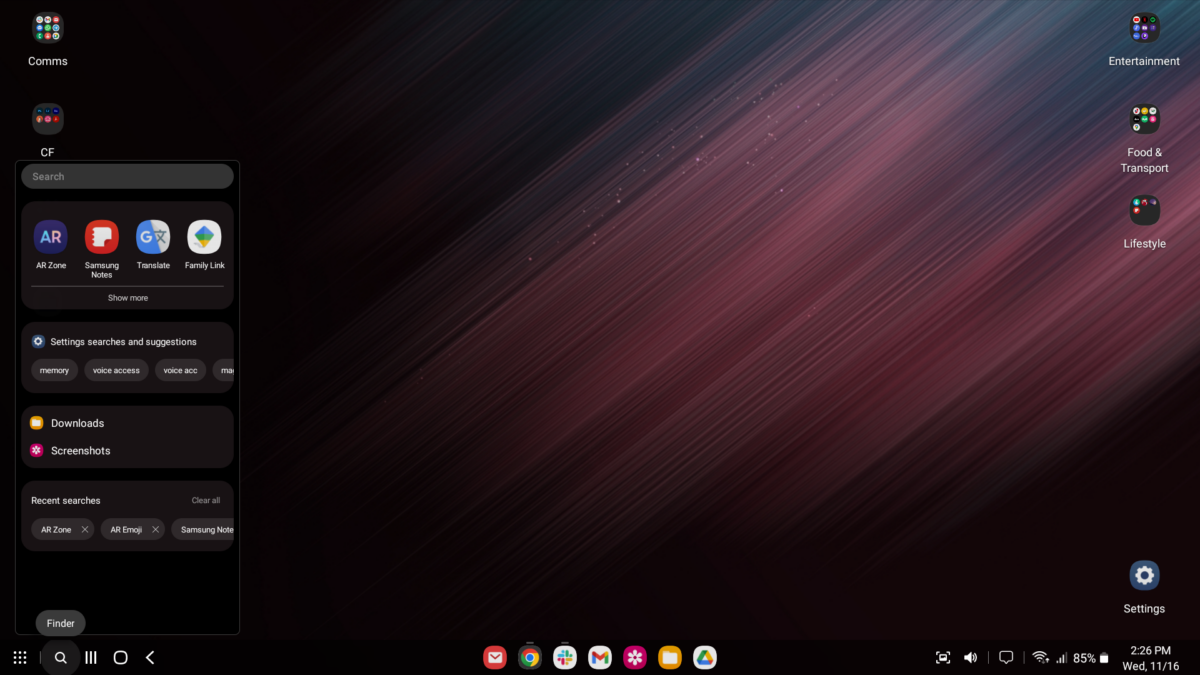 Beyond better optimization, Samsung’s One UI 5.0 firmware update brought a handful of new features, including lock screen customization options, new multitasking gestures, and Modes and Routines, to name a few. But the update hasn’t stopped at improving the user experience for mobile. One UI 5.0 also brings a couple of new features to Samsung DeX, such as a taskbar-embedded Finder and new taskbar settings.

One of the first things that Samsung DeX users might notice once they fire up the desktop environment in One UI 5.0 is better performance. The other thing will probably be the addition of a magnifier icon to the taskbar. When pressed, this new button summons Finder in a pop-up, similar to what you’d see on a Windows-powered PC.

True to its name, Finder lets you type in various search terms. This is not the same feature as “search” in the apps drawer, as it allows you to search for more than just apps installed on your device. Using this new magnifier button from the DeX taskbar in One UI 5.0, you can search for apps, device settings, and contacts on your Galaxy device quickly and conveniently.

Finder icon can be enabled/disabled via new DeX taskbar settings

The “Taskbar settings” screen includes some new and some existing taskbar-related quick toggles. From here, DeX users can enable or disable the “Auto hide taskbar” feature or hide taskbar shortcuts, including “Navigation buttons,” “Language,” “Keyboard,” and “Sounds,” as well as the “Screen capture” button and, of course, the new taskbar-embedded Finder. This settings menu is new in One UI 5.0 (left screenshot), and you won’t find it in Samsung DeX on One UI 4.1.1 (right screenshot).

One UI 5.0 is available for a handful of Galaxy flagship phones that support Samsung DeX, including the Galaxy S20, Galaxy S21, and Galaxy S22 series. The update continues to expand and should soon be available for more phones and tablets in more regions. If you want a closer look at other non-DeX-related features in One UI 5.0, check out our videos below.