The SM-N986U (US carrier variant) and the SM-N986U1 (US unlocked variant), which are the variants of the Galaxy Note 20 Ultra for the US market, have passed through FCC’s certification process. Documents supporting the certification reveal that the upcoming smartphone will use Qualcomm’s SM8250 modem (a part of the Snapdragon 865 chipset) for 2G, 3G, and 4G connectivity, and the SDX55M modem for 5G NR connectivity. As rumors point out, we expect the smartphone to use the Snapdragon 865+ processor.

The Galaxy Note 20 Ultra will also support Verizon’s mmWave 5G networks through UWB connectivity. The FCC documents also reveal other connectivity features of the Galaxy Note 20 Ultra, including GPS, VoLTE, VoWiFi, Wi-Fi 6, Bluetooth with LE, ANT+, NFC, and MST (for Samsung Pay). The phone also features reverse wireless charging, something that has been a part of Samsung’s high-end smartphones for over a year now. 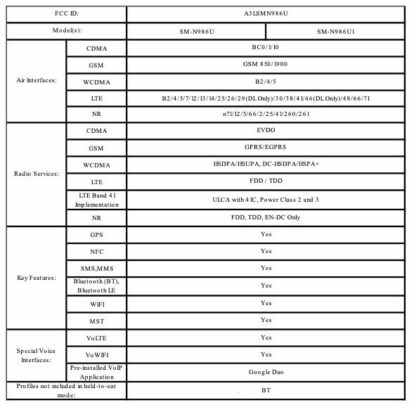 Samsung’s upcoming Galaxy Note series smartphone features a 6.9-inch Super AMOLED Infinity-O display with QHD+ resolution, a 120Hz refresh rate, and HDR10+. It has a quad-camera setup, consisting of a periscope-style optical zoom camera and a 3D ToF sensor. Leaked images have revealed that the phone will run Android 10 out of the box with One UI 2.5.

The phone will come with an S Pen, and it is expected to be powered by a 4,500mAh battery. The phone will come bundled with a 25W fast charger. We can also expect the Galaxy Note 20 Ultra to feature stereo speakers, IP68 certification for dust and water resistance, 12GB RAM, 256GB UFS 3.1 storage, 8K video recording, and an in-display fingerprint reader.