That hasn’t gone down well with fans, and the first benchmark of the Exynos 990-powered Galaxy Note 20 Ultra won’t do anything to change their opinion. That’s because the benchmark can’t really tell us if Samsung has fixed the main issues with the Exynos 990: Its tendency to heat up, throttle the GPU in long gaming sessions, and draw too much power when high performance mode is enabled. A recent rumor suggested Samsung has ‘heavily’ optimized the Exynos 990 for its second outing, but it remains to be seen if that is actually the case.

The benchmark does confirm that performance levels of the Galaxy Note 20 and Galaxy Note 20 Ultra will be similar to the Galaxy S20, S20+, and S20 Ultra, which shouldn’t come as a surprise as both flagship series have the same processor inside. And while a single benchmark isn’t enough to tell the complete story, the Exynos variants will seemingly fall further behind the Snapdragon variant in multi-core performance, thanks to the switch to the Snapdragon 865+ on the latter.

The Galaxy Note 20 series is going to be unveiled in just five days at Samsung’s virtual Unpacked event and will be accompanied by the Galaxy Z Fold 2, Galaxy Tab S7 and Galaxy Tab S7+, Galaxy Watch 3, and Galaxy Buds Live. Hopefully, the Korean giant will have a good explanation this time around for its decision to sell a superior version of its latest flagship in select markets, instead of the PR-laced non-answer it offered us earlier this year. 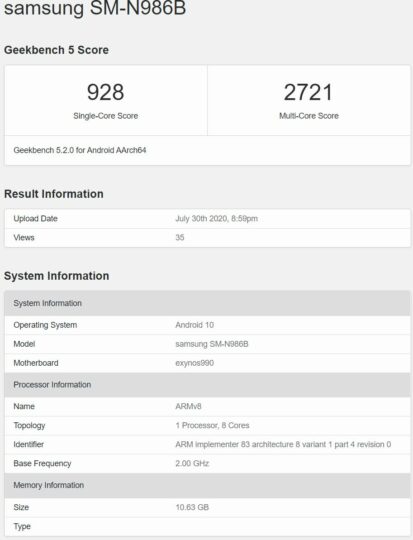