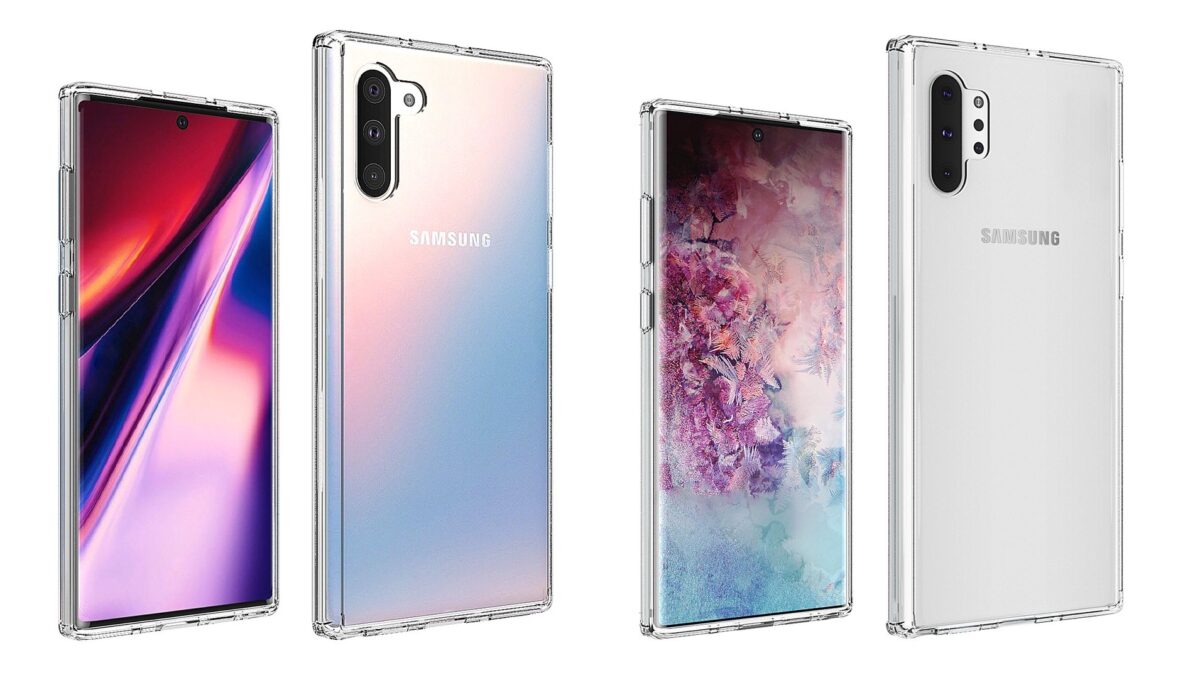 The Galaxy Note 10 and its bigger sibling have been spotted once again in a series of case renders. They reveal much of the same characteristics which have been floating around for the past several weeks, and they leave very little to the imagination – assuming this is indeed the flagship’s final design.

The Galaxy Note 10+ is showcased in a more toned-down white color whereas the standard Galaxy Note 10 seems to be sporting the Prism White gradient. This is in addition to the black color option spotted last week. The Bixby button appears to be missing, for better or for worse; unless Samsung removed the Power key, which is more unlikely to have happened.

Sadly, these fresh case renders further strengthen the fears of some Galaxy Note enthusiasts because they show no 3.5mm headphone jack. There have even been rumors that the microSD card slot may not be present on the Galaxy Note 10. On the plus side, the source of these renders previously claimed that the wider hole at the top edge of the Galaxy Note 10 and Note 10+ conceals an IR blaster. If true, this might score a few points in the eyes of some prospective buyers who miss having the ability to control their TVs and air conditioning units using their smartphones. It is, however, still an unsubstantiated rumor so perhaps don’t hold your breath for it just yet.

Overall, the Galaxy Note 10 and Note 10+ share the same design language which looks very slick. They also appear to share the same features and shortcomings, except for their size difference – which can’t really be noticed in these renders – and their camera configurations.

Both models have a centered front-facing camera and three main sensors at the back, presumably taking advantage of three-stage variable aperture. But the Galaxy Note 10+ is once again depicted as having a Time-of-Flight (ToF) module below the LED flash, in addition to the triple-camera combo. It remains to be seen if the two phones will differ in other ways internally.

We will find out more about the upcoming Galaxy Note 10 series sooner rather than later. Samsung already confirmed that the flagship will be unveiled on August 7 in New York City.