Galaxy A90 could arrive with Snapdragon 855, ‘exclusive tilt OIS’

The Galaxy A90 was expected to be the first mid-range Galaxy smartphone with 5G connectivity, but it looks like the A90’s specs could make it spill over into flagship territory, at least as far as the silicon under the hood is concerned. According to Twitter leakster OnLeaks, the Galaxy A90 will be powered by the Snapdragon 855 chipset, the same one that powers the Galaxy S10 in markets like the US and China. The Snapdragon 855 will apparently power both the LTE and 5G Galaxy A90 variants, and the 5G variant will feature an “exclusive Tilt OIS tech.”

Only the LTE model (SM-A905) is said to sport OIS, and it will reportedly have a triple rear camera with a 48MP primary sensor (not a 32MP one as had been rumored previously) flanked by 12MP and 5MP sensors (we’re assuming these will be ultra-wide and depth sensors respectively). The 5G variant (SM-A908) will apparently come with a 48MP+8MP+5MP setup. Like the A80, the A90 should have a sliding and rotating camera mechanism, allowing the use of the entire rear camera setup for selfies. 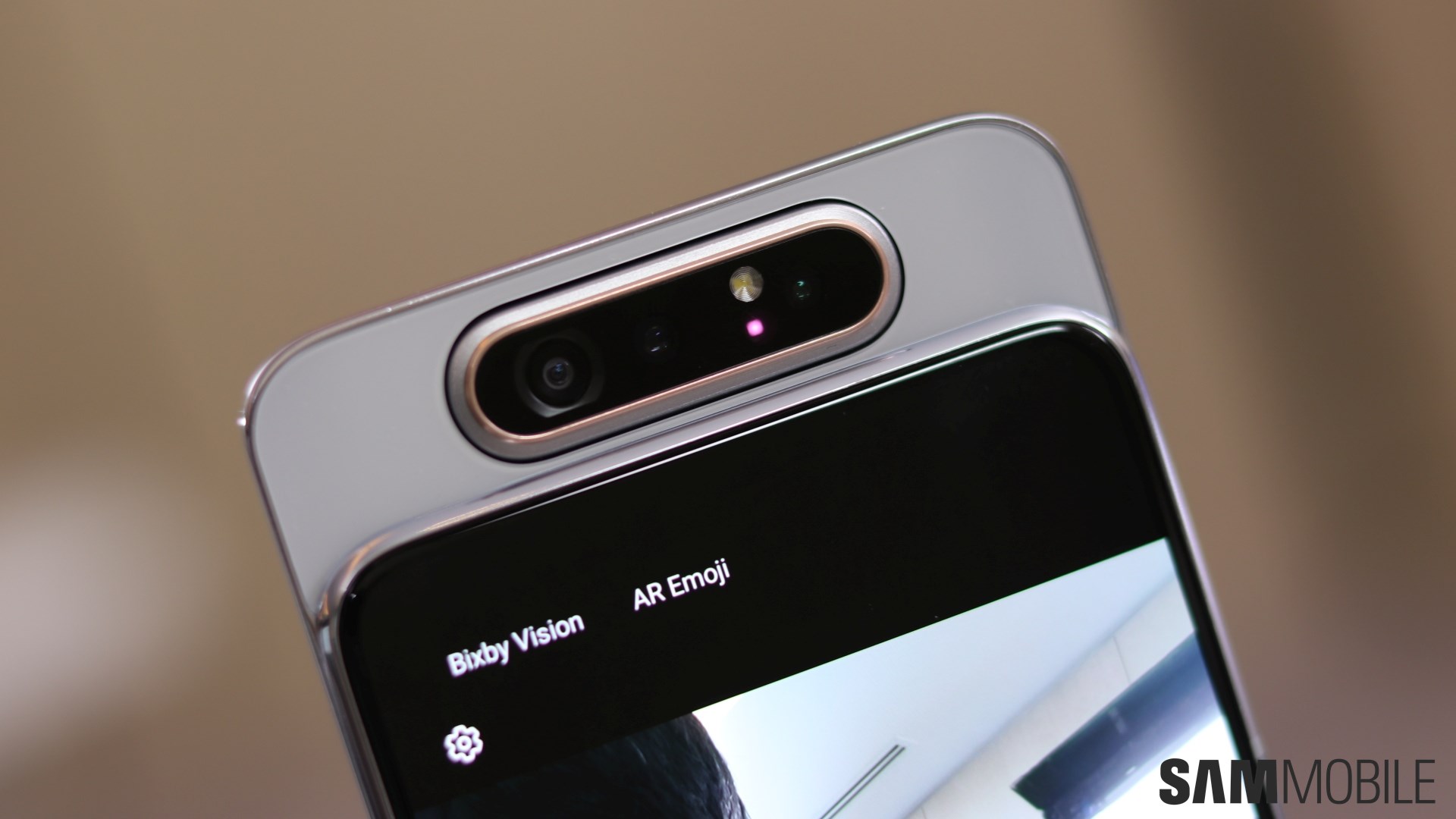 OnLeaks doesn’t say if a ToF (Time-of-Flight) sensor is included, though. The Galaxy A80 has one (see the pink light in the picture above) for bokeh in videos and for augmented reality applications, and a ToF camera can technically enable advanced Apple Face ID-like facial recognition as well. Samsung isn’t offering any on the Galaxy A80 or the Galaxy S10 5G, but hopefully it will do so on the Galaxy A90.

Other specs include a 6.7″ display with in-display fingerprint sensor

And while you may be wondering why Samsung wouldn’t use the Exynos 9820 instead, it’s a good thing the company isn’t doing that. First off, the Exynos 9820 does not have 5G connectivity built-in. Furthermore, the Snapdragon 855 is made on a 7nm process while the Exynos 9820 uses an 8nm manufacturing process, and the former has been seen to be noticeably more power efficient on the Galaxy S10 lineup. The Snapdragon 855 also allows the Galaxy Fold to offer impressive battery life despite the rather humble battery capacity on Samsung’s foldable phone.

We just hope Samsung doesn’t delay the Galaxy A90 as much as it has delayed the Galaxy A80. The company needs to be quick with such experimental devices, and if it keeps the A90 in the oven too long, the only thing worth praising about the device when it comes out may be its ability to connect to 5G networks.