Samsung doesn’t even care about hiding the Galaxy S22 anymore

It seems like Samsung itself is no longer concerned about keeping the Galaxy S22 series under wraps. Promotional materials for the lineup have already gone up at one of its carrier partner’s stores. Samsung has itself started posting those materials on its official social media channels.

There’s little reason to keep the Galaxy S22 series a secret anymore. Just a couple of weeks ago, the entire marketing presentation for the Galaxy S22 was leaked online. It revealed almost everything we need to know about the series.

It’s safe to say that anyone who’s looking forward to the new devices already knows much about them. There’s won’t be much that Samsung can surprise us with on February 9, 2022 when it formally unveils the Galaxy S22 series online.

Samsung has posted a promotional image on its own Facebook page that shows the Galaxy S22+ and the Galaxy S22 Ultra, the latter complete with its S Pen as well. A similar image can also be seen inside an AT&T store in the United States.

Hiding the devices doesn’t matter much at this stage. The event itself is scheduled for February 9, 2022. That’s when Samsung will officially unveil everything about its upcoming devices. 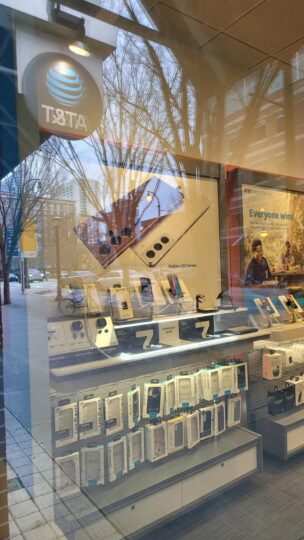