Initial reports about the successor suggested that it will have a 17.5-inch display. Some of you might remember that the original had an 18.4-inch display. The device also had an integrated book-like hinge that acts as a stand.

The Galaxy View didn’t really do that well and Samsung never released a successor. It might be willing to give it another go or perhaps a carrier partner has convinced Samsung to launch a new one. We hear that the Galaxy View 2 will be headed to AT&T in the United States when it arrives. Whether or not an unlocked version is released in other markets across the globe remains to be seen.

According to this benchmark listing, the Galaxy View 2 specs include an Exynos 7885 processor with 3GB of RAM. If that doesn’t seem impressive, remember that the Galaxy View didn’t have specs to write home about either. The listing mentions Android 8.1 Oreo but there’s a possibility that the device could ship with Android 9 Pie.

What’s unclear is when this device, bearing model number SM-T927A, is going to be launched. AT&T and Samsung have kept mum on the matter so far. The device did receive its Wi-Fi and Bluetooth certifications about five months ago and there hasn’t been much talk about it since then. We’ll be sure to let you know if and when more information arrives about this device. 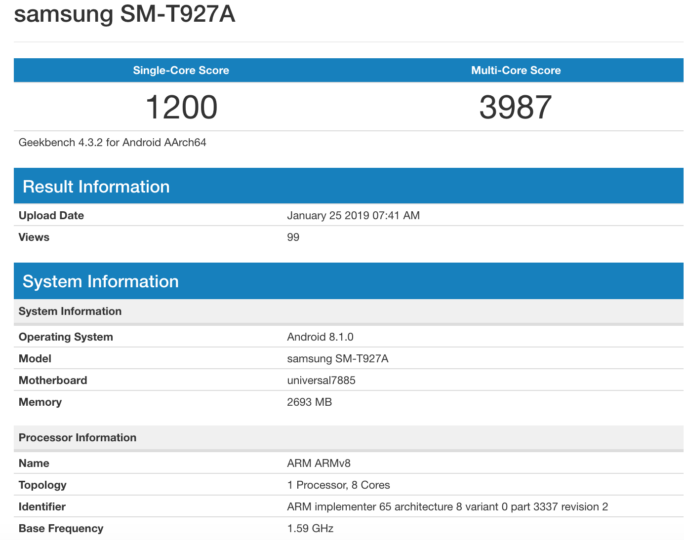