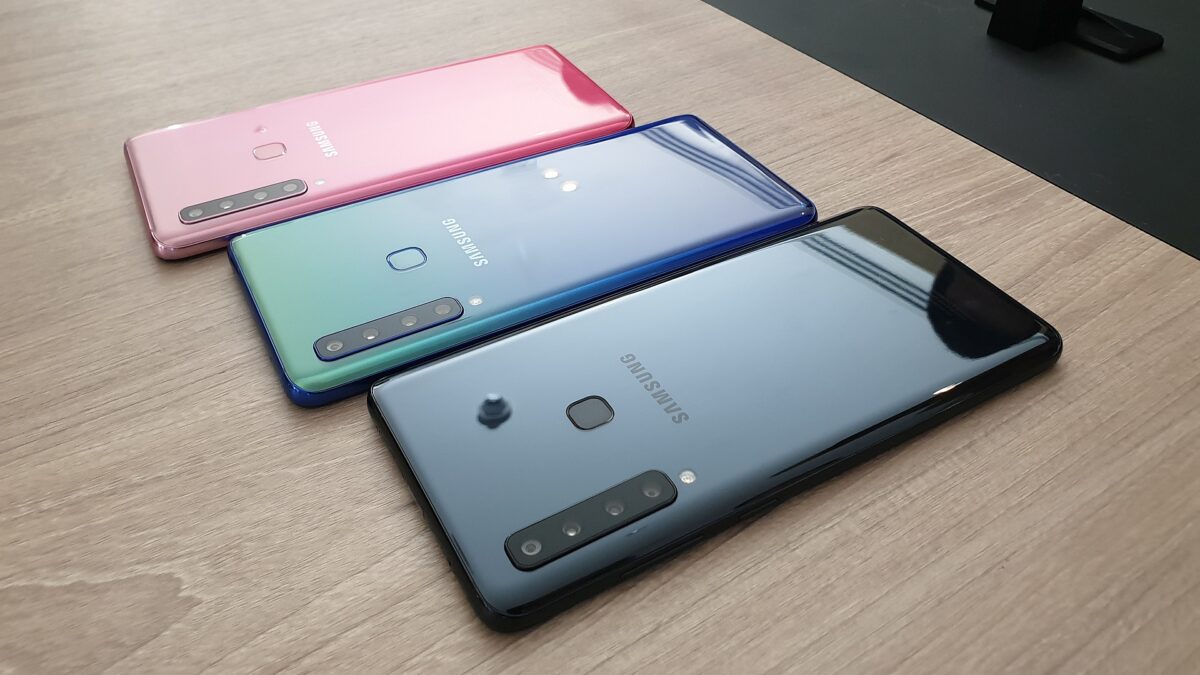 Not long after Samsung launched its first smartphone with a triple-camera at the back, it’s following that up today with the Galaxy A9. It’s the world’s first quad-camera smartphone. That’s a fact that Samsung reminded us multiple times during today’s event in Kuala Lumpur. It’s quite the about-face for a company that not too long ago said it didn’t want to be the “world’s first” if it meant rushing things.

Let’s get one thing clear right off the bat. The Galaxy A9 is a mid-range smartphone through and through. It may boast four cameras that not even flagships from Samsung have had yet, but that’s where the USP ends. Everything else is certifiably mid-range Samsung, with much of its similar to the Galaxy A8 Star (read our A8 Star review here).

Galaxy A9 hands on 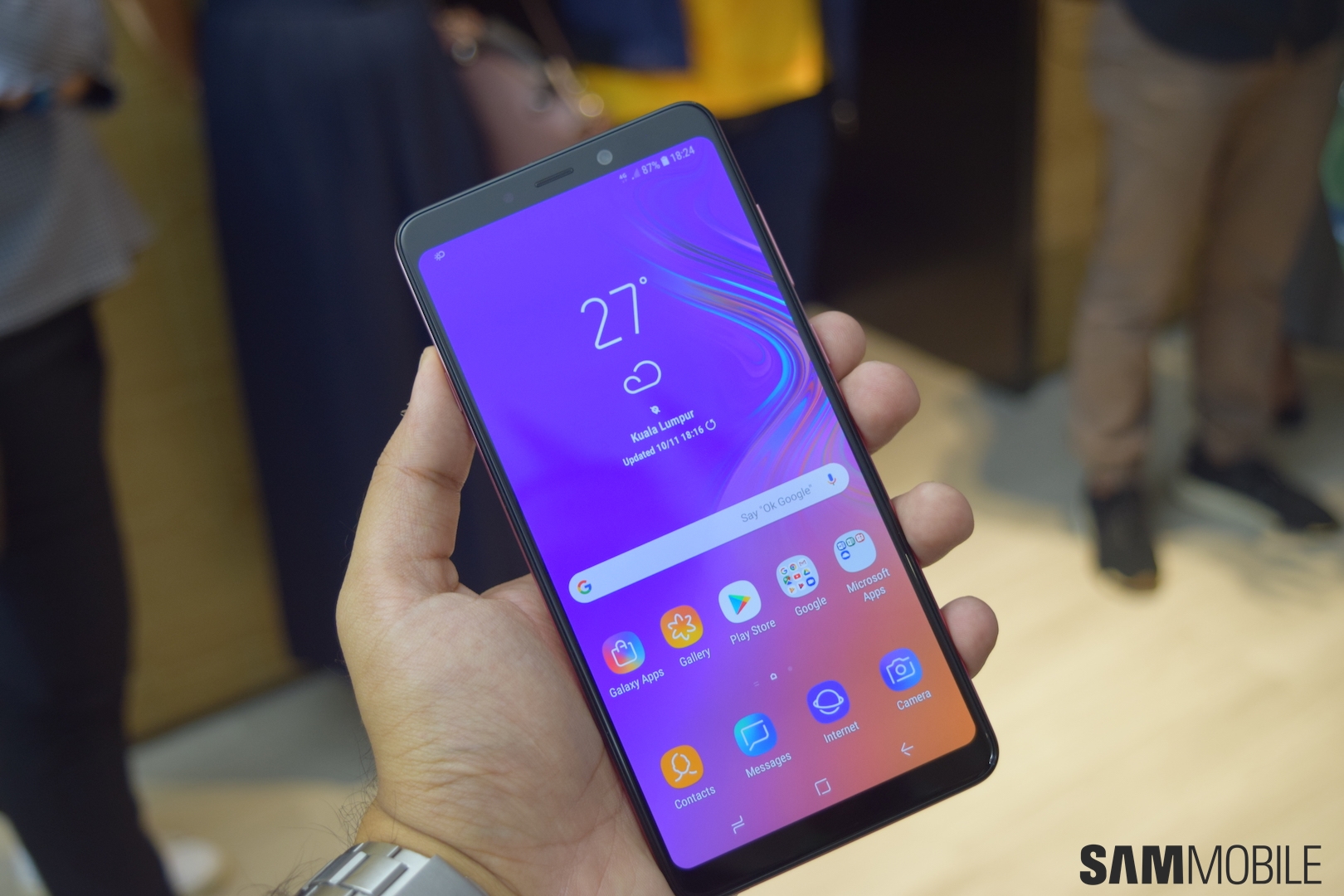 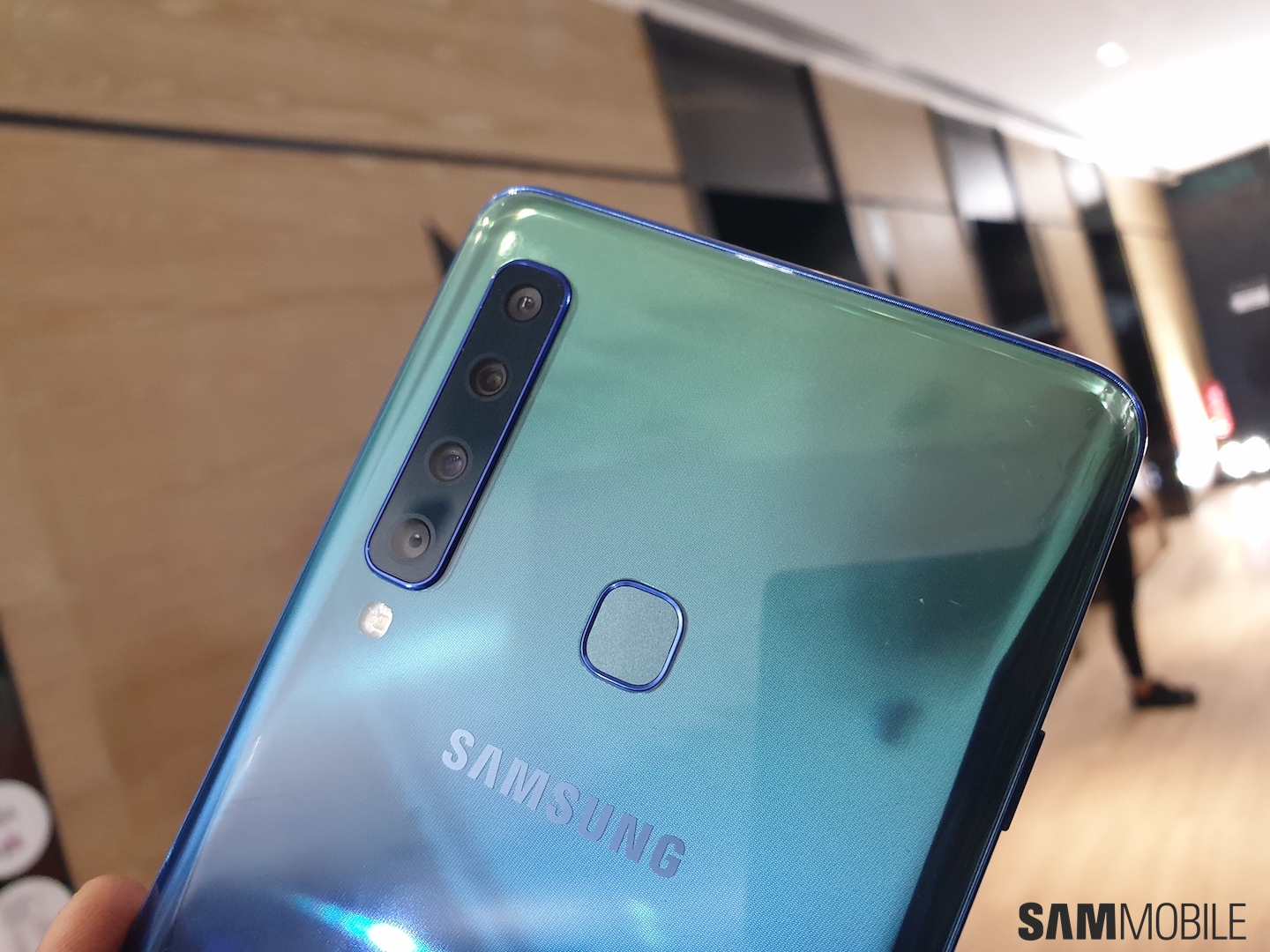 That being said, the Galaxy A9 does look and feel like a premium device. Samsung has been gunning for this look with its Galaxy A series for the past couple of years. The Galaxy A9 sticks to the script perfectly. It feels nice and light in the hand with the 3D curved glass allowing it to rest comfortably.

The volume and power buttons are on the right side while the Bixby key is placed high up on the left side. Those who don’t particularly like Samsung’s assistant will appreciate this change. It’s high up enough to prevent accidental presses. With the Galaxy A9 featuring Bixby Voice (a feature missing on the A7), this minor change will make a world of difference.

Let’s talk about the specs real quick because they’re nothing to write home about. The Galaxy A9 has a 6.3-inch Full HD+ 2220×1080 pixel resolution display. It will be available in 6/8GB RAM variants, both with 128GB internal storage. It supports microSD cards up to 500GB for a total of 600GB storage in your pocket. It’s powered by Qualcomm’s Snapdragon 660 processor and there’s a 3,800mAh battery keeping the lights on.

Quad rear camera is the star of the show 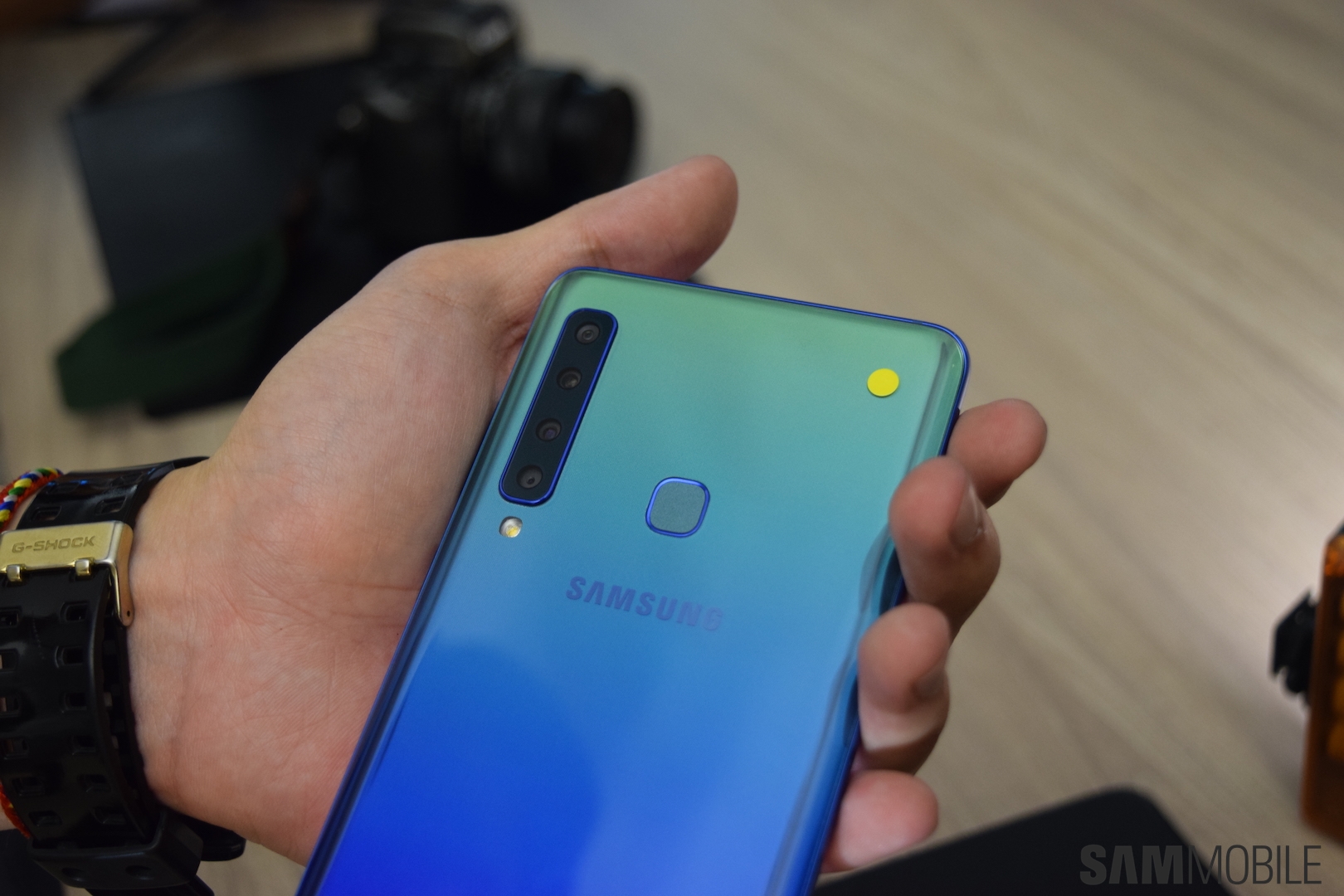 The quad camera is the biggest selling point of this device. The Galaxy A9 has 8-megapixel Ultra-Wide 120-degree FOV, 10-megapixel telephoto, 5-megapixel depth and 24-megapixel primary sensors. It has been developed with the Instagram generation in mind, which is why the camera was the only thing that Samsung really talked about during the event.

Just because a device has four cameras doesn’t mean it’s better than anything else on the market. What this system merely does is allow for a variety of use cases. The primary lens is a standard 24-megapixel f1.7 aperture camera. Then there’s the 10-megapixel telephoto lens which allows for 2x optical zoom. This is what sets the Galaxy A9 apart from the Galaxy A7. The 8-megapixel 120-degree Ultra-Wide and 5-megapixel Depth lens for Live Focus photos are already present on the Galaxy A7. There’s a 24-megapixel front camera for selfies.

Our initial impressions of this setup are that it works as advertised. We have already raved about the Ultra-Wide angle lens in our Galaxy A7 review, and you’ll reap the same benefits on the Galaxy A9. The telephoto lens allows you to get closer to a subject without compromising on the image quality and that’s a welcome feature to have. The camera software lets you switch between the primary, zoom and wide-angle cameras from the auto mode. There’s a small UI overlay in the viewfinder which lets you to do this with a single tap. Samsung’s Scene Optimizer is present on this device as well. It uses AI to recognize up to 19 different scenes and adjusts settings accordingly. 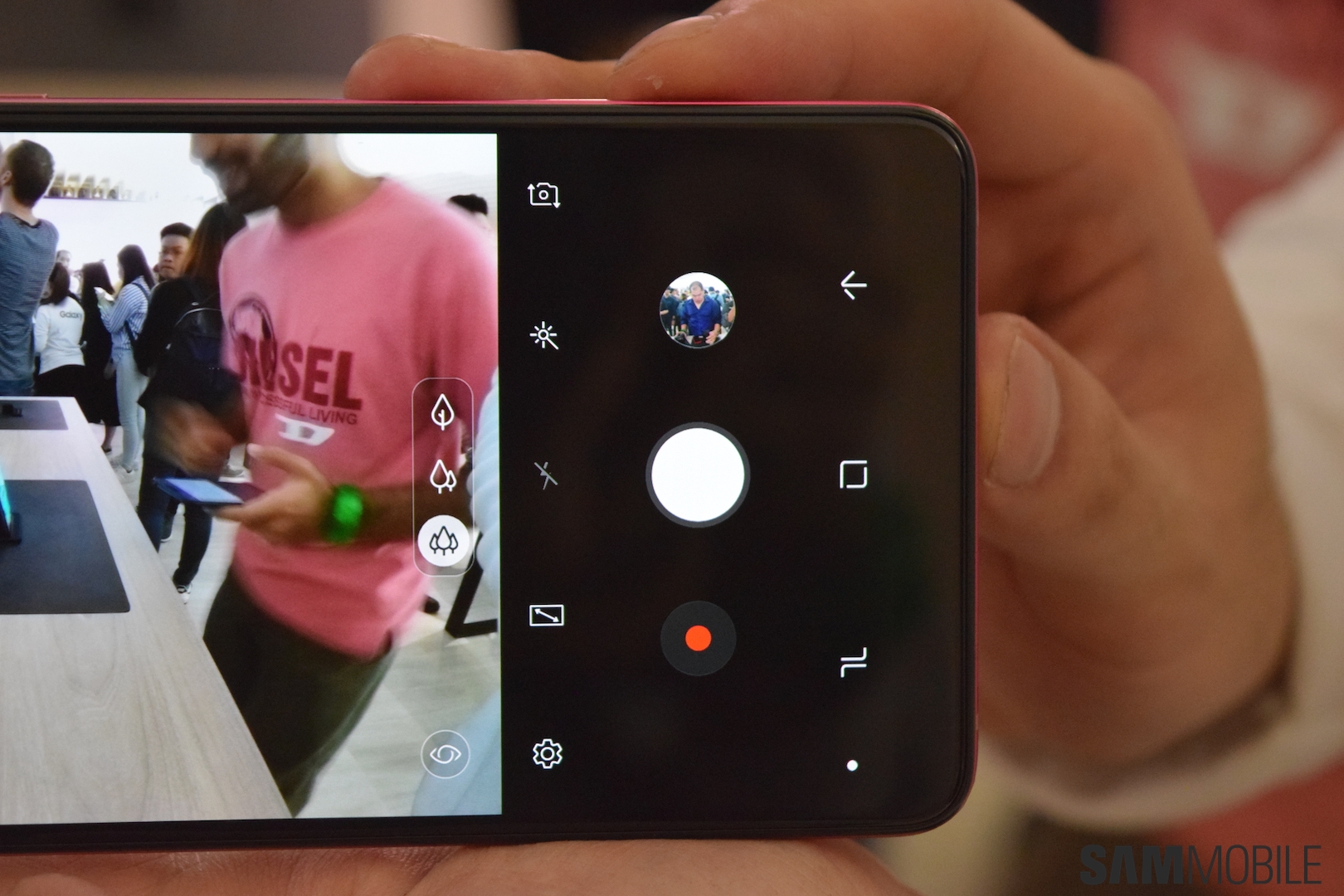 One has to dock points for some elements that are missing from the Galaxy A9. There’s no wireless charging, water resistance or even MST Samsung Pay. Samsung Pay only works over NFC, which feels like a step backward (the A8 Star already suffers from this limitation). The device will ship with Android 8.0 Oreo. Asking for Pie would have been stretching it a bit, but one would have reasonably expected there to be Android 8.1.

Samsung has only flirted with gradient colors before and it’s embracing them with the Galaxy A9. Caviar Black is your boring old black color. The real stars are the Lemonade Blue and Bubblegum Pink gradient colors. They’re eye-catching and the light plays off of them beautifully. But they are also fingerprint magnets, so you’ll be constantly wiping them to ensure that they look pristine. Full marks to Samsung for these colors and the design. 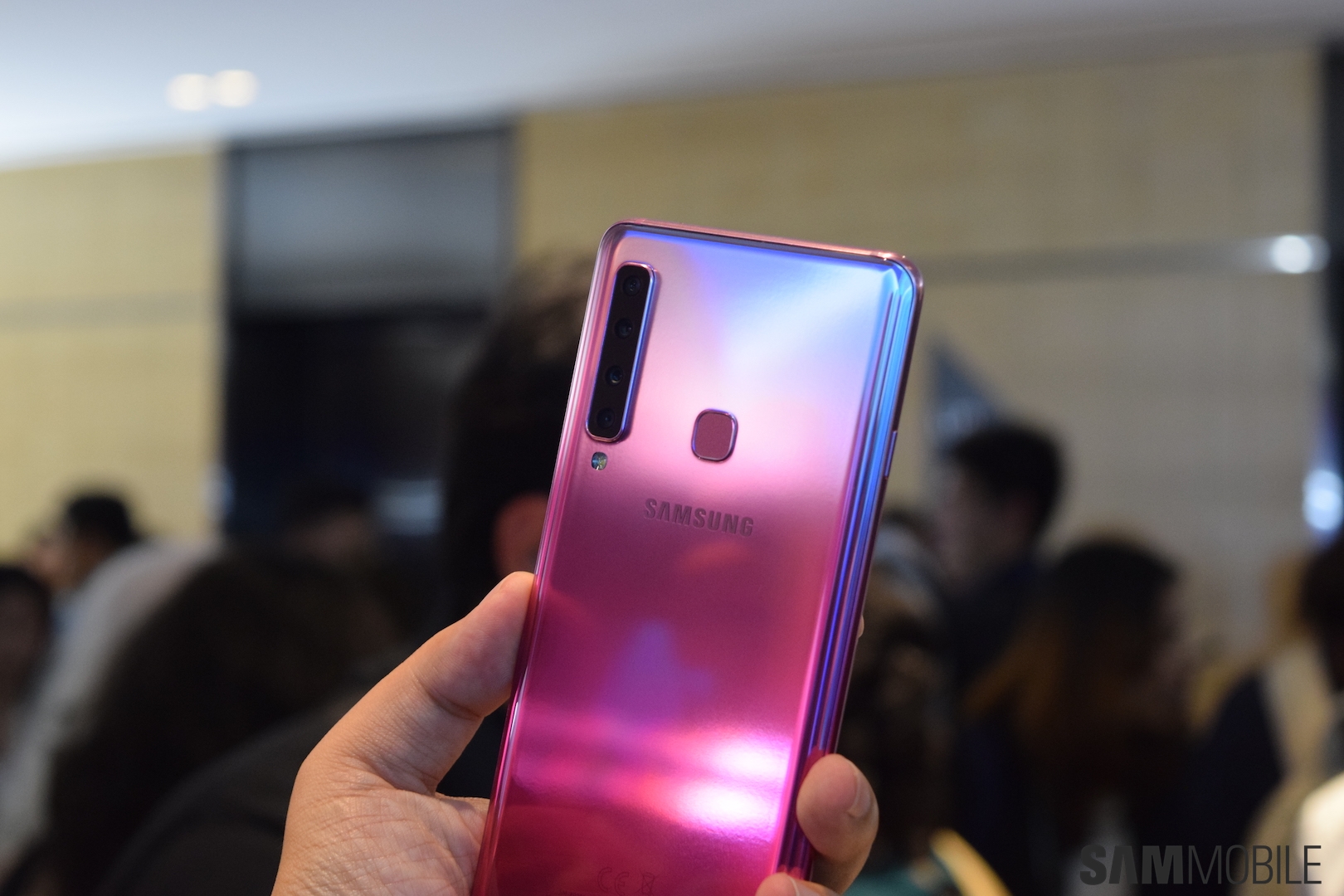 The company hasn’t confirmed precise availability details for the Galaxy A9. The handset will be out later next month. We’ve already told you that the base model with 6GB of RAM is going to cost €599 in Europe. The company’s local divisions will confirm pricing and availability in due course.

Stay tuned for our full review of the Galaxy A9 in the coming weeks. We’ll put the camera through its paces and let you know if it’s worth spending money on. Based on this Galaxy A9 hands on, what do you make of the world’s first quad camera smartphone so far? Let us know in the comments below.