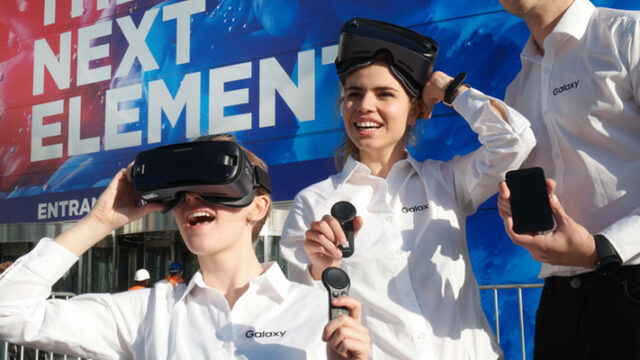 The Gear VR has helped Samsung make significant inroads into the virtual reality market but the headset itself leaves a lot to be desired. The relatively low screen resolution leaves users wanting more even if they’re using a flagship handset like the Galaxy S9 with the headset. This is due to a phenomenon called the “Screen Door Effect (SDE).”

Simply put, the Screen Door Effect is the fine black grid of lines that you will sometimes notice when immersed in a VR experience. That’s actually the space between each individual pixel and it’s called SDR because it basically feels like you’re looking at the VR experience through a mesh screen door.

Samsung appears to be working on a solution for this. The company has filed a trademark application for the “Anti SDE AMOLED” moniker before the European Union Intellectual Property Office. As the name suggests, this brand name will be used for an AMOLED screen that will not suffer from the Screen Door Effect in virtual reality.

No technical details of the Anti SDE AMOLED screen itself have surfaced, so it’s difficult to ascertain at this point in time whether this will be an AMOLED display with a higher resolution or with a different subpixel layout. The company did show off its most pixel-dense VR display yet at the SID 2018 a month ago, it was a 2.43-inch panel with a resolution of 3840×2160 pixels, that’s 1200 PPI.

It’s also within the realm of possibility that the Anti SDE AMOLED may just be the moniker for this high-resolution virtual reality screen, but it’s just speculation at this point in time. Samsung is expected to jump to 4K UHD resolution AMOLED screens at some point in the future but it’s not going to happen with the Galaxy Note 9. It would be best not to hold out hope that whatever this trademark is hinting at is going to be announced on August 9 alongside the Galaxy Note 9 in New York City.