If a new rumor posted on Weibo is anything to go by, it would appear that Samsung is preparing to take the wraps off the long-rumored Galaxy C5 Pro and Galaxy C7 Pro in December. We first found out about the handsets a couple of months ago when we exclusively reported that they were in the pipeline with the model numbers SM-C5010 and SM-C7010, respectively.

Unfortunately, we had little to go on with regards to specifications. However, this latest rumor suggests that the Galaxy C5 Pro will be powered by a Snapdragon 625 processor, while the Galaxy C7 Pro — which entered India for testing last month — is expected to pack a Snapdragon 626 chipset. Recent speculation also points towards both units packing at least 3GB of RAM, though that’s unconfirmed. 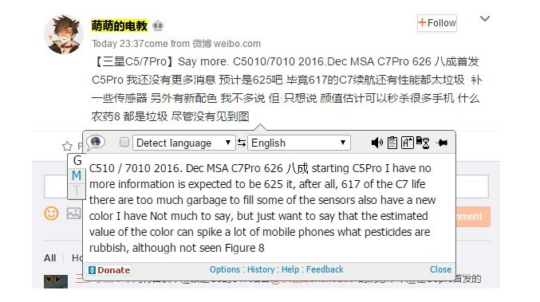 Samsung is now rolling out the Galaxy C7 Pro Oreo update in India. The firmware update also includes the latest security patch for the month of November 2018. Samsung last released an update for this device five months ago when it was bumped up to the May 2018 patch. The much-awaited Oreo update is now […]

[Update: Galaxy A series, too] Samsung Galaxy C7 Pro gets May security patch in India

It’s raining security patches all around. Samsung has just started pushing the latest security patch for the Galaxy C7 Pro in India, bringing the security level to May 1. This follows the update for Samsung’s newest flagships, and also for existing flagships like the Galaxy S6 and S6 edge. For details on what the May […]

The Galaxy C7 Pro, like the Galaxy C9 Pro, is hard to get hold of unless you live in China or India, as Samsung isn’t making its Galaxy C series of mid-range phones available globally. It probably never will, as the Galaxy A lineup is what the Korean giant is using to woo consumers outside […]

Over the last few weeks, I’ve used two of Samsung’s mid-range phones as my primary device. The Galaxy A7 (2017) came first, followed by the recently launched Galaxy C7 Pro. In terms of overall specs, both are packed with features that we wouldn’t have expected on Samsung devices in the same price range only a […]

Just two days after the device went on sale in the country, the Galaxy C7 Pro is getting its first software update in India. The update is a small one (35 MB) that brings the security updates for the month of March, putting the security level at April 1. The C7 Pro is among the first […]