Finally, a bit of good news for Samsung. St. Petersburg Fire Rescue have today announced that they were unable to determine whether a faulty Galaxy Note 7 left plugged into the cigarette lighter socket of a 2005 Jeep Grand Cherokee was the exact cause of the fire that destroyed the vehicle.

The owner of the Jeep, Nathan Dornacher, blamed the handset for sparking the fire right from the word go. However, St. Petersburg Fire Rescue has listed “undetermined” as the official classification for the fire that occurred at 3257 58th Street N on Monday, September 5.

“Due to the destructive nature of the fire, and multiple possibilities that could not be eliminated as to the ignition source, this classification was determined most appropriate,” writes a fire investigator on behalf St. Petersburg Fire Rescue in his official report on the matter.

While it’s still possible that the Galaxy Note 7 was to blame for the car catching fire, the investigators were unable to discover a clear link. It’s not uncommon for car batteries to swell in hot weather, though, so I believe that a minor fire caused by the handset may have ignited the battery, leading to the full-scale explosion we saw in the images. 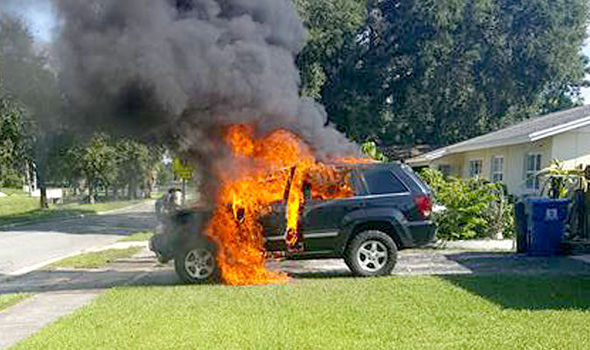