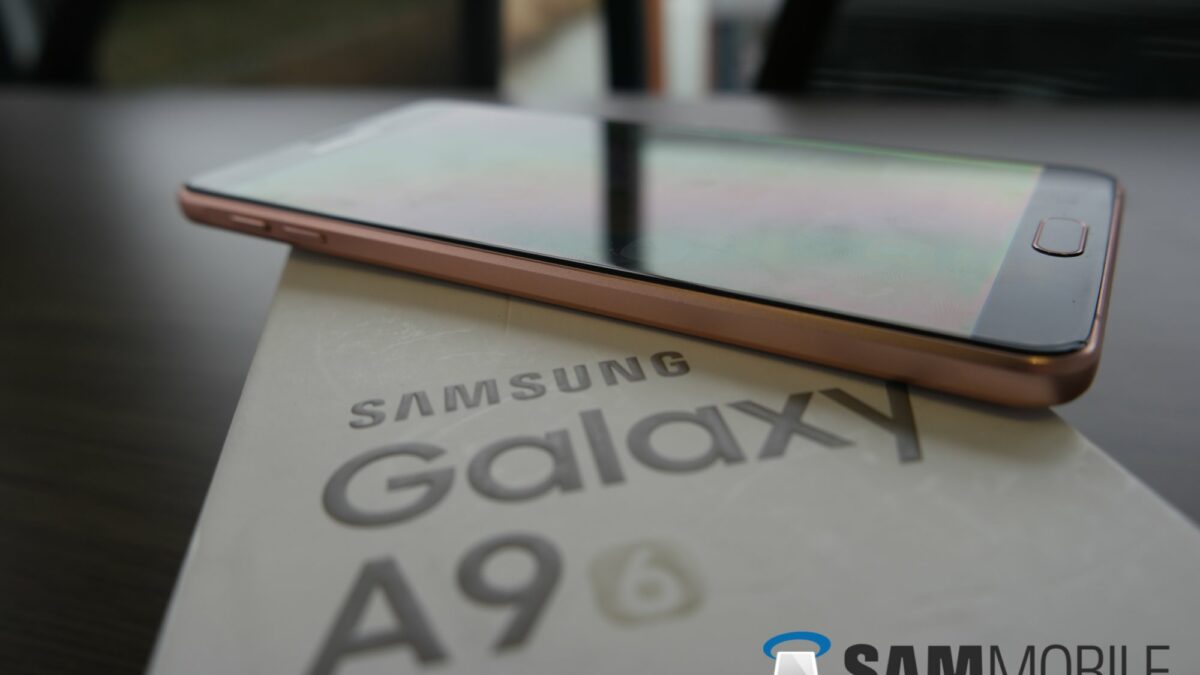 The Galaxy A9 is something of an outcast in Samsung’s new Galaxy A (2016) lineup. The screen is considerably bigger than the new Galaxy A3, Galaxy A5 and Galaxy A7, the battery is monstrous, and the A9 is only available in the Chinese market. The A9 is as feature-packed as the rest of the new A series devices, and the 4,000 mAh battery makes it stand out among the crowd. Not the entire crowd, mind you – the Chinese market is full of large smartphones with even larger batteries inside them, and the premium design and Samsung’s brand value is what will get the Galaxy A9 the attention it needs in the extremely crowded Chinese smartphone market.

Note: This review is based on our experience with the dual SIM Chinese model of the Galaxy A9 (SM-A9000), flashed with the latest Hong Kong firmware in order to use Google Play and other Google services out of the box.

Well, Samsung has outdone itself this time around, moving from an all metal build to one with glass and metal similar to the Galaxy S6. This gives the phone a very premium feel. It has a beautiful 2.5G glass that is slightly raised from the sides. It looks beautiful but I have the feeling it catches scuffs easily. The Galaxy A9 is a very big phone, yet it is easy to hold. This surprised me a lot – it’s because of the side bezels which are really slim and make the phone very narrow for a 6-inch device. Only thing that isn’t great is the phone’s weight. At 200 grams this thing is quite heavy, and thanks to that glass and metal it’s also rather slippery.

The phone I reviewed is the Pink Gold version, which I must say looks very cool. When you look at it from the front you will see the big black Gorilla Glass 4 front panel with the pink gold metal rim surrounding it, and the home button has a pink gold highlight as well. In my opinion this gives the phone a very sophisticated look.

Now, for the aesthetics, what are we working with here? Let us start with the front. We have the home button (with an integrated fingerprint sensor) and the overview (recent apps) and back keys on either side. On top we have the speaker grill, with the sensors on its left and a front camera on the right. A notification LED is missing here, which once again fails to surprise as Samsung seems to want to keep those exclusive to its high-end offerings. The right side of the phone houses the power button and a slot for the SIM card and microSD card. The left side houses the volume rockers; both the power and volume rockers are crafted beautifully within the metal rim.

This year the loudspeaker is at the bottom instead of at the back, a welcome move that is inspired by Samsung’s 2015 flagships. Next to the speaker we find the microUSB port, the headphone jack, and a microphone. On the top there is a secondary microphone and a second SIM slot. The back of the phone has the camera, which still protrudes a little. An LED flash is present, and the back is made of Gorilla Glass 4 as well.

Because of the weight and the slippery glass, the Galaxy A9 can be very slippery. I’m used to holding my phone in a single hand, resting it on the little finger (the pinky, as they call it). After a while the phone becomes too heavy for my poor finger and I need to readjust my grip, which is always an invitation to dropping the phone. This phone is made solely for two-handed operation, which makes the device considerably more pleasant to hold, and typing is better done through swiping.

The Galaxy A9 uses a 6-inch Full HD Super AMOLED display. The pixel density is 367 PPI and the screen rocks Samsung’s infamous Diamond PenTile pixel layout. The screen is huge and very nice to use when you’re viewing videos or playing games.

As expected from an AMOLED panel, the colors on the display are very vibrant and pop right out when you take the phone out of the box. This is because the screen is set to Adaptive display mode by default, which makes the colors oversaturated and makes them look unreal in order to show the insane colors the screen is capable of producing. Contrast levels are insane as well, with very deep blacks. Viewing angles are on par with all of Samsung’s Super AMOLED displays, so there’s nothing to complain here. At automatic brightness this screen can get awesomely bright, and you can take a look at the A9’s screen analysis here.

The Galaxy A9 comes with a 13-megapixel camera on its back and an 8-megapixel camera on the front. On full resolution both shoot in the 4:3 aspect ratio. I’ll tell you right off the bat: these cameras could have been better. It’s clear Samsung leaves the really good imaging experience to its flagships.

In daylight, it shoots decent pictures with a fair amount of detail and color reproduction and little to no noise. When you’re indoors, it’s a totally different ballgame. The pictures lack detail and sharpness; when the lighting conditions get worse, so does the picture quality. The camera lacks the proper color reproduction. For example, the light of my lamps turn up more yellow than they really are. The autofocus is a problem too – it doesn’t focus quickly enough so you miss your shot most of the time.

The front camera is an 8-megapixel unit and it shoots very acceptable pictures. It’s certainly much better than the Galaxy A8, which needed a lot of light to shoot decent pictures. The A9 is better, yet the colors are still a bit washed out and the sharpness is lacking a little bit as well. 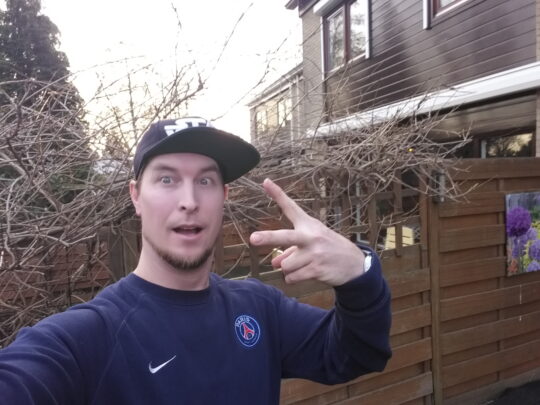 The overall video recording experience is okay but not good enough since optical image stabilization is missing here.

The Galaxy A9 runs Android 5.1.1 Lollipop (not Marshmallow, which is to be expected) out of the box, and the TouchWiz UX is the same as the one found on all the phones launched after the Galaxy S6. This means you have themes support, Smart Manager is present, and all the optimization Samsung introduced with the Galaxy S6 and Galaxy S6 edge. Everything is almost identical to the S6 family, though a few features are missing, such as Direct Call or wallpaper motion effect. It you want a full rundown of the software, check out our review of the Galaxy S6 and Galaxy S6 edge.

The phone is running Qualcomm’s Snapdragon 652 chipset with eight processing cores: four Cortex-A72 cores and four Cortex-A53 cores running up to 1.8GHz and paired with the Adreno 510 GPU. There is 3GB of RAM, and our unit had 32GB of internal storage and support for a 128GB microSD card.

The A9 feels really fast and smooth most of the time, yet sometimes the Snapdragon 652 struggles to keep up. Performance isn’t consistent, and you’ll notice lock ups once in awhile. This mainly happens when you switch between apps really quickly. Multitasking is improved over the Galaxy S6 lineup – apps don’t reload that often. I could manage to go back to six apps without any of them reloading.

As for games, the A9 handled every title very well, though it did get a little hot after extended periods of play (we tested games like Ridge Racer Slipstream, FIFA 16 and Real Racing 3, all of which are high-end games.)

This year the A series has the same speaker placement as the S6 – at the bottom. It’s still not the ideal spot for a speaker – you often place your finger on the speaker and in turn block the sound output. The sound through the speaker is loud but feels a little tinny. On headphones the sound is great, with good bass, nice pitchy highs, and volume that is louder than I’m used to from Samsung phones. Samsung’s SoundAlive feature is present here, so you can set the sound quality to your liking through various controls and presets.

Where the A8’s call quality was sometimes shallow, the A9 performed much better. The cell reception is great, though it is worth mentioning that my device is running Hong Kong firmware and not all the bands are supported here in the Netherlands (I’m looking for a way around this). This is something that could affect the call reception; maybe the 4G coverage can be better and that could affect battery life as well.

The battery of the A9 is a 4,000 mAh unit, which is a lot. The phone just doesn’t seem to die. There were days when I didn’t need to plug in my battery at night and I could manage two full days on a charge. This was all done with moderate to heavy usage on Wi-Fi and for extended periods on 4G data. The phone manages to get a screen time of 6 hours quite often, and sometimes more when you’re a bit frugal with usage. The new A series seems very well optimized in terms of battery life, even with the phone running on networks it wasn’t originally designed for.

With the use of Power Saving Mode, you can extend the battery life even more. This reduces CPU performance, screen brightness and frame rate, and turns off the touch key lights. Ultra Power Saving Mode is even better, as it sets the screen to black and white and turns off mobile data when the screen is off. Where power saving mode would give me 26 hours of extended usage time (theoretical), the Ultra version would increase it to 56 hours. .

The Galaxy A9 is a real powerhouse in terms of battery endurance. There wasn’t a single day I was worried about battery life. Plus, with fast charging support, the battery also charges up really quickly (approximately from 0 to 100 in 120 minutes) .

The Galaxy A9 is the first of the new Galaxy A (2016) series that I managed to play around with, and it did not disappoint. I thought the size of this phone would give me headaches, yet I got used to its pretty quick. I can see people’s affection for such large screens, as this 6-inch display is fantastic, especially when you use it like I do. I watched numerous TV shows on it and a lot of YouTube; yes, the screen is only Full HD but that isn’t something you will notice.

Combine this screen with a 4,000 mAh battery, and you’re all set, as the battery can last forever. Samsung hasn’t gotten any real competition in this segment of the market of 6-inch smartphones. The specs are great, battery life is stellar, and you get the feel of a premium device with the feature-packed experience of Samsung’s software. For a price of around $485, the Galaxy A9 is a great mid-range device, and we really hope Samsung brings the device to other markets outside China.