Samsung-owned race track being modified to test its autonomous cars 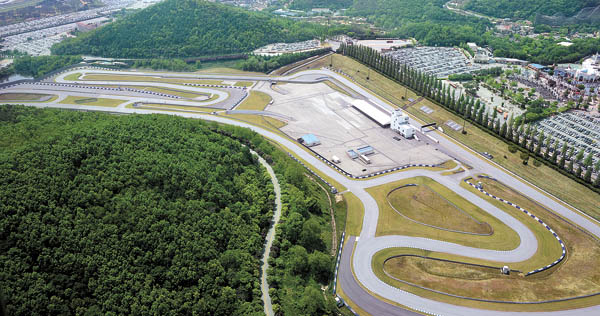 Last month Samsung Group announced that it’s looking to discover new avenues for growth and that it’s setting up a dedicated team that’s going to be tasked with growing its automotive-related business and focusing particularly on autonomous or self-driving technologies which are likely going to be a big part of the future. It was also reported recently that Samsung and BMW are working together to create the virtual brains that will power autonomous cars of the future, all this is enough to realize that the company wants to be a player in this arena, and what it’s doing now only goes to show that Samsung is serious about self-driving cars.

Samsung C&T owns Everland, an amusement park in Yongin, Gyeonggi, South Korea. The Speedway motor race track at Everland is being modified so that it can be used as a testing ground for Samsung’s autonomous vehicles. Speedway was the first paved race track in South Korea and it was opened in 1995, it was often visited by Samsung Chairman Lee Kun-hee who liked going around in sports cars. Actual road conditions and simulated urban environments will be added to the Speedway so that the company is able to test this technology effectively. “Samsung already owns Speedway, so we just need to add some features to the existing racecourse,” says a Samsung representative, adding that this is much easier than actually finding the space to built an entirely new track for the purpose of testing self-driving cars.

Samsung has addressed recent rumors which suggested that the company might enter the automotive business as a player. It currently makes technological components for cars that are used by many manufacturers. The rumors suggested that Samsung would actually get into the business of making cars by acquiring a manufacturer. The company has denied it, saying […]

Samsung gets permit to test self-driving cars in California

Samsung is interested in the self-driving car industry and over the past couple of years, we’ve seen the company intensify its efforts to establish a footing in this industry. The company modified a race track that it owns in South Korea to test its autonomous car. It will now be able to do that on […]

Samsung has made no secret of the fact that it wants to play a bigger role in the automotive market, particularly one where smart and autonomous cars reign supreme. If you had any doubts about its intention the company’s recent acquisition of Harman International should put them to rest. Samsung has now joined a consortium […]

Six months after creating a separate team for making automotive parts, Samsung has created a task force to develop chips for self-driving cars. The new group is said to have experts from the company’s chip division that designs processors and image sensors for cameras and TVs. Samsung has made a big push towards connected appliances and connected cars […]