We have been hearing a lot about the Galaxy A9 in recent weeks, and Samsung has now revealed some interesting details on the upcoming handset. An image posted on Samsung China’s official Weibo account shows  an official advertisement of the Galaxy A9, the Galaxy A5 2016 and the Galaxy A7 2016, along with a few specifications.

The Galaxy A9 will have a 6-inch display, something we already knew from an earlier leak, and it looks like it will have a giant battery. A 4,000 mAh unit to be exact – coupled with the Full HD display resolution and the Doze feature on Android Marshmallow (which the device will probably get as an update, if it doesn’t come with it preloaded out of the box), we would expect the Galaxy A9 to be able to last really long.

That would be in keeping with the best feature of the Galaxy A8: epic battery life. Also interesting is the fact that an 8-megapixel front camera is listed, which would be a first for a smartphone from the Korean giant. Oddly, there seems to be a 13-megapixel camera on the back; the Galaxy A8 has a 16-megapixel camera, but given its mediocre performance, we guess the downgrade on the A9 won’t really matter in the real world.

There’s still no word on when the Galaxy A9 will go official. It will probably be after the recently announced Galaxy A trio goes on sale, and we are likely to see more details on the handset crop up in the weeks leading up to an official launch.

Update: Well, it seems a full infographic detailing the Galaxy A9 has also hit the web. The Galaxy A9 will feature the Snapdragon 620 CPU clocked at 1.8GHz, 3GB of RAM, 32GB of internal storage, a fingerprint scanner (with Samsung Pay support), and Android 5.1.1 (yep, users will have to wait for Android 6.0). An official announcement will supposedly take place later this month. 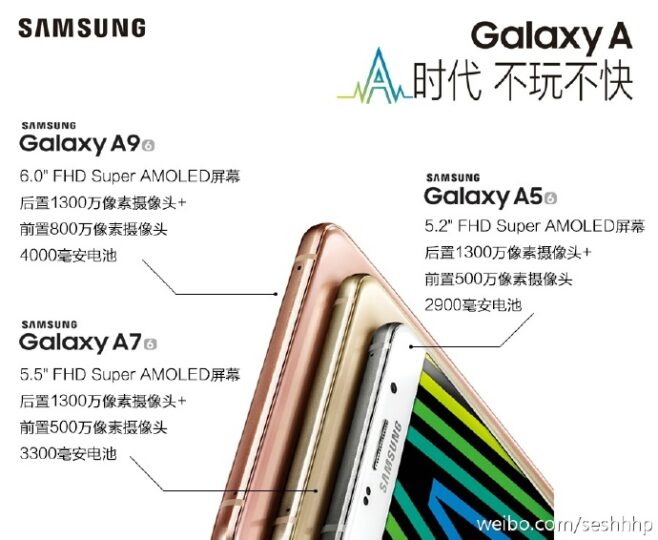