Samsung’s been pretty active in posting teasers that concede bit by bit the Galaxy S6. The latest from this series happens to be an Instagram post from the company, and one which we think gives away the fact that the Galaxy S6 will have a metal body.

Samsung has drawn a lot of flak from its consumers for not having metal bodies on its phones, particularly the high-end/flagship ones. From the Instagram post we’re talking about, it appears as though the company has, for a change, decided to make a full-metal bodied flagship. Samsung also put up a video teaser more recently, confirming the March 1st launch that we’ve always speculated.

While there’s been a lot of talk and interest around the metal build of the phone, something that enthusiasts have also been drooling upon is the possibility of an Edge-flavored Galaxy S6. Not sure if we’re getting ahead of ourselves as we say this, but the video teaser does look like one for the Galaxy S6 Edge… don’t you think?

Also if you lend an ear to the narration that plays through the entirety of the teaser, a couple of lines really catch your attention. “Metals will flow” and “borders will disappear” particularly hint at a flagship with a metal body, and a curved screen. This might be a little far-fetched, but the teaser also mentions that “new colors will be lit” which may just be a cheeky hint at a new type of an AMOLED screen that the Galaxy S6 will use.

With just over a week to go before March the 1st, we can’t wait to see how the Unpacked event pans out… can you? Take a look at the video teaser below, and the Instagram photo after that. 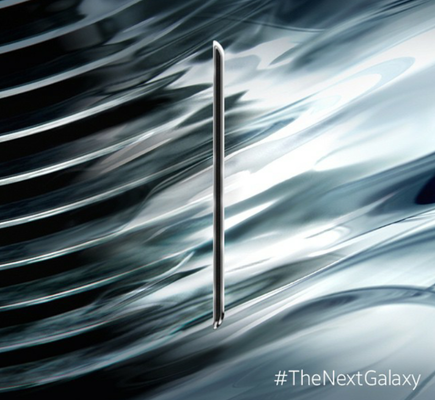