The specs for one of Samsung’s upcoming Pro tablets, the 10.1-inch Galaxy Tab Pro (SM-T520) have been leaked by the AnTuTu benchmark team, just a few days after the slate made a visit to the FCC. According to the benchmark, the Tab Pro 10.1 will feature a 2,560×1,600 display, 1.9GHz Exynos 5420 octa-core processor (maybe with true octa-core processing after a software update), 2GB of RAM, 32GB of internal storage, 8-megapixel rear camera, and Android 4.4.2 KitKat.

The specs are rather high-end and justify the Pro tag in the tablet’s name, and are a stark departure from the middling specs on Samsung’s current Galaxy Tab series, which means we’re also looking at a much higher price tag. The Galaxy Tab Pro 10.1 is expected to launch sometime in February, and we’re keeping our fingers crossed that it turns out to be one the AMOLED tablets that the Korean manufacturer is preparing to bring to market this year. 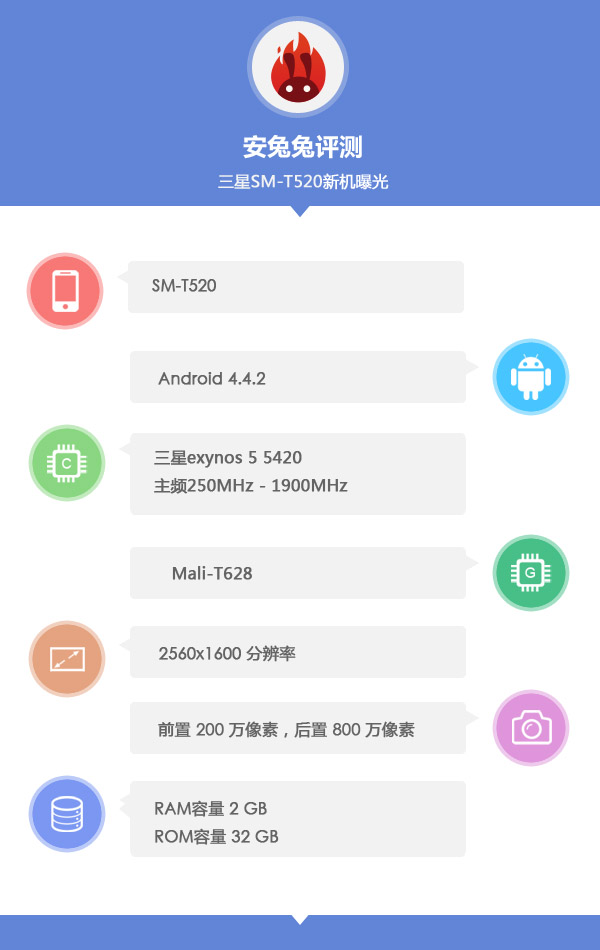 Samsung knows you haven’t forgotten about the Tab S, considering it has still been heavily running TV an …

Samsung is the largest handset manufacturer in the world, but it is behind Apple in the tablet segment. Apple …

Samsung is all set to launch the Galaxy Note Pro 12.2 along with the Galaxy Tab Pro series in Canada. The dev …

Along with the Galaxy NotePRO 12.2, Samsung has officially announced the Galaxy TabPRO 12.2 at its CES press c …

Samsung has announced the third member of its TabPRO series of tablets, the Galaxy TabPRO 8.4. With an 8.4-inc …