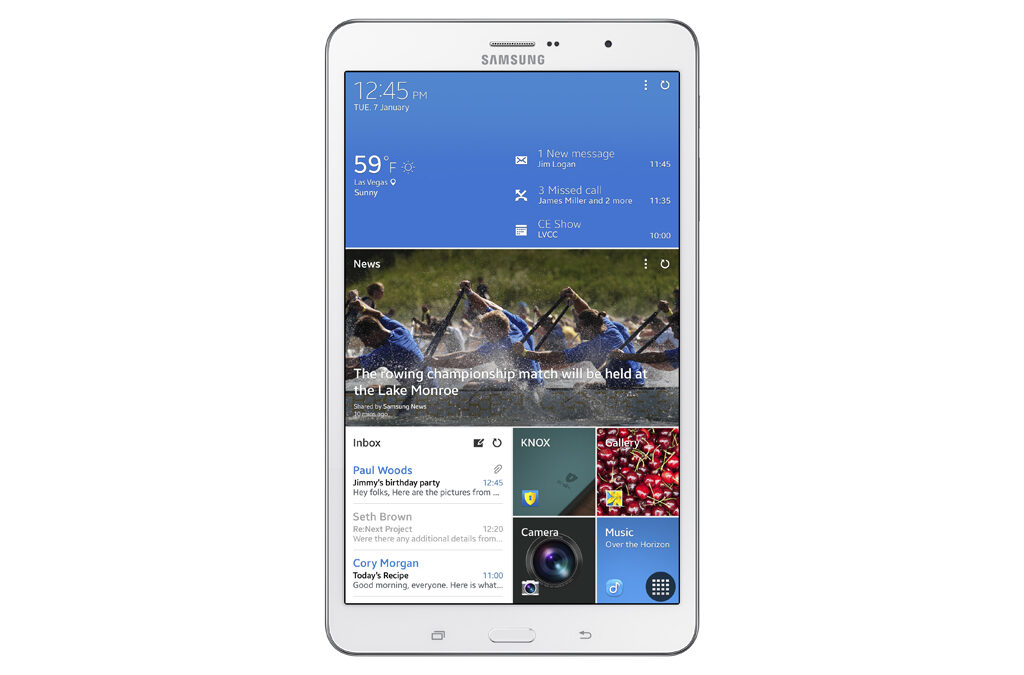 Samsung has announced the third member of its TabPRO series of tablets, the Galaxy TabPRO 8.4. With an 8.4-inch screen, it’s the smallest member of the company’s new premium tablet line, though the smaller dimensions don’t mean you have to settle for middling specs. The Galaxy TabPRO 8.4 retains the 2,560×1,600 resolution screen of its 12.2 and 10.1-inch siblings, giving it one of the sharpest screens among Android tablets out there.

The Galaxy TabPRO 8.4 is powered by a Snapdragon 800 processor with four cores clocked at 2.3GHz, and other specs of the slate include 2 GB of RAM, an 8-megapixel rear camera, 2-megapixel front-facing camera, 16/32 GB of internal storage expandable via microSD slot, and a 4,800 mAh battery. Like the other Pro tablets, the TabPRO 8.4 runs on Android 4.4 KitKat out of the box, with Samsung’s usual TouchWiz skin and features on top.

If you’ve been keeping up with the news for some time, you’re aware of Microsoft’s lawsuit against Korean manufacturer Samsung. In the end, though, both sides reached an amicable agreement that benefited them both – although the means of resolution has yet to be disclosed by either party involved. This year’s Samsung smartphone and tablet […]

UK retailers are offering a nice little deal on the Galaxy TabPRo 8.4, the smallest member of Samsung’s premium Galaxy TabPRO tablet lineup (and also the one with the sharpest screen). Retailers such as John Lewis and Currys PCWorld are giving away £100 in Google Play credit, which can be redeemed from Samsung Gifts within 28 […]

Samsung has never been shy about making fun of the competition, and in a new ad for its new Galaxy PRO tablets, the Korean manufacturer has decided to taunt not just Apple, but Microsoft’s Surface and Amazon’s Kindle as well. Whether it’s an iPad owner getting embarrassed over the fact that his tablet can’t do […]

We recently leaked a few details of Samsung’s upcoming AMOLED tablet, and it looks like Samsung Hungary might have inadvertently confirmed its existence on its Facebook page, giving us the first official word on the device. In response to a user’s inquiry asking when the Galaxy TabPRO 8.4 LTE will be launched in the country, […]