We have just got confirmation on Samsung’s upcoming GALAXY Note Pro 12.2 tablet’s specifications and Antutu benchmark details. We have also received information that Samsung is changing its usual tablet UI to something more unique. For now, we don’t know what it will exactly look like but we will let you guys know as soon as we get something more. Samsung has been trying to make a mark on the tablet market for some time now, and it finally looks like it may be able to do that in 2014. Many of Samsung’s upcoming tablets will be unveiled at Mobile World Congress in Barcelona, including the Galaxy Note Pro 12.2.

The LTE-equipped Galaxy Note Pro 12.2 (SM-P905) features a 12.2-inch display with a massive resolution of 2560×1600 (WQXGA) pixels and 16:10 aspect ratio, quad-core Qualcomm Snapdragon 800 SoC (8974-AA) clocked at 2.3GHz, Adreno 330 GPU with a clock speed of 450MHz, 3GB RAM, 8 Megapixel main camera sensor capable of shooting Full HD 1080p video and a 2.1 Megapixel front facing camera for selfies and video calls. The device will come pre-loaded with Android 4.4.2 KitKat and a new version of Samsung’s TouchWiz interface. We are not sure if the WiFi-only (SM-P900) variant will pack the same Snapdragon SoC or Samsung’s own Exynos SoC. 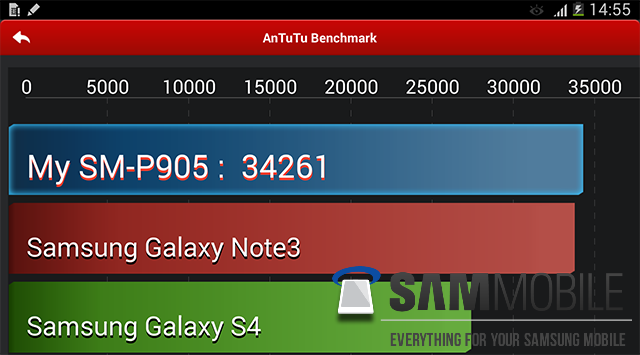 In Antutu benchmark, the tablet scored 34,261 points but keep in mind that the device is running experimental test software, and we have been told that the device can score up to 40,000 points in the same benchmark while using proper software.

Just a few days back AT&T released the much awaited Android 5.1.1 update for the Galaxy S6 and the Galaxy S6 edge, now it’s giving the same treatment to the Galaxy Note Pro 12.2 which has now received the aforementioned update. The tablet is being bumped up to Lollipop from KitKat so users will certainly […]

The Lollipop party continues for Samsung devices, with the Galaxy Note PRO 12.2 LTE the newest kid on the block to receive the confectionery update. Samsung’s largest Galaxy Note is being updated to Android 5.0.2 over in Switzerland as we write this, with the update carrying build number P905XXUABOD7. The update should include all the goodies […]

It seems there is no stopping Samsung. The company has been continuously pushing out Lollipop updates for various devices almost every other week, and it has now turned its focus to the Galaxy Note Pro 12.2. The LTE variant of the Note Pro 12.2 has started receiving the Lollipop update in Italy. The update is […]

Verizon is pushing out an update to the Galaxy Note PRO 12.2 to fix a few issues and make minor changes, while keeping the Android version at Android 4.4.2. The update brings a bug fix for the default Calendar app, improves stability for the Science and Technology sections of the Magazine UX, adds an option to […]