Samsung´s new Galaxy S4, the GT-I9506, already showed up last week, which is said to be powered by a Snapdragon 800 processor and is headed for markets outside Korea. Today this new model number has been confirmed again, thanks to a Bluetooth certification found for the device. Samsung is expected to announce this Snapdragon 800 Galaxy S4 before the IFA event in September, and like before, we advise you to wait for this variant before buying a new Galaxy S4, as it is guaranteed to be much faster than the current models. 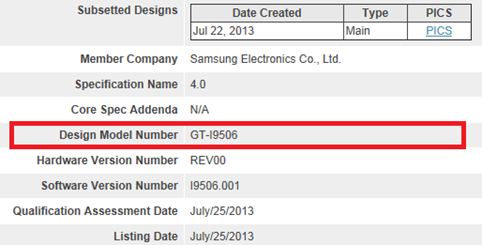