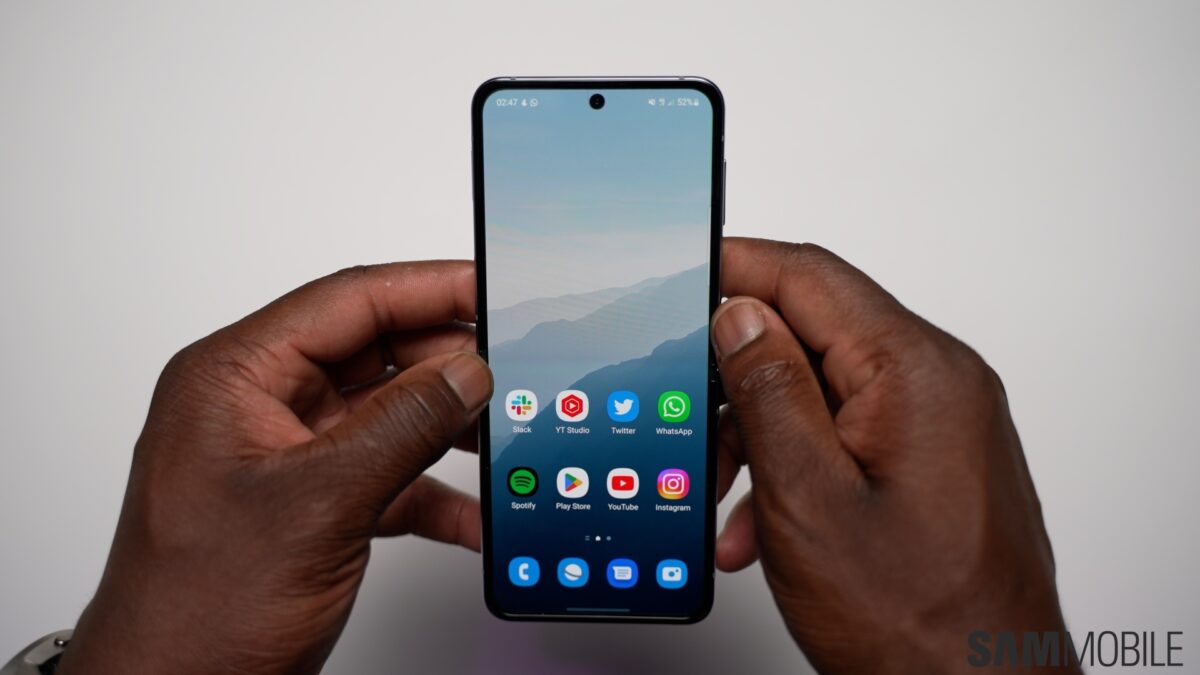 The Galaxy Z Flip 3 was one of the greatest devices that we’ve seen from Samsung in years. It had a great design, unique form factor, and flagship-level performance. Samsung offered it for $999, breaking the psychological barrier that prevented many from taking a chance on foldables. No wonder that the Galaxy Z Flip 3 quickly became Samsung’s best-selling foldable smartphone yet.

So it goes without saying that the Galaxy Z Flip 4 has big shoes to fill. Does it offer enough to make itself stand out compared to the predecessor? Did Samsung address the shortcomings of the Galaxy Z Flip 3? Will it enable Samsung to further tighten its grip on the foldable segment? You’ll find the answers to these questions in our Galaxy Z Flip 4 review. 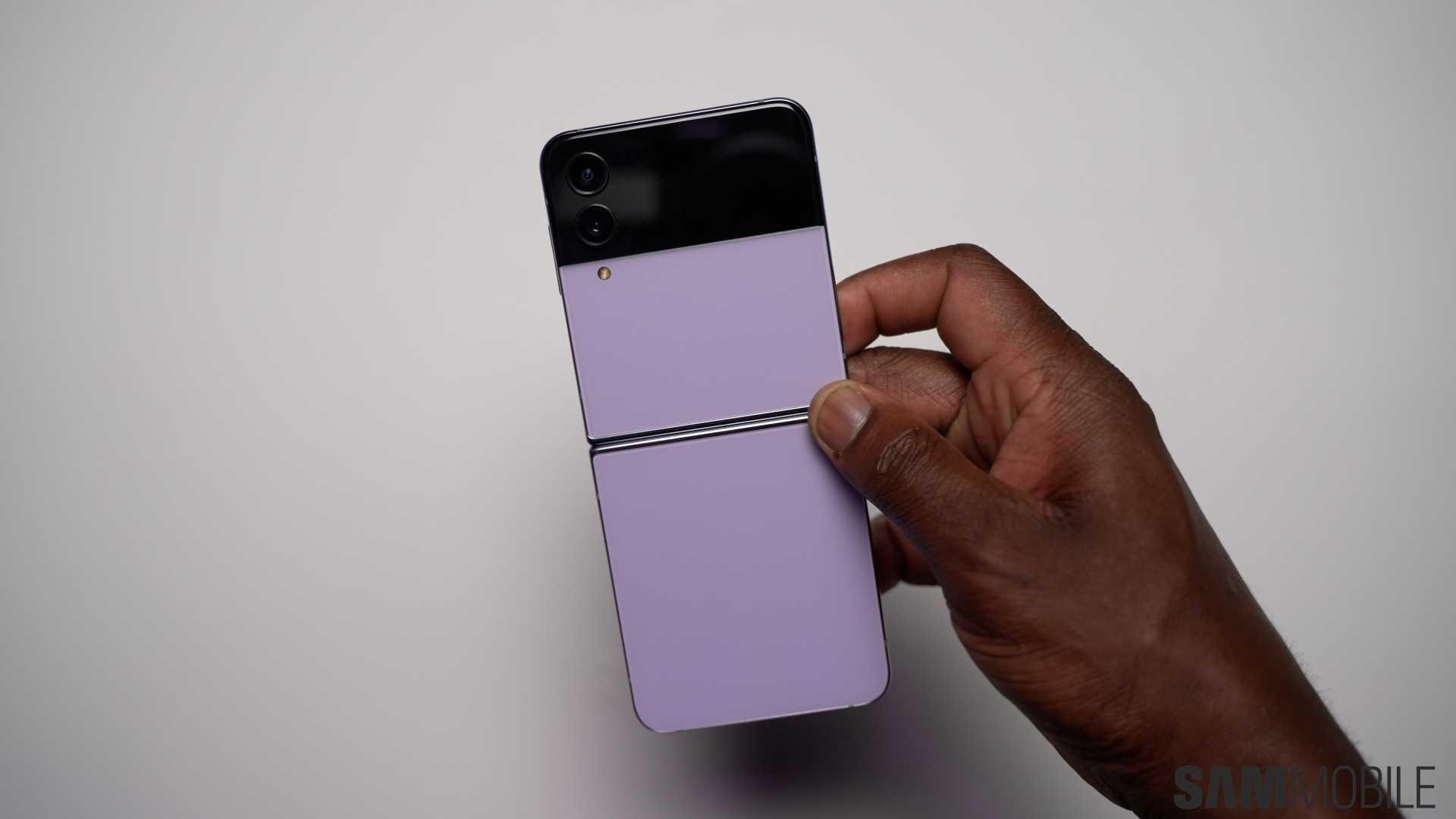 The Galaxy Z Flip 4 just gives us more of the same. It’s nearly identical to the Galaxy Z Flip 3 in terms of design. There are only a few subtle details that make it evident that this is the latest model. Samsung has gone for a matte finish this time which lends an air of sophistication to the device. The metal frame, made from Armor Aluminum, fuses seamlessly with the rear panel that’s covered with Gorilla Glass Victus+ for improved durability.

The highly polished frame stands out

Samsung has also reduced the size of the hinge. This was a crucial improvement as it enabled the company to increase the battery size. Last year’s model was the first water resistant Galaxy Z Flip. It’s great to see that the Galaxy Z Flip 4 retains the IPX8 rating.

The hinge is nice and sturdy. Opening and closing the phone is a joy. Flex Mode lets you open the display at various angles to take photos, record videos, and more. Unfolding it with a single hand is possible even though it feels a bit awkward. There’s still a gap between the two halves of the Galaxy Z Flip 4 and it will trap any loose items that you may have in your pocket or bag. They could be a danger to the foldable display, but Samsung has also improved the durability of the foldable panel.

By virtue of it being a clamshell foldable, the device is incredibly portable. You can chuck it into your pocket fairly easily. It’s just the right size if you prefer devices that don’t have a massive footprint. The design remains eyecatching and the selection of colors Samsung offers only add to its excellent design language. For those who prefer more customization, there’s the Galaxy Z Flip 4 Bespoke Edition. 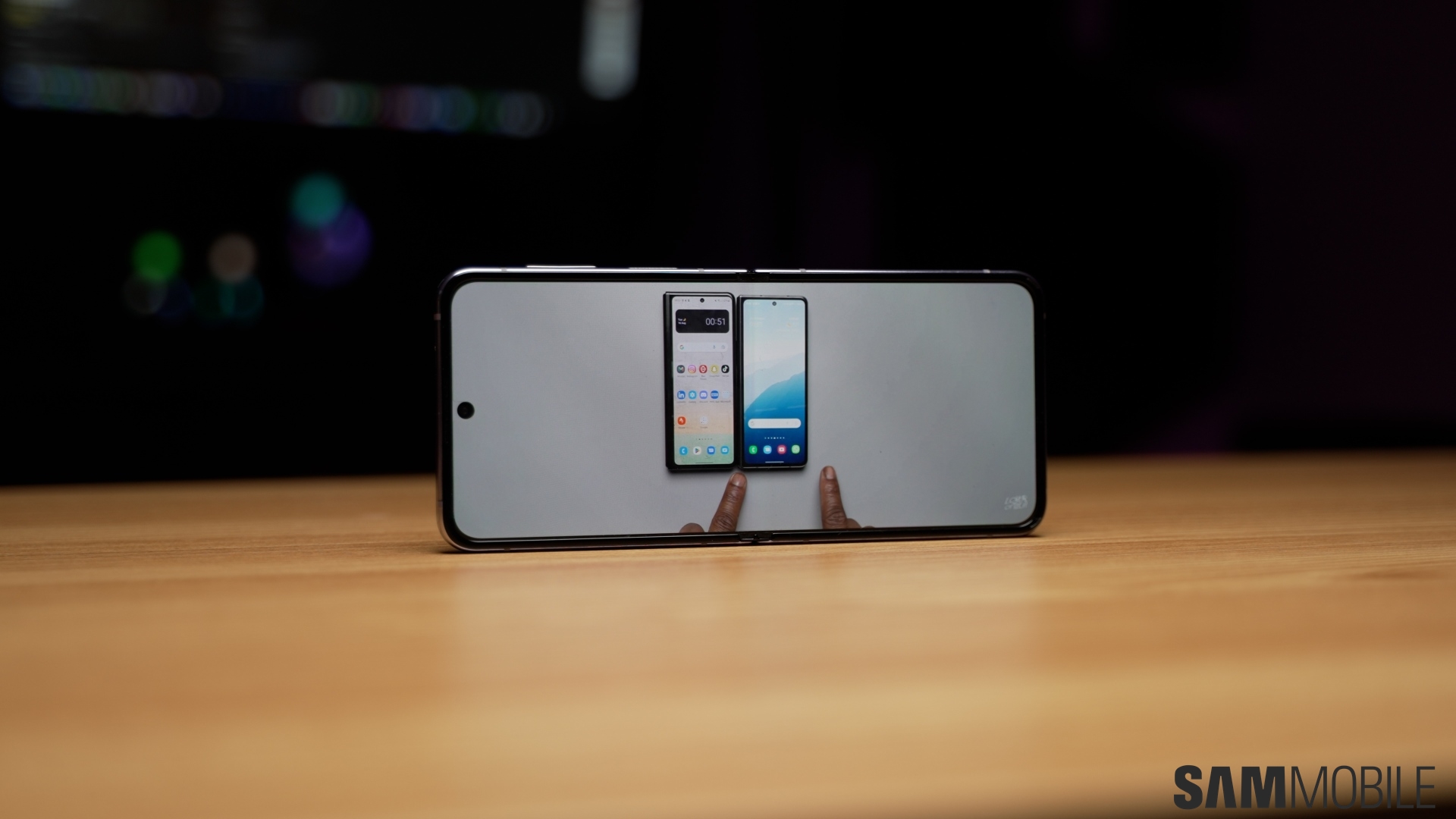 Unfold the device and you’re greeted by the 6.7-inch Full HD+ AMOLED foldable display with a 1Hz to 120Hz variable refresh rate. The quality is great with excellent color reproduction, generous viewing angles, and decent readability under direct sunlight. The panel still has a crease but you won’t notice it as much, not even when scrolling on the device. The 22:9 aspect ratio is unconventional but necessary because of this device’s form factor.

A new iteration of Samsung’s Ultra-Thin Glass panel is used for the foldable display. Samsung says it’s 20% stronger than the previous iteration. We’re inclined to take the company’s word for it. The foldable panel doesn’t feel flimsy at all and it’s impressive that Samsung continues to improve the durability of its foldable panels.

The cover display on the outside is the same 1.9-inch Super AMOLED panel as the Galaxy Z Flip 3 with a similar resolution and refresh rate. The cover display shows a clock by default but Samsung has made it much more useful with software improvements. It matches the theme you set on the main display using Galaxy Themes, offers new widgets to let you perform tasks like controlling SmartThings devices, shoot quick replies to messages, access Samsung Wallet, and more. 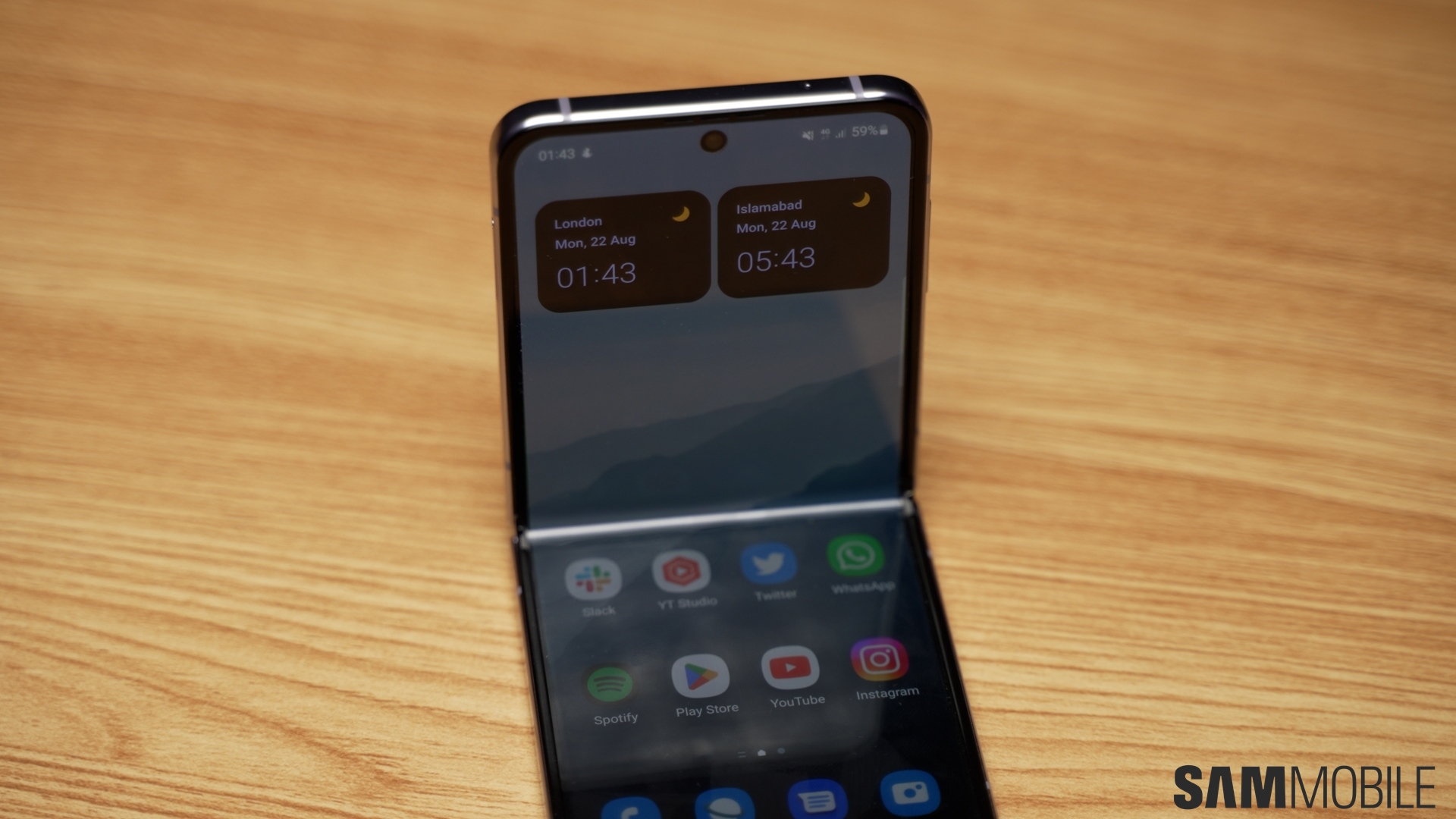 You’re also able to switch between different camera modes when capturing with the device folded shut. The cover display does a good job of providing a fairly decent prevew. Obviously, it would be better if the cover display was larger, but it’s good enough for now.

With Flex Mode, you can take full advantage of the unique form factor by using apps that provide these custom split-screen experiences. YouTube and Google Meet already support the feature with Meta Messenger joining the fray as well. Multitasking features have also been improved to better utilize Flex Mode. 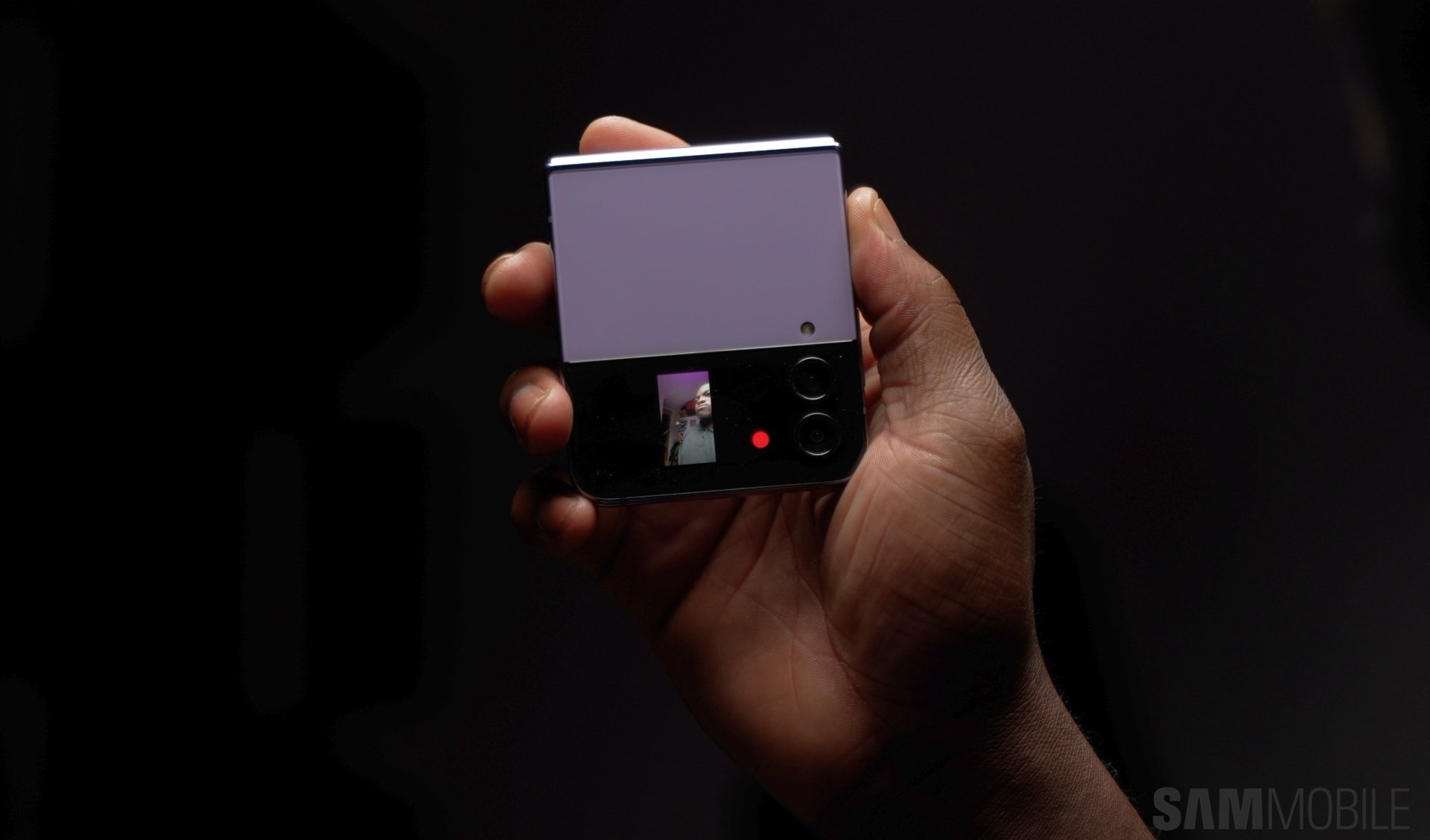 Samsung has withheld any major camera upgrades so it’s a muted affair with the Galaxy Z Flip 4. It has the same 12-megapixel primary and 12-megapixel ultra-wide setup as the Galaxy Z Flip 3. However, the primary sensor itself is marginally wider with a larger 1.8um pixel size. This should, at least in theory, result in brighter images and improved low-light performance. The inner foldable display has a 10-megapixel camera for selfies.

The results speak for themselves as stills shot with the Galaxy Z Flip 4 look noticeably better compared to its predecessor. The shots pick up fine detail with decent contrast and colors that pop. Samsung’s aggressive post-processing is quite evident but fortunately, it doesn’t make the output look artificial.

Low-light performance at night has been improved as well with the resulting shots featuring ample detail and accurate color for the most part. The ultra-wide sensor has a tendency to throw out shots that are over-exposed, but we expect this to improve with software updates down the line.

Both rear sensors are capable of capturing good detail with wide dynamic range. Samsung has also made Optical Image Stabilization (OIS) and Video Digital Image Stabilization (VDIS) better for less shaky images and videos. It works well particularly with the new FlexCam mode that automatically orients the UI when you have the hinge folded 90-degrees.

It would have been great to see a dedicated 3x optical zoom lens on the device. The lack of a telephoto camera is sorely felt. One can only hope Samsung addresses this in the future. 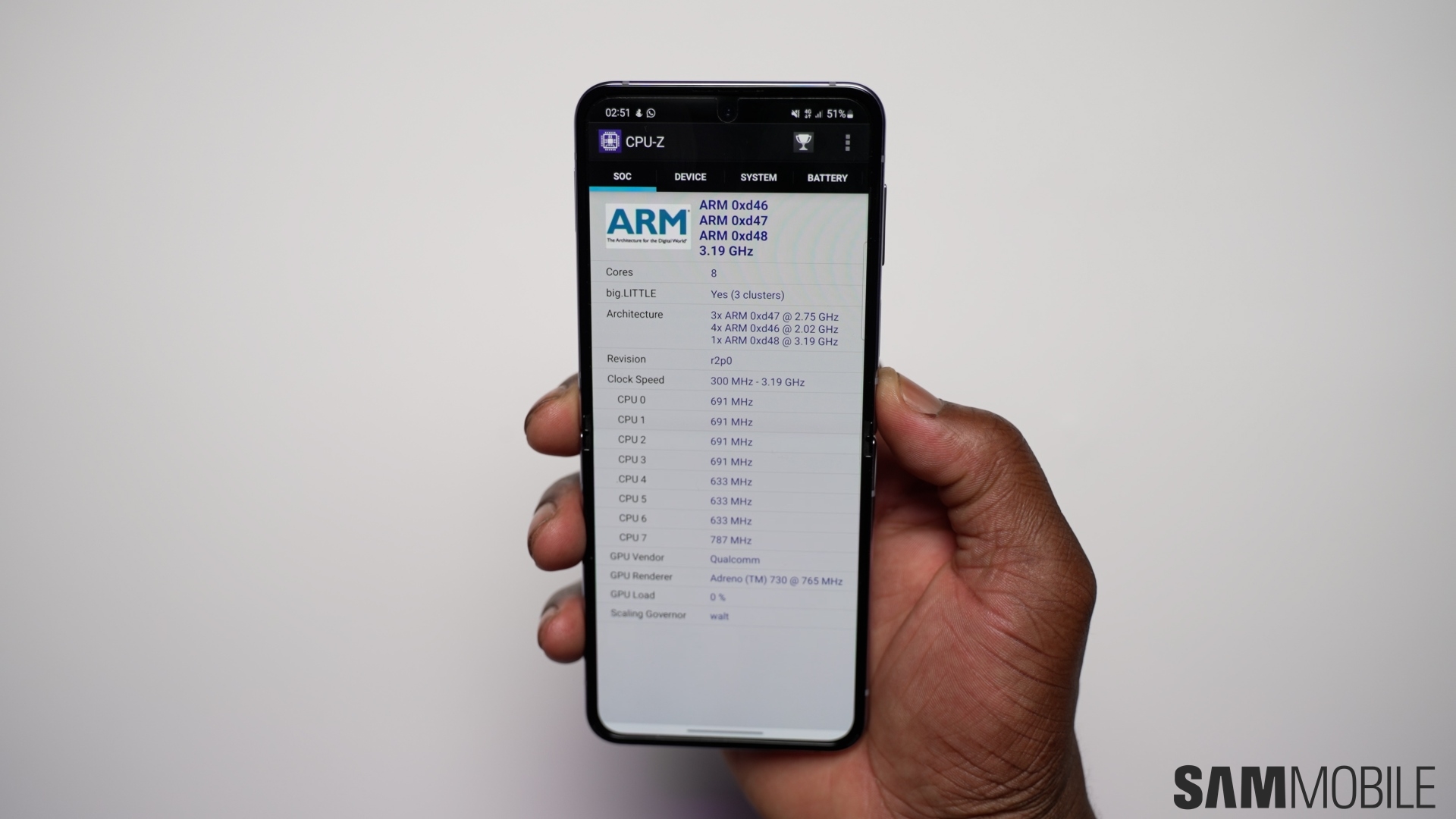 You get the latest flagship chipset with the Galaxy Z Flip 4. Samsung has equipped it with the Snapdragon 8+ Gen 1 so there’s plenty of power under the hood for all of your tasks. The device is paired with 8GB of RAM. It’s a good combination given the form factor limitations of this device. 12GB memory would simply have been overkill.

This device is more than capable of running all of your apps and games. You’ll experience no lags or stutters when flying through the UI. Multi-tasking works like a charm. The hardware and software work in complete harmony, resulting in an elevated user experience. 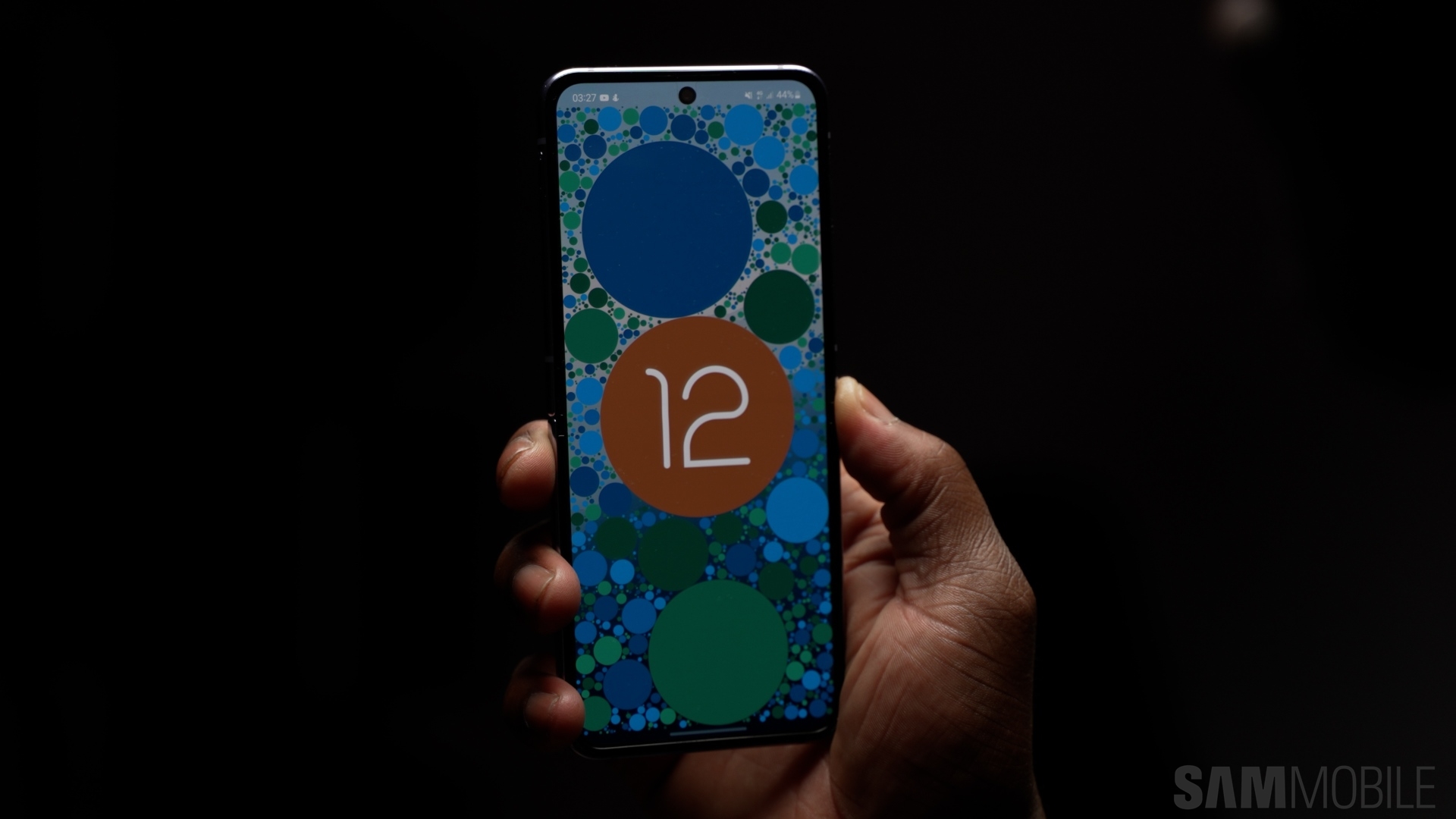 Even though the Galaxy Z Flip 4 came out after Samsung launched the One UI 5.0 beta, it still runs Android 12 out of the box with One UI 4.1.1. It all looks and feels quite familiar. The Galaxy Z FLip 4 is backed by Samsung’s exceptional guarantee of four Android OS upgrades and five years of security updates.

No learning curve if you’ve been using Galaxy devices

All of the features that you’d expect a Samsung device to have are present. What’s still missing is the DeX support. We highlighted this last year as well. Samsung has opted to skip 2022 as the year it brings DeX to the Galaxy Z Flip series. Fingers crossed for 2023! 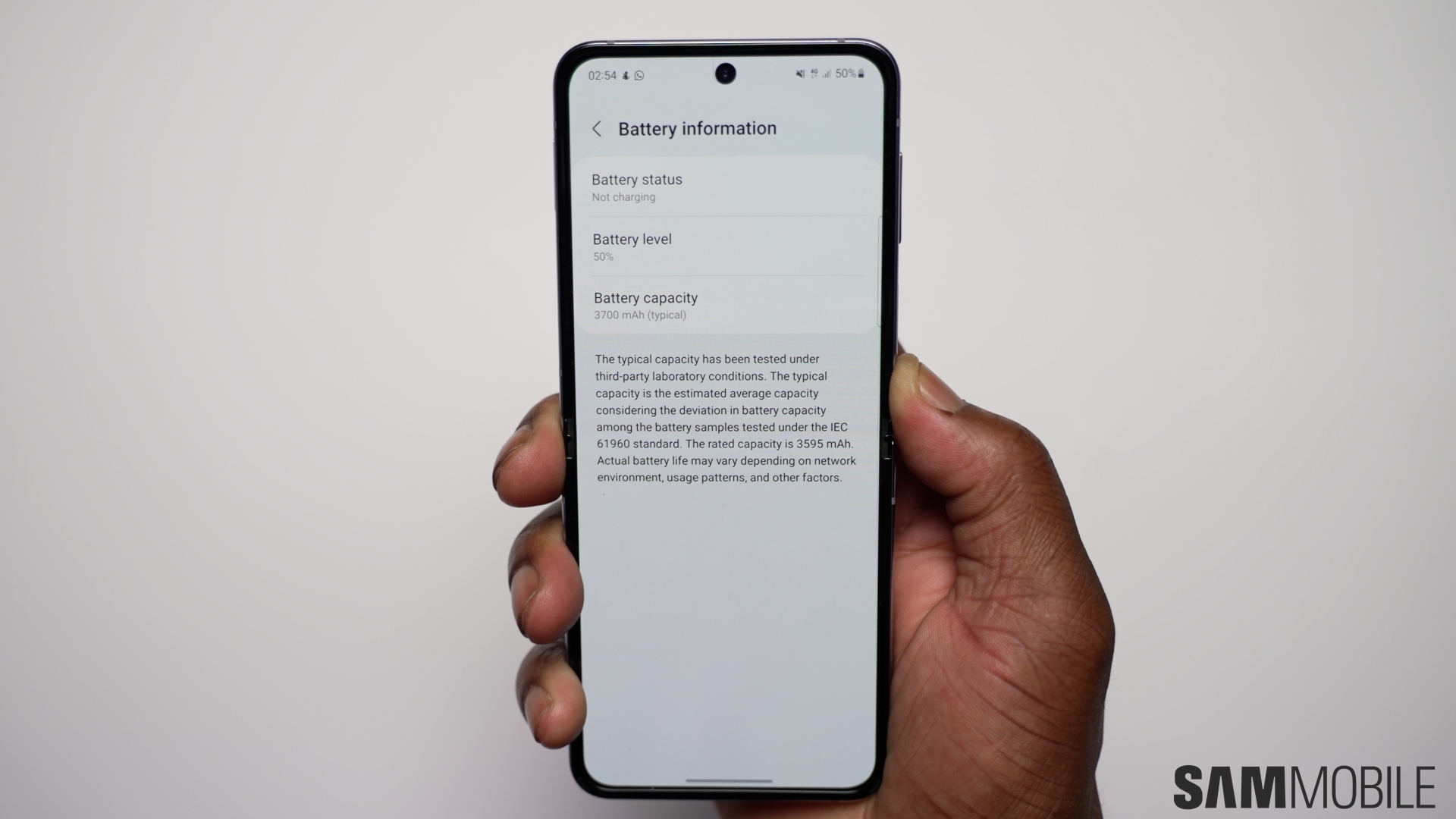 We mentioned in our Galaxy Z Flip 3 review that its battery life was as average as you’d expect from a device with a 3,300mAh battery. This was one of the biggest concerns that Samsung needed to address with the device’s successor. It has done that to some extent. The Galaxy Z Flip 4 has a 12% larger 3,700mAh battery.

The bump in capacity itself is enough to ensure that your device lasts the entire day on a single charge. Efficiency improvements delivered by the chipset, adaptive display, and smart power management enable you to stretch out the battery endurance even further. As someone who has been using the Galaxy Z Flip 3 for a year, the larger battery is one of the primary reasons why I’m switching to the new mode.

Higher charging speed is much appreciated 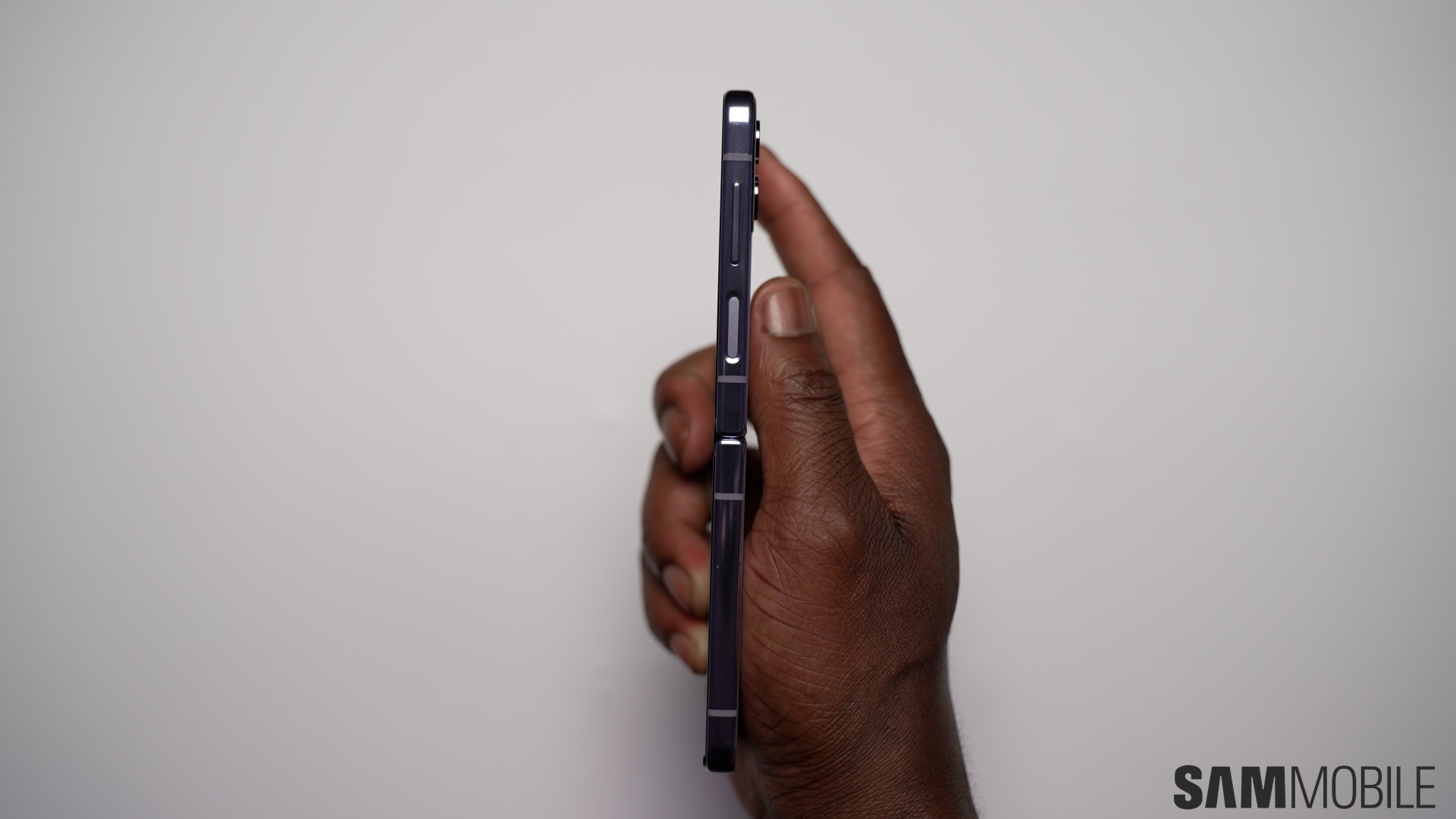 You get stereo speakers on the device as the earpiece doubles as the secondary speaker. The speaker quality is good, even though the setup doesn’t really get as loud as some of Samsung’s other flagships. When compared to the Galaxy Z Flip 3, its performance is more or less the same.

Headphone jacks aren’t a thing for the Z Flip series and this latest model is no exception. So you can either use USB-C headphones or opt for wireless earbuds. Samsung launched this device alongside the Galaxy Buds 2 Pro. You can check out our Galaxy Buds 2 Pro review to learn more about the new earbuds.

Starting at $999, the Galaxy Z Flip 4 delivers excellent value for money. If you passed on the Galaxy Z Flip 3 last year, buying the new model is a no-brainer. It’s an even more perfect version of a device that was already pretty solid to begin with. There’s no doubt that the Galaxy Z Flip 4 will help Samsung expand its dominance of the foldable market.

Most of the Galaxy Z Flip 3’s shortcomings have been addressed by this device. Everything from the software improvements to the enhanced camera functionality and the larger battery shows that this was a refinement exercise for Samsung. It has done that brilliantly. The Galaxy Z Flip 4 is a truly capable device in a chic and stylish package that’s more durable than its predecessors. Are you still not convinced?