Samsung Galaxy A20e review: One A too many 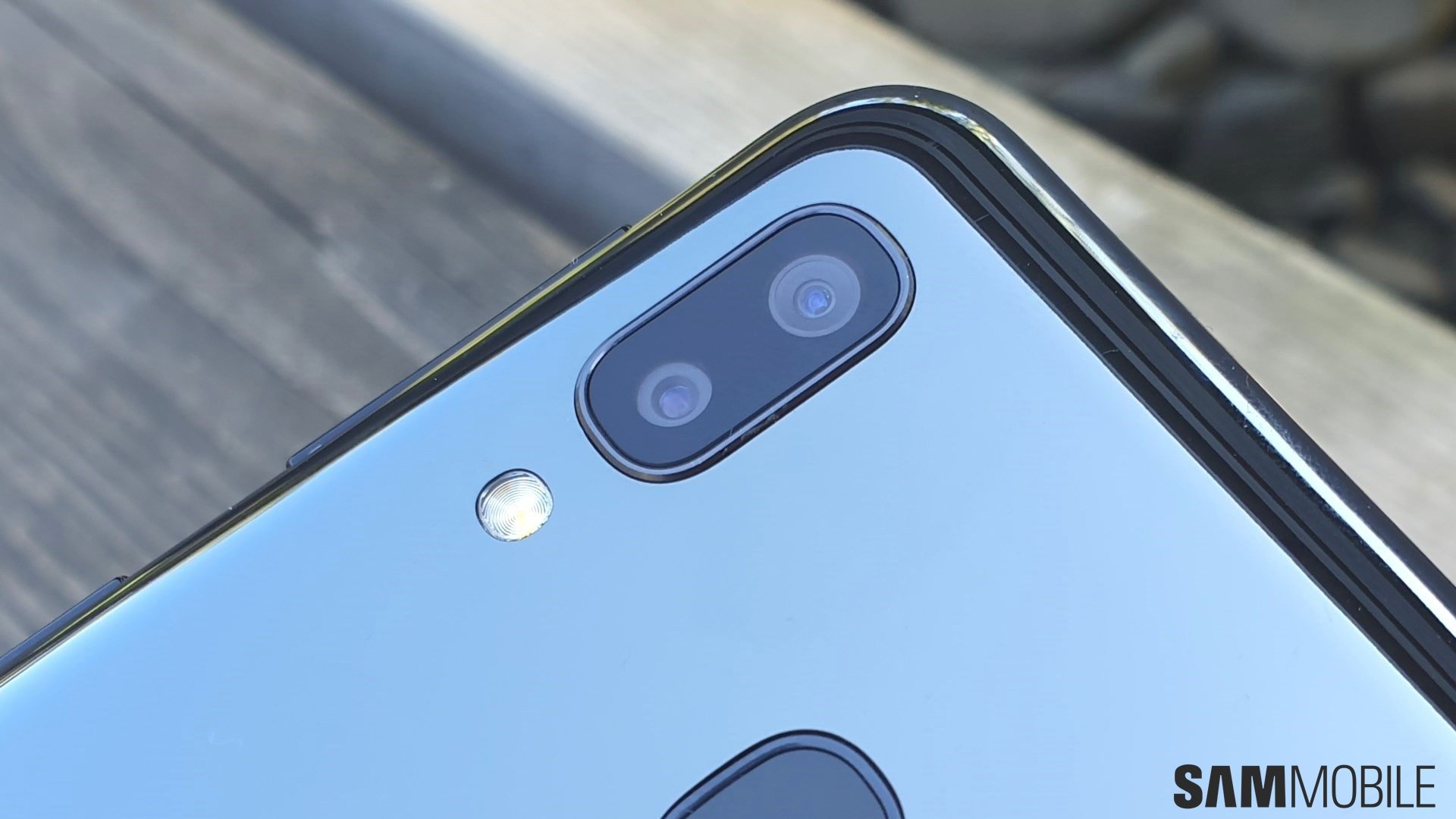 In several markets, Samsung kept its Galaxy A devices away from the low-budget segment for a long time. Now, with the J series gone, several A series devices have prices dipping below €200. One of those has been in our pocket over the last few weeks. Read on to get to know the Galaxy A20e better and find out what’s good, what’s not, and whether it meets your – or anyone’s – smartphone needs. 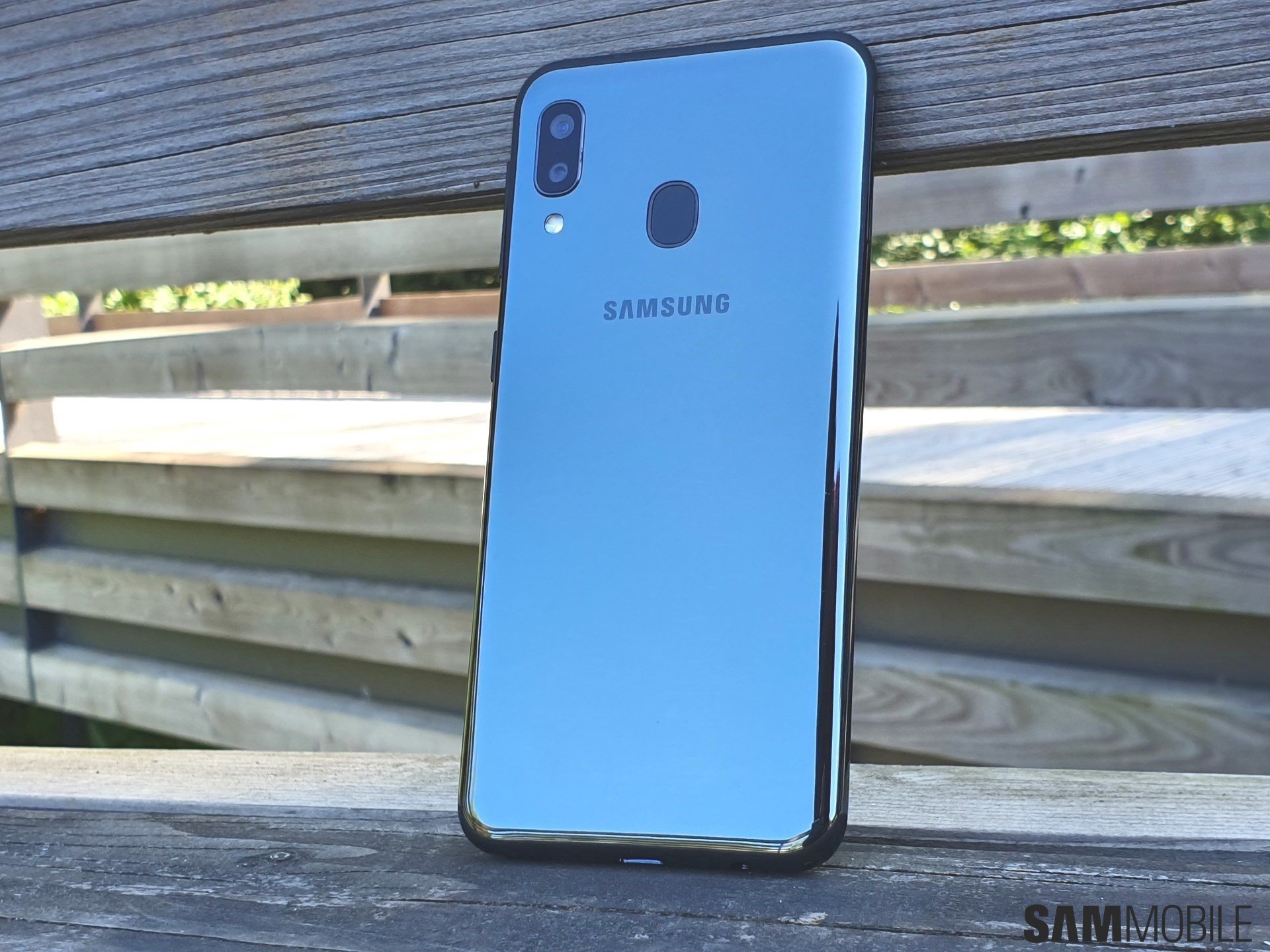 If you’ve seen the Galaxy A40 (read our review here), you have basically also seen the Galaxy A20e. Visually and size-wise, both phones are nearly identical. Like the A40, the Galaxy A20e is a relatively compact phone with its 5.8-inch display and narrow bezels. The body is made of plastic, but it is the solid kind that feels like it can handle everyday life. All hardware keys are on the right side, and easily reachable even for those who have average-sized hands.

On the back is the fingerprint scanner, which too is within comfortable reach of your fingertips. Flip the Galaxy A20e back once more, and you will find the front camera sitting in a notch in the display. Samsung may have pretended for a while that notches are silly, but now they are part of even the Korean OEM’s budget lineup. It’s fine, you get over it. Overall, the Galaxy A20e is comfortable to hold. It’s not a premium device, but it feels solid and its design holds up well in day-to-day usage.

As good as that sounds, we now must turn to the display of the Galaxy A20e. And this is where our enthusiasm is quickly tempered. The phone does not have the AMOLED display that makes so many Samsung devices look impressive. Instead, we must make do with a TFT LCD panel that is inferior in all aspects. Contrast, sunlight legibility, and color reproduction are no match compared to the Galaxy A40. 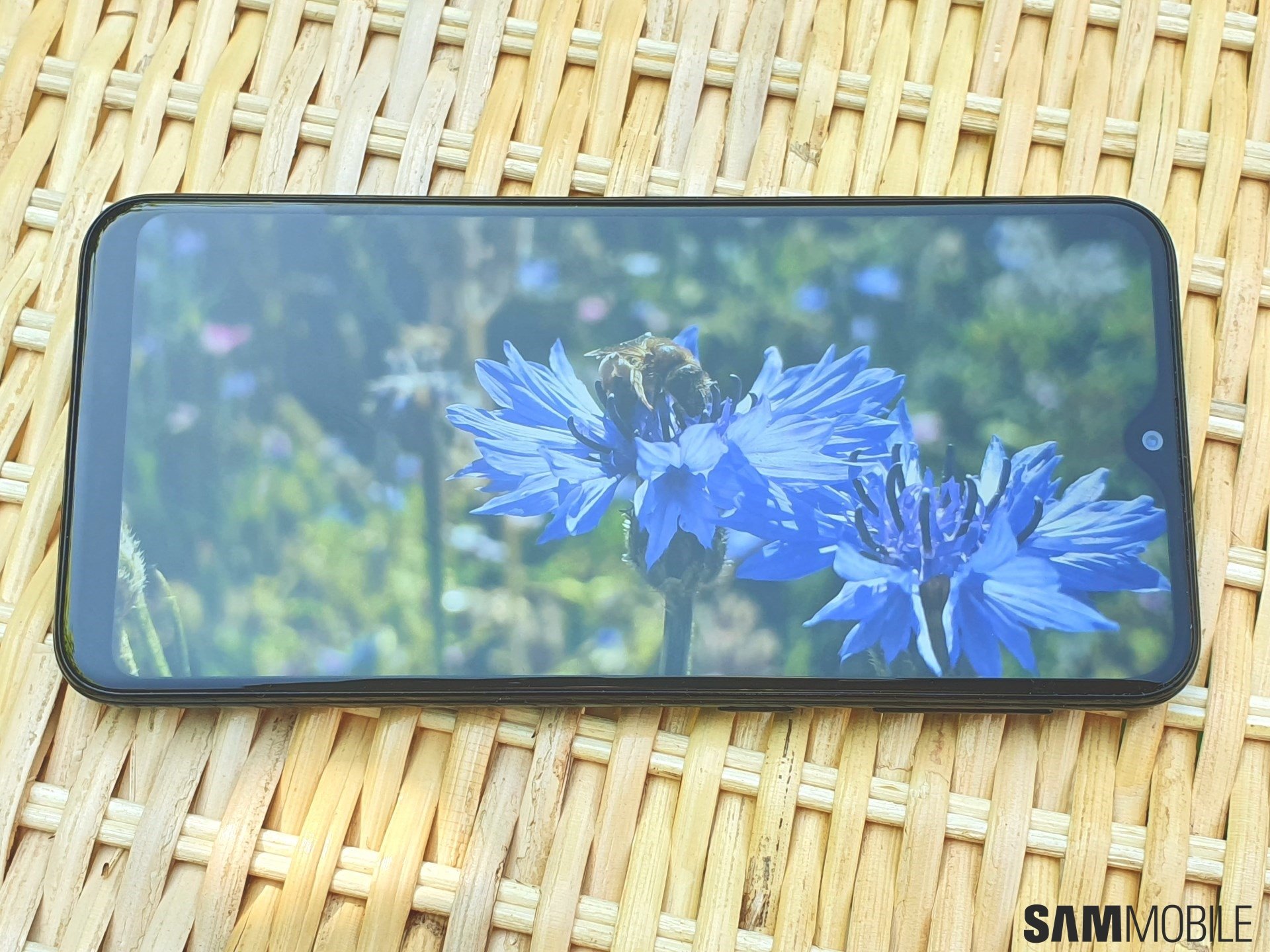 Samsung has, of course, more often saved cost by including a cheaper LCD panel in its affordable devices. But in this case, the difference in screen quality between the A20e and the A40 is much bigger than the price gap between the phones suggests. This, you will notice, is a theme we will be running into more often over the course of this review.

It’s worth pointing out that like any other Galaxy this year, the A20e does not have a notification LED. Since the phone also lacks Always On Display functionality, there is no way to see what you missed by just looking at the front of the device. This can only be partially mitigated by the Smart Alert feature, which makes the phone vibrate when you pick it up after missing calls or messages. 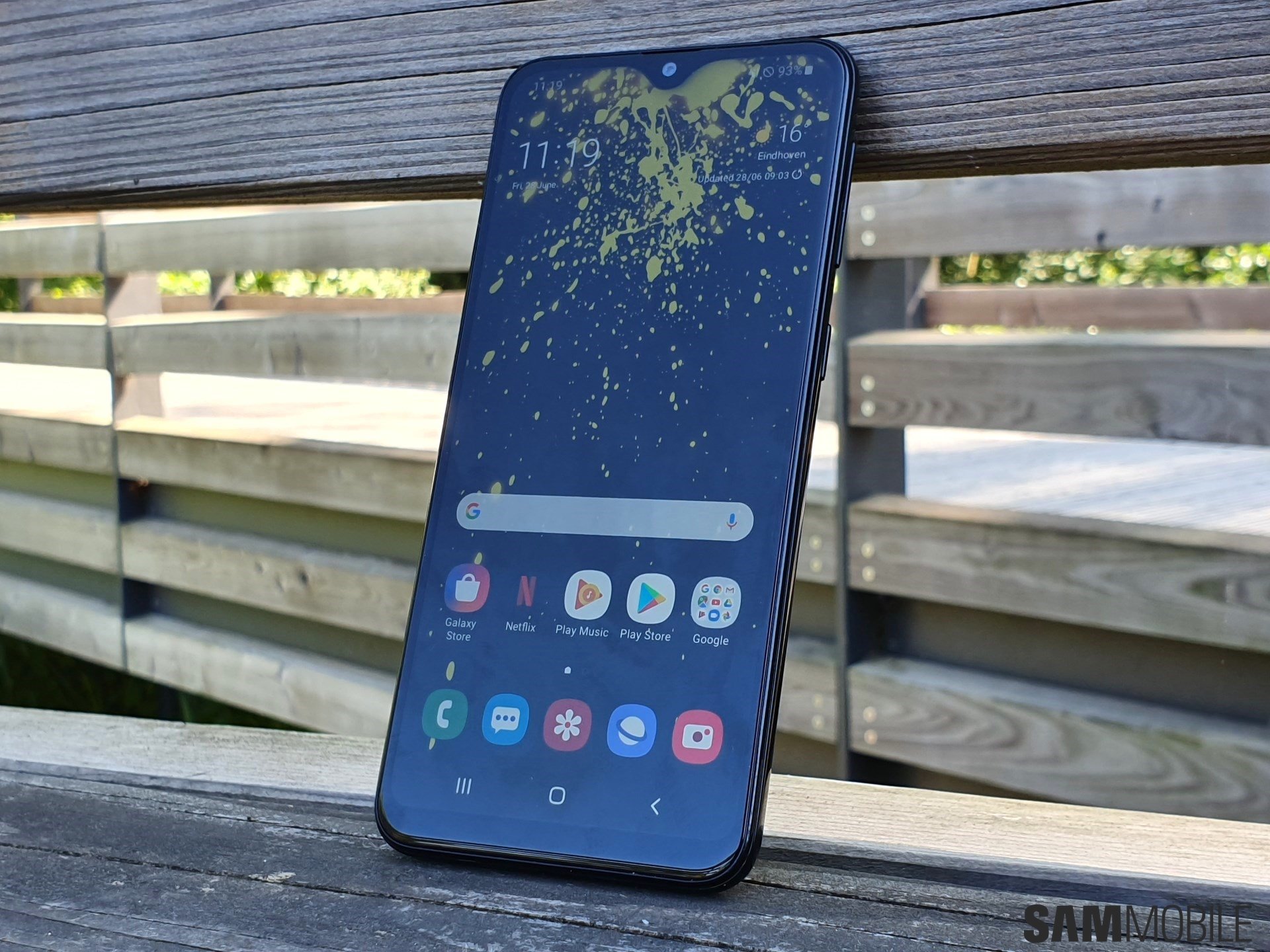 From the outside of the Galaxy A20e, we now move on to the device’s internals. The A20e packs 3GB RAM and Samsung’s Exynos 7884 processor. The latter is merely a less power-hungry variant of the tried-and-tested Exynos 7885. Samsung largely achieved power savings by cutting back the chip’s graphics capabilities.

What we are left with is a phone that does most daily tasks fast enough but should not be considered by anyone who likes to play a game or two. The hardware simply is not fast enough to provide a pleasant gaming experience. This is not mitigated, unfortunately, by the device’s HD display resolution.

Now, before you ask what we expect of a device in this price range, we would once more like to point out: the Galaxy A40 is a bit more powerful. Is the performance gap as big as the price gap? Perhaps not, but add that to the comparable issue we described with the display, and you start to get a sense of where all this is going.

The rear-mounted fingerprint sensor is fast and accurate, ironically because it is of the ‘older’ capacitive type. That’s right, with higher-spec’d Galaxy devices sporting a cutting edge in-display scanner, it’s mainly at the bottom of Samsung’s portfolio where the fastest, most accurate scanners are now found. A bit ironic, don’t you think?

Another way to unlock your Galaxy A20e is provided through facial recognition. However, the method is flawed, insecure and does not work in dark environments. Stick with the fingerprint sensor and all will be well as far as security is concerned. Call quality and reception, meanwhile, proved unspectacular, and sound quality is as low as the device’s pricing. Just like any other non-flagship Galaxy, the A20e has an FM radio to help spare your data plan. 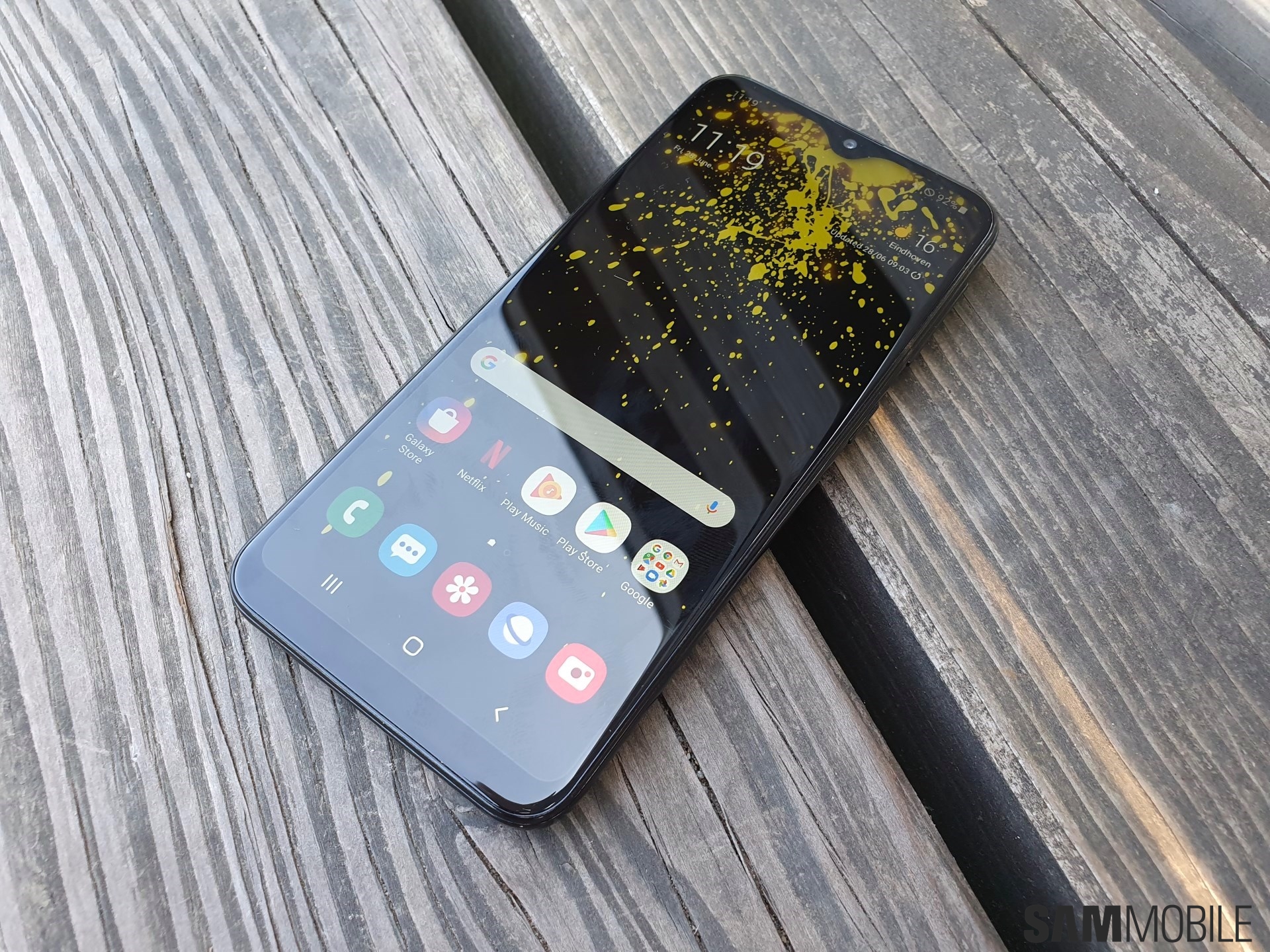 One area where the Galaxy A20e does not diverge all that much from its more expensive siblings is the software. The device runs Android 9 Pie out of the box, with all the One UI glory that most recent Galaxy devices now run.

The A20e has themes, a Night mode, Secure Folder, Samsung Pass, and the one-handed optimization for Samsung’s own apps and interface. Though Samsung has been adding more and more features over the past years, after a period of minimization, One UI still presents a clean environment with logical menus.

Overall, the Galaxy A20e offers a complete package with lots of useful features. So, what about the future? Samsung has put the Galaxy A20e on its list of devices that will receive new security patches every three months. Though we do not know for certain, we assume the phone will get the regular A series treatment regarding Android upgrades. If so, the device should get an upgrade to Android Q in 2020, and to Android R in 2021. 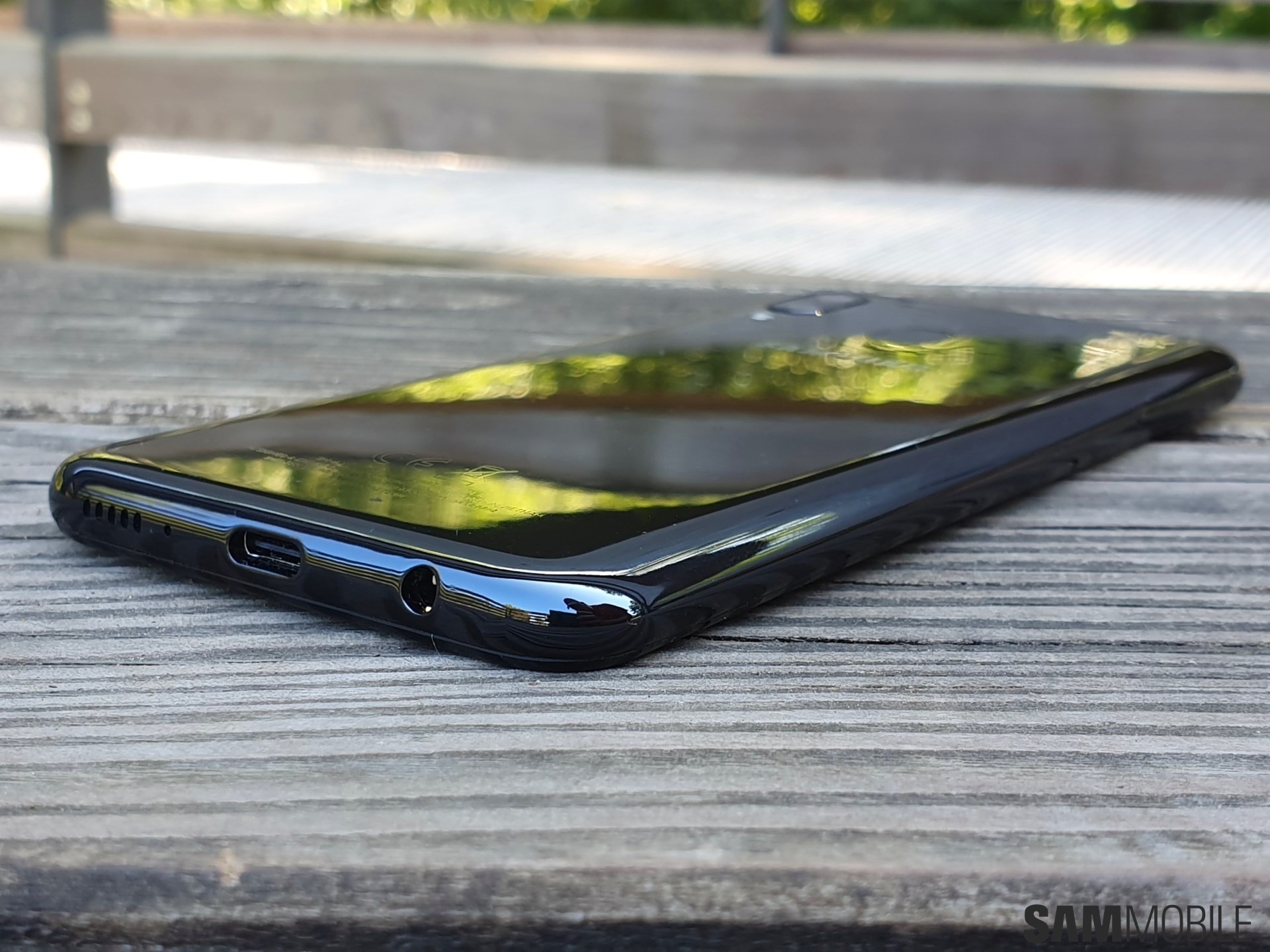 All the big devices in this year’s Galaxy A series come with rather large batteries. However, the A20e is powered by a more modest 3000 mAh power pack. The A40’s battery has a slightly bigger 3100 mAh capacity, though we did not think the Galaxy A20e does worse in terms of battery life. On the contrary, if anything, the toned-down soc and the lower display resolution help the Galaxy A20e last longer than the A40 on most days.

Overall, the A20e is not a miracle worker here, but the phone will get you through a heavy workday without hesitation. And even if it does not, fast charging support helps top up your battery quickly. We would not go so far as to say battery life is the key selling point for the Galaxy A20e, but it will not give you any cause for concern. 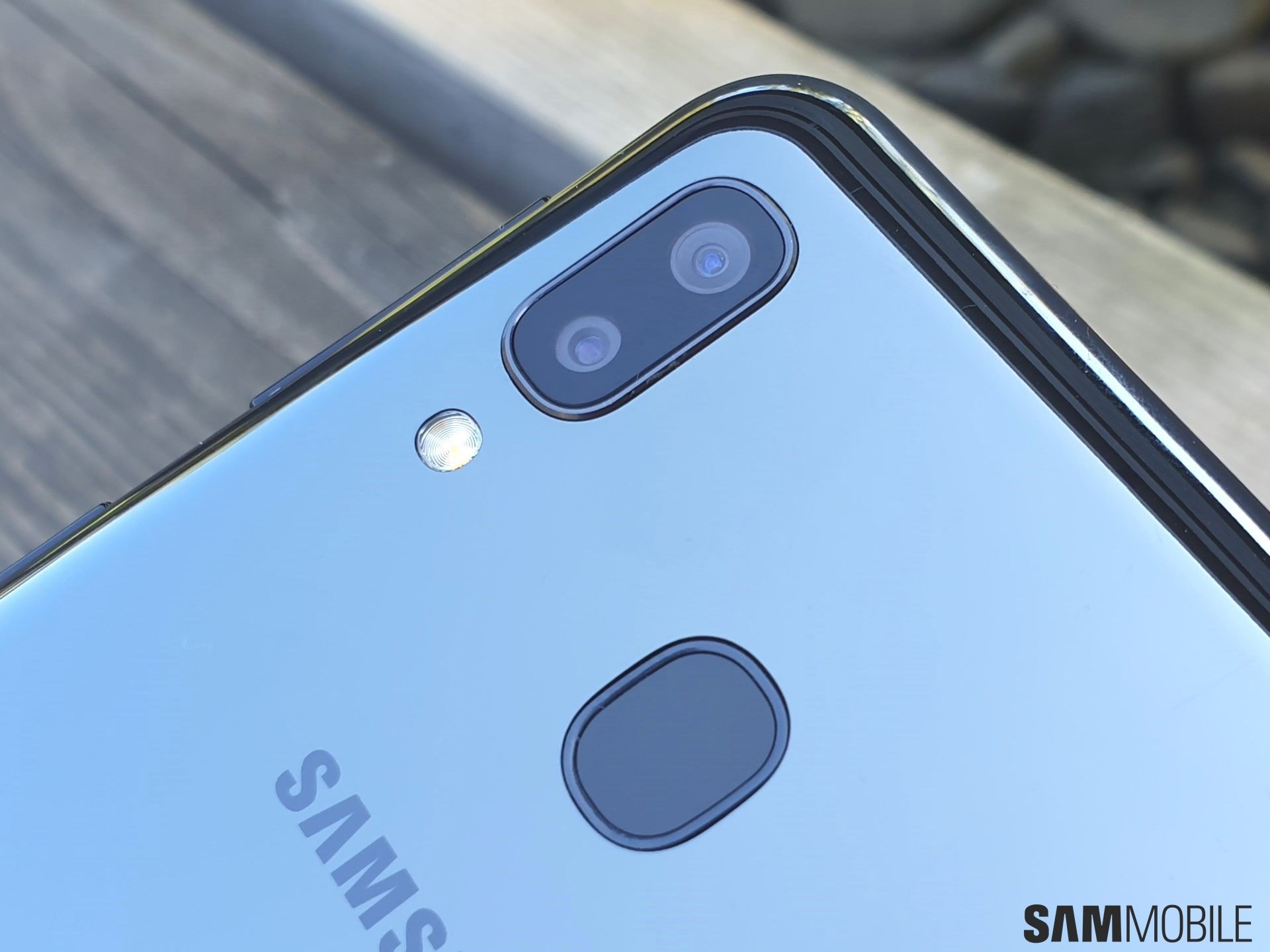 The Galaxy A20e’s cameras don’t give any cause for concern, either. The dual camera on the back consists of the 13-megapixel main sensor and a 5-megapixel ultra-wide lens. Stick to well-lit environments, keep your expectations regarding detail and dynamic range modest, and you will generally be a happy camper if you mostly shoot a few pics here and there to share on social media and the messenger services of your choice.

The Galaxy A20e’s camera does support real-time HDR but lacks Samsung’s Scene Optimization feature, which optimizes the color and contrast for each photo depending on the type of subject being captured. The phone also lacks features like slow-motion recording or AR Emoji.

The 8-megapixel front camera performs comparably: enough light gives you fine selfies, and the Live Focus feature even provides some basic blurring for your backgrounds. Still, this is the lower end of Samsung’s product portfolio, and the cameras match the pricing. However, once again, we are faced with the same issue. The camera of the Galaxy A20e is pretty decent. But the A40’s offers quite a few more features for only a little more money.

We are sure you have, by now, caught on to the gist of this review. The Galaxy A20e is a cheap device, and it is not hard to spot all the concessions Samsung made in order to keep it affordable. By itself, that is just fine, and if you do not care about performance or display quality, this compact phone should serve you well. Battery life is fine, plus it charges quickly. Daylight camera performance does not disappoint.

Still, the A20e is outclassed on all fronts by the Galaxy A40, which in many markets only costs a fraction more. If it is in any way possible, we suggest saving up a bit longer to get the phone that offers substantially more bang for just a little more buck.

Perhaps when, in the next few months, the A20e’s price drops, it will become a more sensible purchase. For now, it is clear that Samsung has not managed to avoid one risk that comes with the launch of such an extensive A series lineup: too little differentiation. With the A40 being Samsung’s compact budget king this year, the A20e is a device no one really needs.