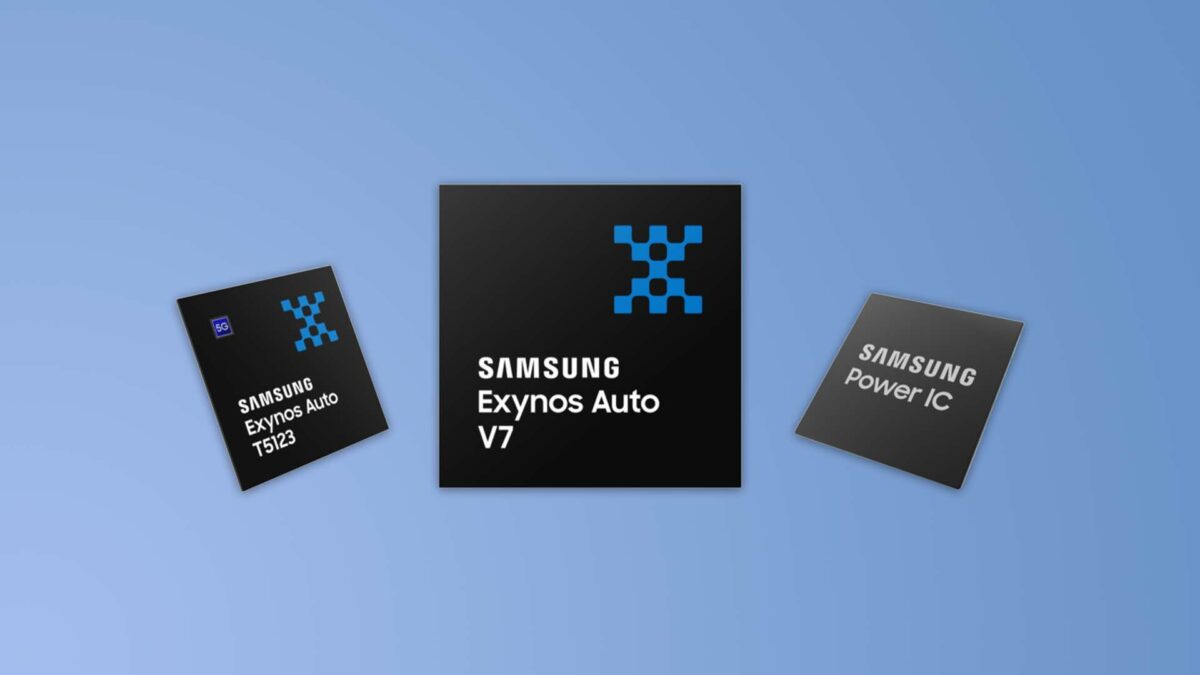 Jaehong Park, Executive Vice President of System LSI Custom SOC Business at Samsung Electronics, said, “Smarter and more connected automotive technologies for enriched in-vehicle experiences including entertainment, safety and comfort are becoming critical features on the road. With an advanced 5G modem, an AI-enhanced multi-core processor and a market-proven PMIC solution, Samsung is transfusing its expertise in mobile solutions into its automotive lineup and is positioned to expand its presence within the field.”

Exynos Auto V7 is being used by Volkswagen’s latest cars

The Exynos Auto V7 offers powerful processing performance, thanks to its octa-core Cortex-A76 CPU clocked at 1.5GHz and the 11-core Mali-G76 GPU. The GPU is divided into two separate clusters: 3 power-efficient cores for cluster display and AR-HUD and eight powerful cores for infotainment systems and other displays. The chipset supports up to 32GB LPDDR4X RAM with 68.3Gb/s memory transfer speeds. The Exynos Auto V7 also features an NPU (Neural Processing Unit) for processing audio and visuals such as face, speech, and gesture recognition.

Since new-age cars have multiple displays, Samsung has equipped the Exynos Auto V7 to handle up to four displays and 12 camera inputs. It has three HiFi 4 audio processors for an immersive audio experience. The chipset also offers bad pixel correction, dynamic range compression, and geometric distortion correction so that the visuals users see are noiseless and distortion-free, which further improves 3D parking view and parking assistance. For data security, Samsung offers a hardware key for the chip using an OTP (One-Time Programmable) or PUF (Physical Unclonable Function).

Samsung said that Volkswagen will use the Exynos Auto V7 in its latest cars for the infotainment system, and the mass production of the chipset has already started.

The Exynos Auto T5123 is a 5G chipset that brings fast data connectivity to cars so that users can stay connected, stream high-definition videos, or even play online games while on the go. It supports both SA (Standalone) and NSA (Non-Standalone) 5G networks and offers a maximum download speed of up to 5.1Gbps. The chipset features two ARM Cortex-A55 CPU cores, LPDDR4X RAM, GPS, and compatibility with the PCIe interface.

It is the company’s first ISO 26262-certified power management chip. It also received the ASIL-B (Automotive Safety Integrity Level) certification, with D being the highest level. This certification is awarded after analyzing the severity, exposure, and controllability of vehicle operations in several test environments.

The company is already supplying Exynos Auto chipsets to various car manufacturers, including Audi and Volkswagen. With these new chips, Samsung wants to become an important player in the connected car ecosystem, just as it did in the smartphone ecosystem over the years.