Samsung has another Android OS beta program running behind closed doors. We learned about the internal One UI 5.0 beta for the Galaxy S22 series a couple of weeks ago, and now, Samsung appears to have launched a One UI 4.1.1 beta firmware for the Galaxy S21 Ultra in the UK.

The One UI 4.1.1 update, discovered by a Reddit user, carries firmware version G998BXXU5DVGA. However, nobody outside of Samsung’s trusted circle of employees can download and test this One UI 4.1.1 beta firmware on their Galaxy S21 Ultras. The general public will have to wait for a public One UI 4.1.1 beta program to launch before anyone can test Samsung’s pre-release firmware.

One UI 4.1.1 is based on Android 12L and should debut with the upcoming Galaxy Z Fold 4 and Galaxy Z Flip 4. The foldable phones will hit the stage at Unpacked on August 10.

The Android 12L update is focused on multitasking and productivity features for large-screen devices such as the Galaxy Z Fold series, so it will be interesting to see what it will have to offer Galaxy S21 Ultra users.

The Galaxy S21 series shipped with Android 11 and is eligible for four major Android OS upgrades. It is very likely that Samsung will count Android 12L as one, which means that the Galaxy S21’s last OS upgrade might be Android 14 instead of 15. 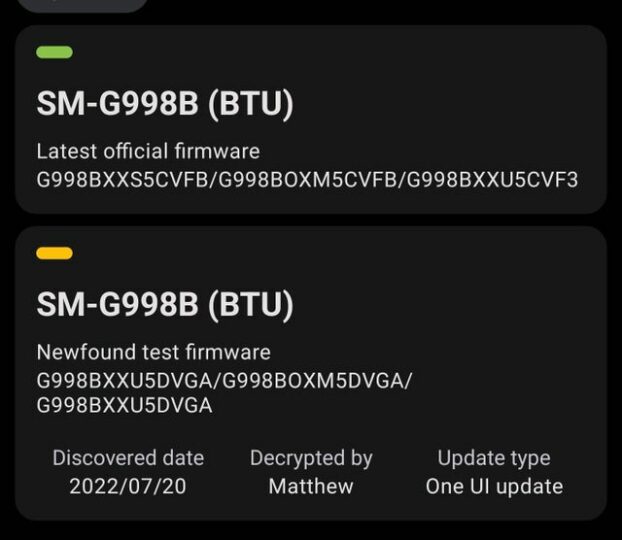