WhatsApp may be the leading cross-platform messaging app in the world but it hasn’t always been the most feature-packed option. Countless other messaging apps have offered more powerful features that enhance the user experience.

The Facebook-owned company has recently been improving its feature set. A great new privacy feature has now surfaced. It will enable you to hide WhatsApp ‘Last Seen’ from some contacts, something that was previously not possible.

WhatsApp’s feature set has improved significantly over the past few years. From longstanding features like WhatsApp Web to new additions like View Once photos and videos, 90-day disappearing messages, quick payments and more. All have added to its appeal.

WABetaInfo has now spotted a few privacy feature that puts users more in control over who can see parts of their profile. The ‘Last Seen,’ ‘About,’ and ‘Profile Picture’ can currently be seen either by everyone, contacts only or no one. No customization was previously possible.

The latest beta version of the app reveals that a new feature is in development that will enable users to hide WhatsApp ‘Last Seen’ from some contacts. The ‘My Contacts Except…’ feature will let users decide who among their contacts can see their Last Seen.

Naturally, if you block a contact from seeing your Last Seen, you won’t be able to see theirs as well. This feature will likely be extended to the Profile Picture and About sections as well.

It’s unclear how quickly this feature is going to be rolled out to the stable version of WhatsApp. Normally it takes a few weeks for features spotted in the beta version to be released for everyone. 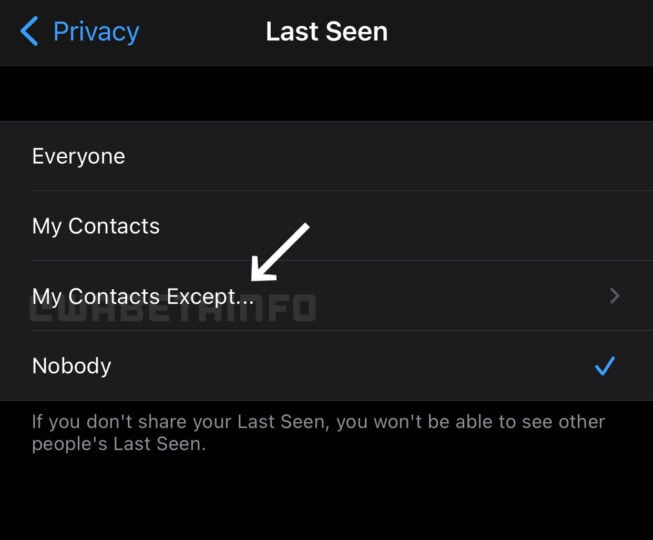 Facebook’s working on a new Community feature for WhatsApp

Your WhatsApp may soon work across multiple Samsung devices

You could soon earn WhatsApp cashback on your Samsung phone