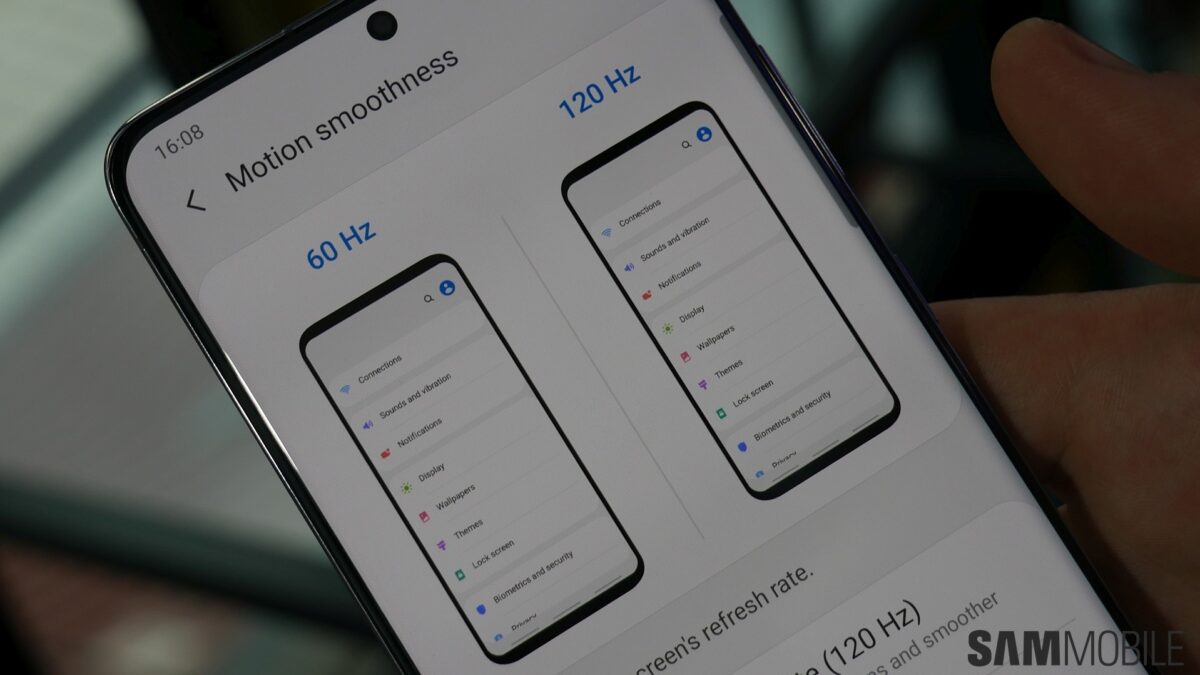 Samsung is reportedly working on changing the way that the Galaxy S20 flagships utilize their new 120Hz-capable displays. As you’re probably aware, the Galaxy S20 lineup’s screens can run at 60Hz or 120Hz, but there are some caveats. Firstly, the high-refresh 120Hz mode is not available for the highest WQHD+ resolution. Secondly, the 120Hz mode is not forced, per se, meaning that the phones can switch back to 60Hz automatically in certain situations, either to prevent overheating or to improve battery life.

Now, according to a couple of rumors passed along via Twitter, Samsung is working on improving its high refresh rate screens in two ways. The company is reportedly already working on allowing the 120Hz mode on WQHD+ resolution, and according to @MaxWinebach, Samsung could implement this mode through a firmware update over the next 1-3 months ‘if all goes well.’

As for the second rumor via @UniverseIce, it comes in the form of an alleged leaked screenshot captured from one of the firmware versions of the Galaxy S20 series. It depicts a different screen refresh rate menu which includes three options instead of two. The existing ‘High refresh rate’ appears to have been renamed to ‘Dynamic’ to better-reflect how the mode works, while a new ‘High’ option would presumably lock the screen at 120Hz.

It’s unclear whether this mysterious firmware is a pre-release version or a newer one currently in development. There’s not enough evidence to support the idea that this is an upcoming feature. Given the lack of information, it could very well be a vestigial feature that has been removed on later firmware versions.

Because quite a few enthusiasts are very vocal about wanting 120Hz on WQHD+ resolution, these rumors may very well turn out to be correct. I don’t think there are too many users who would give up battery life while increasing thermals just for the sake of using 120Hz on WQHD+ instead of FHD+ resolution, but maybe Samsung has more optimizations in mind and it will give these fans the option to go ‘overkill mode’ if they so desire.

Samsung is no stranger to the process of adding features to brand new flagships via firmware updates. Perhaps the company is working on implementing at least one of these changes later down the line. It wouldn’t be outlandish for Samsung to add new features in this manner. Keep in mind that the dedicated Night mode was missing from the Galaxy S10 series at launch, but was added through a firmware update a few weeks after the phones went on sale.

We’ll keep our ear to the ground and let you know if we find any concrete details on the matter at hand. Until then, you probably know the drill when it comes to unconfirmed claims: keep a proverbial pinch of salt nearby and a don’t make plans based solely on preliminary rumors.

Samsung is working on optimizing software for WQHD+ 120hz on the S20 series and should release it in the next 1-3 months if all goes well.

This is one of the firmware versions of the Galaxy S20 series. We see that not only the WQHD + 120Hz mode can be selected, but also the dynamic mode, which is a very mature solution.better than limited to FHD
let's expect Samsung to implement such a solution as soon as possible. pic.twitter.com/mLtFUwH0WZ