Demand for smartphones in Europe appears to be declining, but Samsung maintained the lead in Q3 2022 despite considerable losses. The European smartphone market shrunk by 16% year-on-year, with market watchers saying that shipments were just a little over 40 million units due to economic challenges. Xiaomi capitalized on the Russian market to rise to second place on the podium.

Samsung’s smartphone market share in Europe declined from 35% in Q3 2021 to 33% in Q3 2022. The company did manage to increase smartphone shipments to 13.5 million units in Q3, up from 12.1 million in Q2, but it fell short of the 16.9 million shipments it recorded a year ago. Apple’s shipments also dropped 12%, while Xiaomi’s shipments increased by 4% to become Europe’s 2nd largest smartphone OEM, ahead of Apple and behind Samsung.

Despite these market shifts, Samsung maintained leadership over Europe with a smartphone shipment share of 33%. Xiaomi came in second place with 23%, and Apple held 21% of the market in Q3 2022. Realme (5%) and Oppo (%4) were the fourth and fifth-largest OEMs in Europe during the three-month period.

Market watchers say that Apple could’ve performed better, but China’s lockdown-related supply issues hindered the launch of the iPhone 14 in Europe. Apple sales fell below expectations, as some shipments got delayed into Q4 2022. 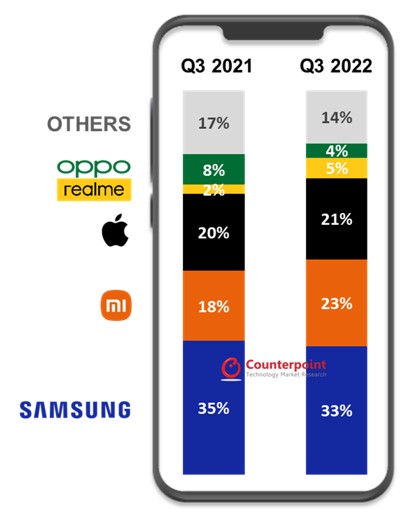