Samsung is having a tough time in the world’s largest smartphone market, China. Things are going from bad to worse for Samsung in the key market. Chinese OEMs are making Samsung an irrelevant player in the fiercely competitive market. More and more data is emerging every day about Samsung’s smartphone troubles in China.

Complete domination by the Chinese firms

According to new data from Counterpoint Research, not a single Samsung smartphone made it to the top 10 best sellers list for 2017 in China. Except for Apple’s iPhone 7 and iPhone 7 Plus, the list is completely dominated by smartphones from Chinese firms. 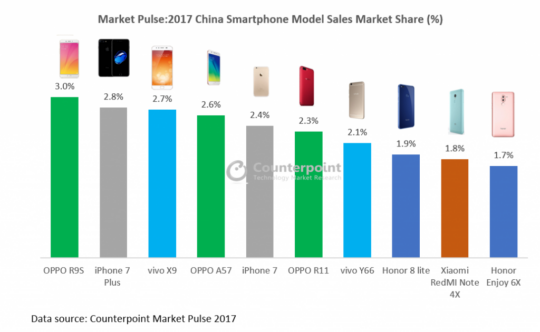 In 2017, Samsung launched some of its finest phones in the form of the Galaxy S8, Galaxy S8+, and Galaxy Note 8. None of the bezel-free Infinity Displays and curved screens were able to change Samsung’s fortunes in China.

Samsung’s market share in China has seen a gradual decline from 20 percent back in 2015 to a paltry 2% in Q3 2017. The market share is expected to have dropped even further to a minuscule 1.6% in the fourth quarter. In Q3 2017, Samsung was ranked ninth in terms of market share in China.  Those numbers pale in comparison to the market dominance enjoyed by Samsung in other markets.

One possible reason for Samsung’s deepening troubles in China is the lack of a robust mid-range and budget smartphone line-up that can compete with the Chinese offerings in terms of value for money. Samsung’s mid-range and budget smartphones come across as expensive and underpowered compared to the competitors’ products in the same price range.  Unsurprisingly, users are also ignoring Samsung’s more compelling flagships options once they get accustomed to other brands. So far, only Apple has been able to capture the high-end market without competing in the lower price segments. It is clear from the Chinese market, Samsung cannot afford that strategy.

Not just in China, Samsung is also facing heat from the Chinese OEMs in many developing markets where brands like Mi, Oppo, and Vivo are in play. Even in the world’s second-largest smartphone market, India, Samsung is facing fierce competition from its Chinese rivals.

So far there is no clear indication of any new strategy by Samsung to stop this downward spiral in China. In other key markets like India, Samsung’s efforts to tackle fierce competition from the Chinese OEMs are a bit more noticeable, even if the efficacy of these efforts is questionable.