Samsung has long been the market leader in India but in recent years, the company has had to put up with intense competition from Chinese rivals. The latest data from Counterpoint Research shows that while Samsung maintained its lead in Q3 2017, Xiaomi came very close to topping Samsung’s smartphone market share in India.

Samsung and Xiaomi accounted for 45 percent of the Indian smartphone market in Q3 2017. This is the first time since 2012 that the top two brands have claimed almost half of the entire market.

Counterpoint’s data shows that Samsung retained its 23 percent smartphone market share from Q3 2016 in Q3 2017 as well. The company continues to dominate as it still caters to Indian featurephone users. Samsung has pulled out of the featurephone segment in many other markets.

Xiaomi accounted for 6 percent of the smartphone market share in the third quarter of last year. Its market share surged to 22 percent in Q3 2017, a mere one percent below Samsung’s.

That’s not all. Three of the top five best-selling smartphones in India were from Xiaomi. Samsung only managed to get one handset – the Galaxy J2 – on that list in the fourth position.

Samsung certainly needs to do more if it wants to hold on to its lead in India. If it doesn’t, Xiaomi certainly won’t need an invitation to overtake its South Korean rival. 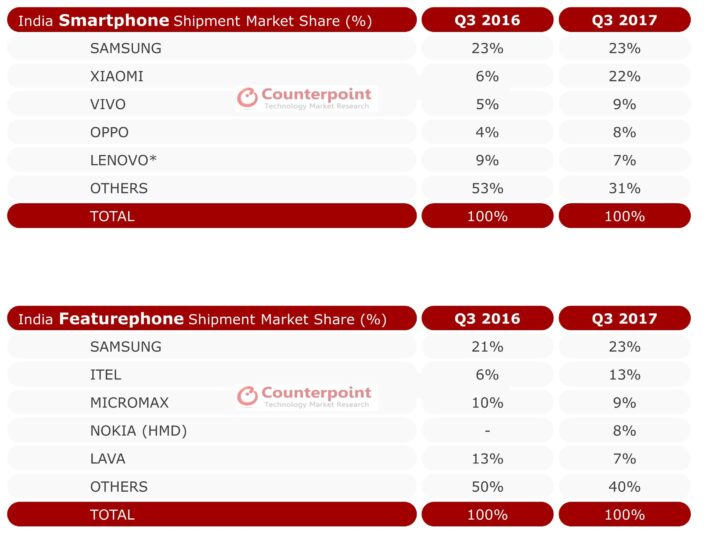