The final quarter of 2016 was an interesting one for the Indian smartphone market. Local manufacturers were pushed out of the top five rankings as Chinese contenders continued to gain ground in the country’s lucrative smartphone market. Despite being the top smartphone vendor in the country for many years, even Samsung is feeling the pinch as data shows that it shipped fewer smartphones in Q4 2016 compared to the same time a year ago.

Data from market research firm Canalys shows that Samsung shipped 7.0 million handsets in Q4 2015 and accounted for 25 percent of the market as opposed to shipments of 6.2 million and a 22 percent market share in the same quarter last year.

On the other hand, Xiaomi has improved its position in the Indian market considerably. It’s estimated to have shipped 3.0 million units last quarter with an 11 percent market share against shipments of 0.9 million and 3 percent market share during the same period in 2015. That’s an impressive growth of 232 percent. Four of the top five smartphone vendors in India in Q4 2016 are Chinese and given the pace at which they’re going, it will be very tough to catch up to them.

Samsung surely has a lot of work to do if it wants to keep holding on to that lead. 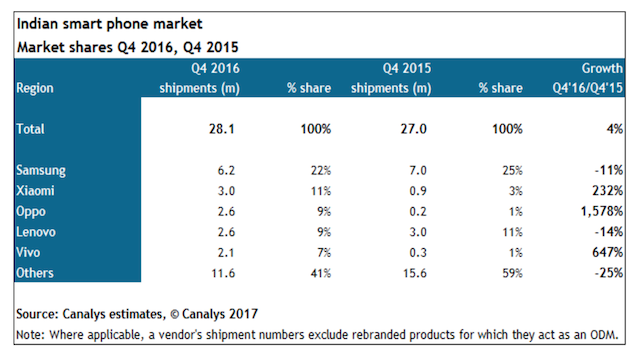