Samsung remains on top as Apple overtakes Xiaomi in India

It’s no secret that Samsung has been coming under increasing pressure in the global smartphone market and it doesn’t expect things to get better substantially in the near future. Clearly the company has its work cut out and it’s safe to say that Samsung is going to give it everything it has got. Latest figures from the International Data Corporation for Q4 2015 show that Apple has overtaken Xiaomi and it’s now the sixth largest smartphone vendor in India. Samsung retains its lead in this crucial market with 30 percent of the share while local competitor Micromax comes in second place with 14.7 percent of the market.

IDC tracks the monthly smartphone shipments in the 30 leading cities of India, it says that these 30 population centers make up more than 50 percent of the entire smartphone market in the country. Samsung and Micromax occupy the top two positions on the list with Lenovo taking 10.1 percent of the market to come in third. Intex and Lava come fourth and fifth respectively with 8.2 percent and 7.1 percent respectively. Xiaomi is now down to seventh place with 3.5 percent of the market. Other OEMs such as BlackBerry, Microsoft, etc accounted for 22.4 percent of all smartphone shipments in the country combined in the last quarter of 2015. 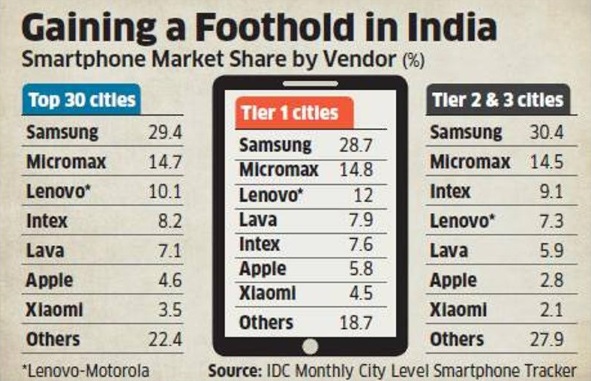 More news »
Samsung heir Lee could end up being arrested once again By Adnan F.|2 months ago
Samsung and AMD could end up powering the next Nintendo Switch By Adnan F.|3 months ago
A look back at Samsung’s most notable mobile products of the decade By Mihai M.|8 months ago
Samsung’s new green initiative puts the planet first By Sumit Adhikari|1 year ago
SamMobile Shop
Opinions More »
Reasons why you may want to avoid buying the Galaxy Watch 3
2 days ago