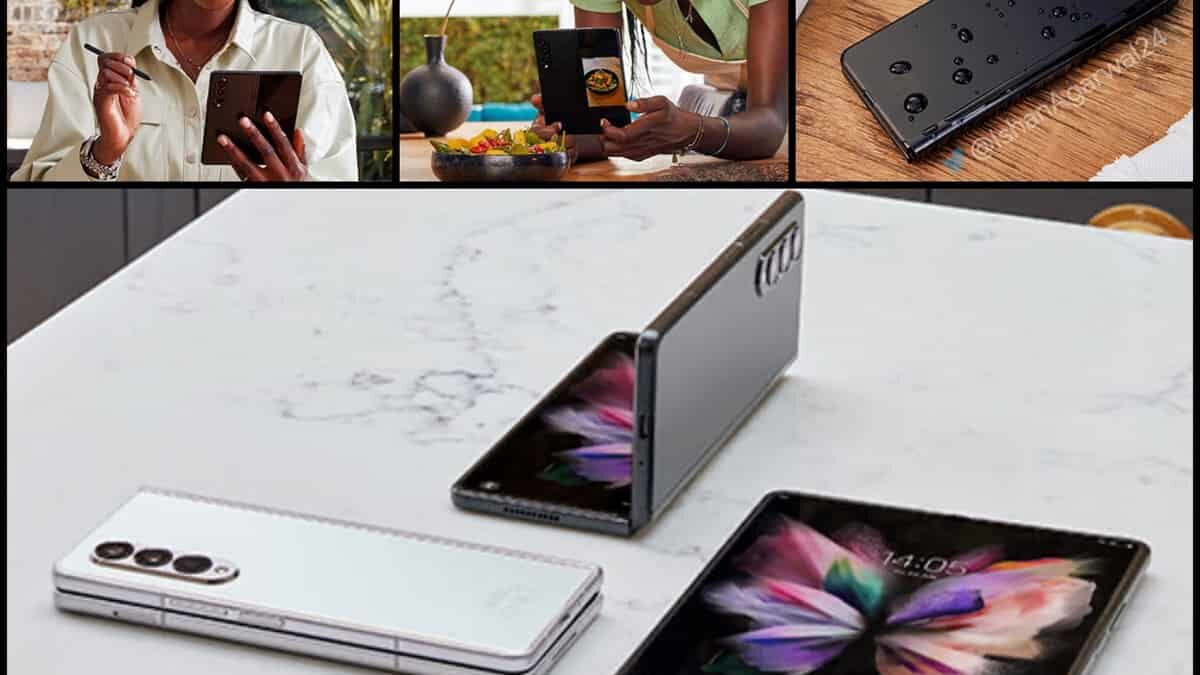 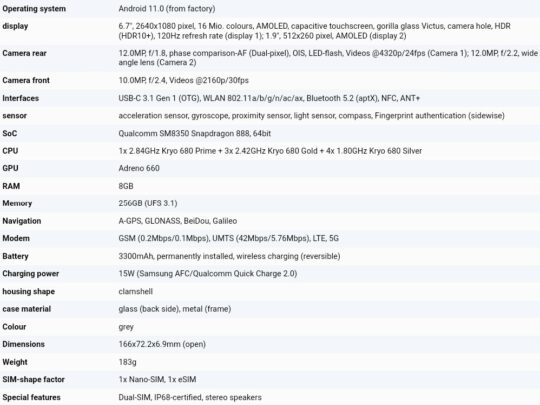 Starting with the Galaxy Z Flip 3, we get a 6.7-inch FHD+ AMOLED panel clocked at 120Hz and a secondary 1.9-inch screen for notifications. Two 12MP cameras (wide-angle and ultra-wide-angle) handle photography. The primary lens has an aperture of f 1.8 and supports optical image stabilization. Although the spec sheet says that it can record 8K video, that is physically impossible for a 12MP sensor to pull off, so that part is incorrect.

Under the hood, the Galaxy Z Flip 3 gets a Snapdragon 888 SoC along with 8GB of RAM and 128GB of storage. Connectivity options include 5G (probably only sub-6GHz networks), Bluetooth and Wi-Fi 6. Lastly, the smartphone draws power from a 3,300mAh that supports 15W fast charging. The Galaxy Z Flip 3 also has an IP68 rating, something is quite rare for a foldable. 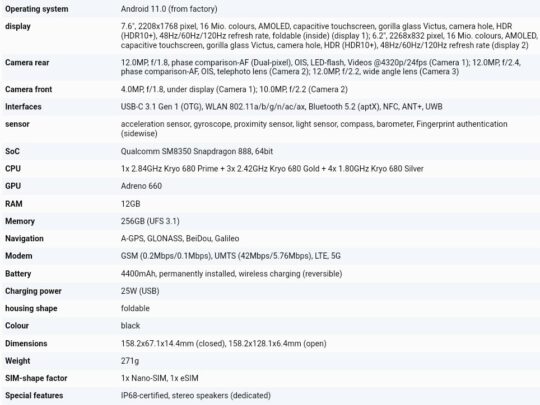 Moving on to the Galaxy Z Fold 3, its 7.6-inch inner AMOLED display has a resolution of 2,208 x 1,768 pixels, 120Hz refresh rate, HDR10+ support, and a layer of ultra-thin glass for protection. The cover display uses a smaller 6.2-inch 2,268 x 832 pixels AMOLED panel which is also clocked at 120Hz and has the same properties as the inner panel. There’s a layer of Corning Gorilla Glass to protect it from daily wear and tear.

Contrary to previous reports which speculated that the Galaxy Z Fold 3 would run a Snapdragon 888+, the foldable is rumoured to run a Snapdragon 888 SoC coupled with 12GB of RAM and 256GB of storage, for some reason. This is at odds against earlier leaks which told us that up to 512GB of storage would be supported. Once again, the spec sheet incorrectly states that the Galaxy Z Fold 3’s 12MP camera sensor will be able to record 8K video.

For the most part, the triple 12MP array on the phone is identical to the Galaxy Z Fold 2, but there are a few minor upgrades here and there, such as PDAF support on the ultra-wide-angle lens. The cover display on the Galaxy Z Flip 3 will use a 10MP camera sensor for selfies, while the inner display will use a 4MP under-panel camera. The phone’s 4,400mAh battery supports 25W fast charging over a cable and wireless charging as well.

Both the Samsung Galaxy Z Fold 3 and Galaxy Z Flip 3 employ a side-mounted fingerprint scanner for biometric authentication. At this point, the only mystery is how much each foldable will cost, but we have a good idea about that as well, making tomorrow’s launch event somewhat predictable.