Samsung is making good on its promise to bring more Disney characters to the Galaxy S9’s AR Emoji feature by adding Donald Duck as an emoji option. An update to the AR Emoji camera mode is available from the Galaxy Apps store on the Galaxy S9, and once you install it, you will be able to make Donald Duck copy your facial expressions and also turn your voice into the gibberish that’s a hallmark of the world’s most beloved duck.

Donald Duck is the third character to be added to AR Emoji, following Mickey Mouse and Minnie Mouse. Samsung will also be bringing characters from newer Disney properties, such as The Incredibles (a sequel to which will be launching later this year) and Frozen, over the course of the year. If you haven’t yet tried out the Disney AR Emoji on your Galaxy S9, we have a nice little guide that can get you started quickly. If you already have Mickey and Minni Mouse emojis installed, you can add Donald Duck to the mix by downloading the AR Emoji update from the Galaxy Apps app on your Galaxy S9 or S9+.

You can also update through the Camera app. Open the app, switch to the AR Emoji shooting mode, tap the ‘+’ button at the bottom right, then tap the Mickey Mouse thumbnail, which will take you directly to the AR Emoji app listing on Galaxy Apps. Download the update, then go back to the camera to start using the Donald Duck emoji. And, while you’re at it, don’t forget to tell us what you think about the newest Disney emoji once you’ve had a bit of fun. 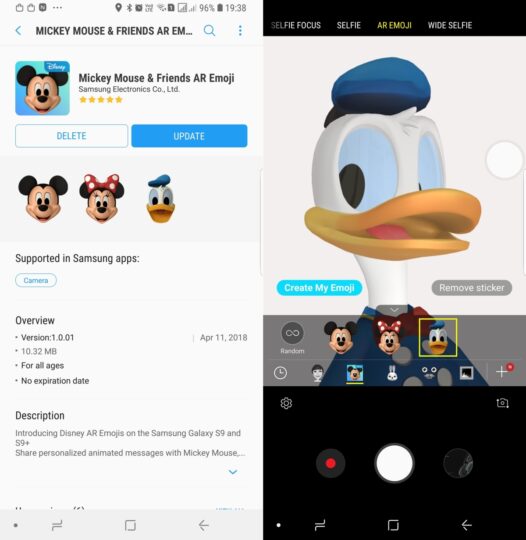 It’s been over two years since Disney Plus for Samsung smart TVs was released. The streaming service ha …