Samsung’s new redesigned and rechristened Galaxy Buds are receiving a software update as we speak. It’s a tiny update, but comes with a couple of important bug fixes. The update is rolling out with software version R170XXUOASC4 and weighs a mere 1.32 MB.

Apparently, Samsung’s new wireless earphones were not indicating the battery percentage correctly. The new update fixes this issue. You should see the accurate battery percentage in the Galaxy Wearable app going forward. The update also fixes a bug in the ambient sound menu. This is about the function that adds surrounding sound to your music, so that you know what’s going on around you. Lastly, the new update brings a more stable Bluetooth connection, though we cannot say we had complaints before.

To update your Galaxy Buds, open the Galaxy Wearable app while the buds are connected to your smartphone. A pop-up should appear if an update is available for your Galaxy Buds. You can also manually check for updates by going to the Galaxy Buds section of the app and then tapping About earbuds, followed by Update earbuds software, and finally, Download and install.

Have you updated your Galaxy Buds to the latest software version? Do let us know if you notice any difference after the update. 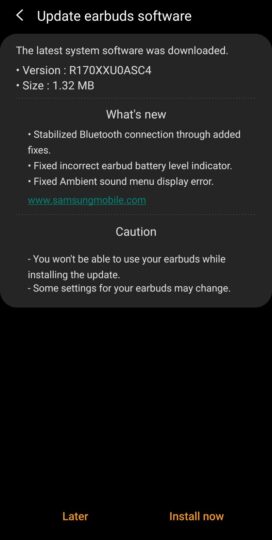